The items that were offered as 1940s retail pieces by Boleslaw Cybis’ studio were almost all done in conventional porcelain rather than the clay/plaster ‘papka’ material seen in 1940s Part One. The retail designs were in many cases a mixture of traditional Old World European and artistic interpretation (albeit not as ‘unusual’ as much of his studio pieces.) During this time period (1942 onward) the Cordey line coexisted with the “Cybis branded” one; after all, they were all being created in the same place until the early 1950s. Inevitably there ended up being much design overlap between the two.

If all of the 1940s retail items had been advertised and marked as either Cordey or Cybis, sorting them out would be much simpler – but unfortunately Boleslaw Cybis didn’t choose to do it that way. Some pieces were sold with Cybis marks while others were either marked with the Cordey name or with the Cordey numbering system but no name. As will be shown below, examples of the exact same piece have been found with one being marked Cybis and the other being marked Cordey, although in most cases the duplication wasn’t quite that extreme.

Compounding the confusion are some surviving 1940s department store newspaper ads showing pieces that appear to be Cordey designs… but do not mention that name at all. This ad from Bonwit Teller appeared in the May 10, 1942 Philadelphia Inquirer.  Notice that it says the horse is “by the artist Cybis” rather than saying it is a Cordey horse. (It also misspells the word “mantel” but we’ll let that go.) 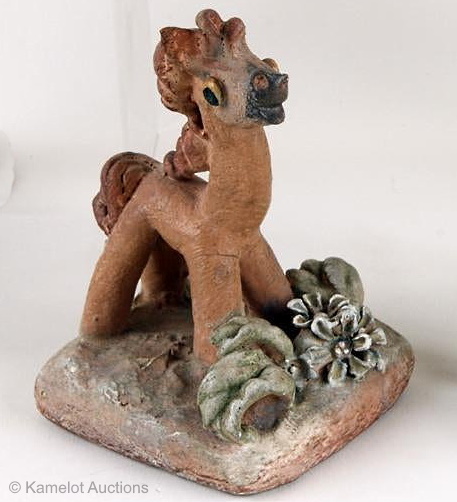 Here is this same item in real life. It was sold as part of the studio’s final liquidation in 2019. It had a modern Cybis signature applied to it by the studio prior to being offered for sale. 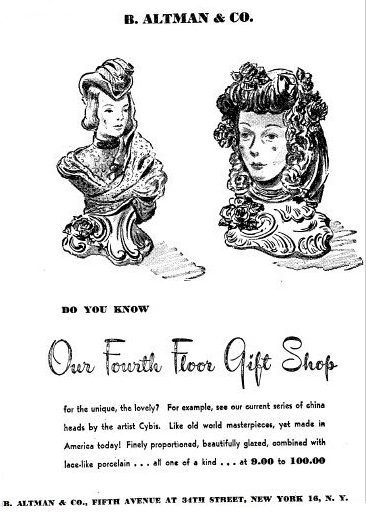 This April 19, 1945 NY Times ad from another major department store, B. Altman, also says “the artist Cybis” rather than “Cordey” – even though the bust on the left is almost identical to the vintage Cordey pieces regularly offered on eBay currently. One would assume that if the pieces being sold by the department stores were marked Cordey, they’d have been advertised as such… so why weren’t they? 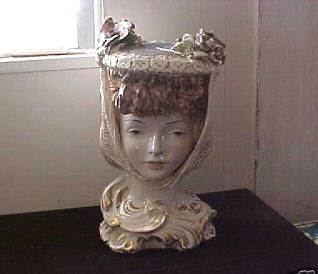 The answer is that they were probably marked the same way this hatted lady bust was, which is with the blue-painted M.B. Cybis signature even though she is very much a typical Cordey in design, construction, and decoration. It is 14″ tall and about 8″ wide. 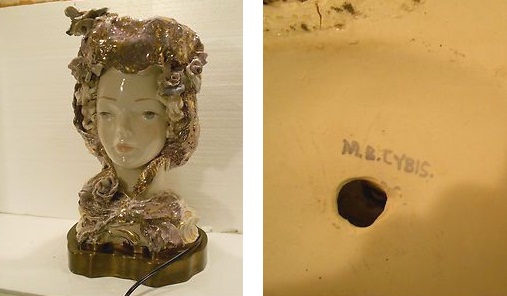 Here’s another M.B. Cybis signed piece, but this time leaning more toward the papka pieces seen in 1940s Cybis, Part One and also placed into a lamp base to convert it to a lady bust lamp. However, although lamps were definitely a feature of their Cordey line, this is the only one I’ve so far seen that has a Cybis signature on it instead. It doesn’t appear to be a later conversion, because the base shape so closely matches that of the lower part of the porcelain.  Another oddity is that it is numbered as #105 but that refers to a mold or design number because the studio did not begin the concept of limited editions until the 1960s.

The seller of the lamp described the base as being a brass-finished metal and the overall height as 16″. Unlike the typical Cordey lamps which include a vertical ‘pipe’ leading to the bulb and shade above, this one has “an opening on the top of the head for the light to shine out….when the light is on, the face has a beautiful glow to it.” The seller also cited it as having “a lot of gold plating and lavender coloring” although this isn’t immediately obvious in the photograph.

I’m quite curious as to how the Cybis pieces came to be sold in two (perhaps more) major department stores in the first place. Frankly, Boleslaw Cybis doesn’t sound like the type to have held business meetings with Manhattan buyers, so it’s likely that the negotiations were done by someone else – probably one of his two investor/partners in the Cordey brand line, Harry Wilson and Harvey Greenburg. 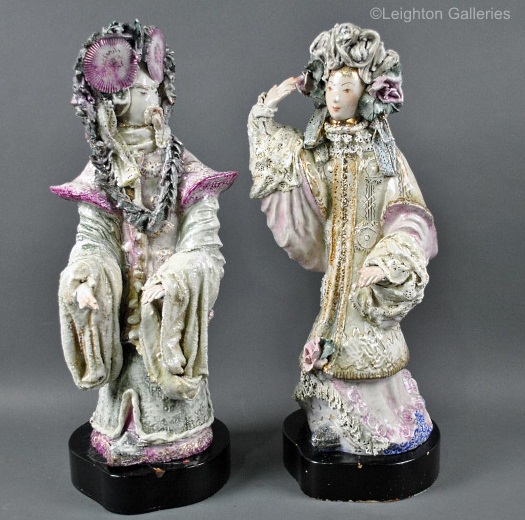 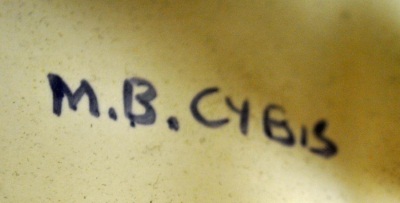 Here’s a case of a Cybis-signed design being identical to what was offered in the actual Cordey wholesale catalog. This Asian couple is 22″ and 24″ high; both are signed M.B. Cybis. (Note: both were cited as having losses and repairs by the auctioneer.) 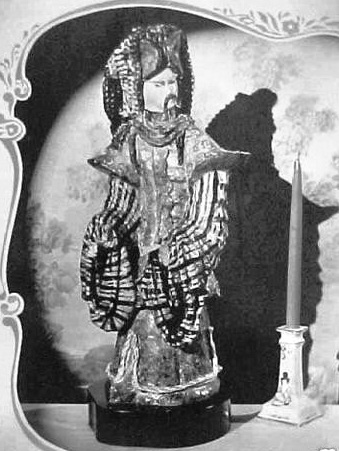 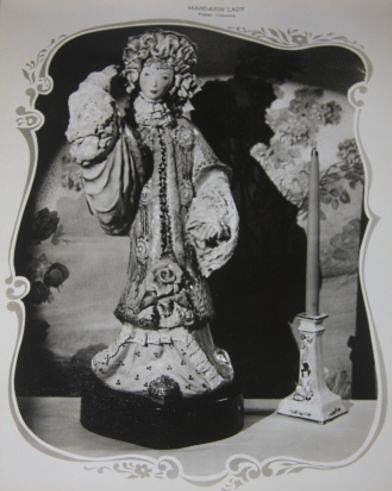 These photos appeared in a 1940s Cordey salesman’s catalog, captioned as “Mandarin Man” and “Mandarin Woman.” They are identical to the pair above that were signed M.B. Cybis but not signed as Cordey. 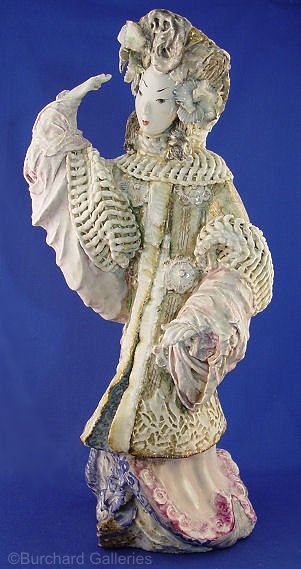 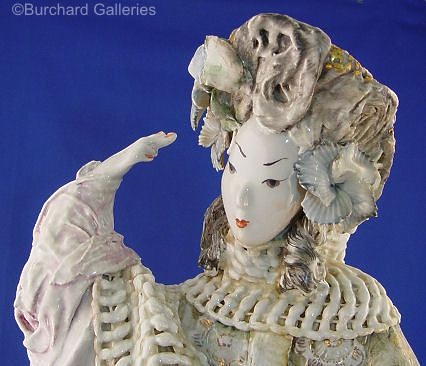 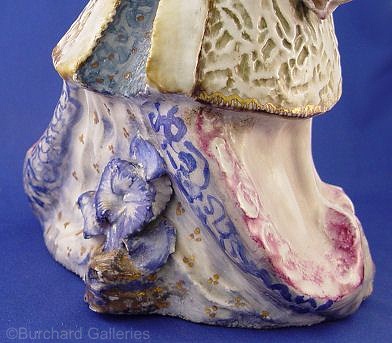 Another example of a Mandarin Woman that has an M.B. Cybis signature instead of Cordey. 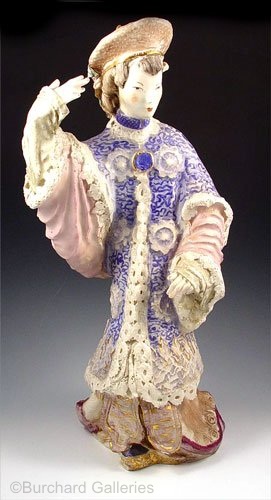 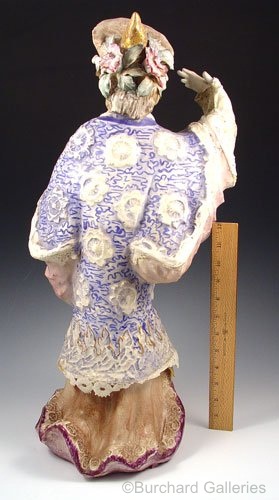 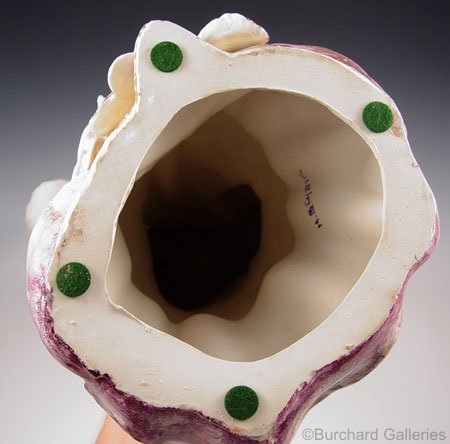 This Asian man was cast from the same mold as the Mandarin Woman, escept for the head; it is signed M.B. Cybis on the inside of the mold. 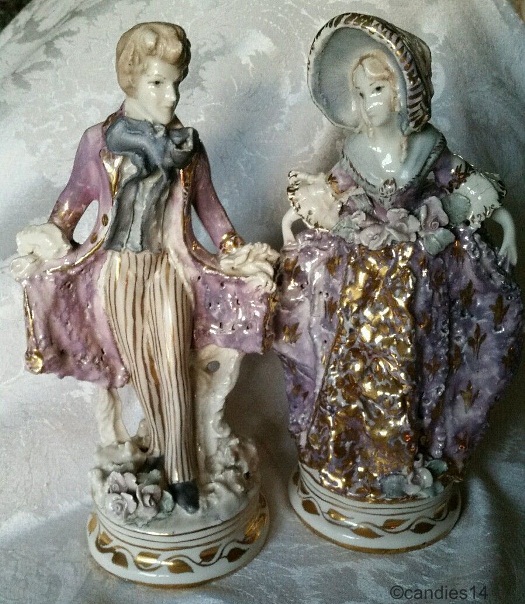 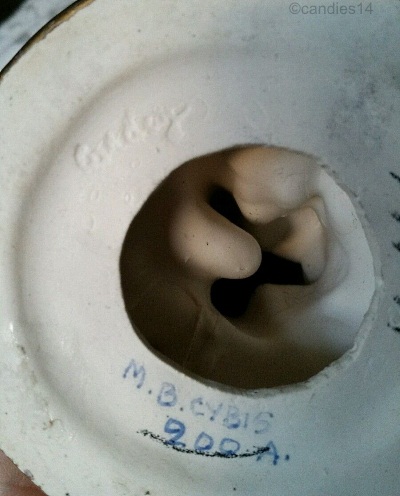 Here’s a pair that have dual signatures: both Cordey and M.B. Cybis (the first example shown in the 1950s Madonnas post also has a dual signature.) This couple is smaller, at about 11″ high, and is very much in their ‘olde world European’ style. These were clearly cast as a pair, shown by the design numbers being 200A and 200B. Note the lavender and gilt color scheme which probably is the same appearance as the seller of the lady-bust lamp above described. Because of the posture of the two figures I’m going to dub them the Dancing Man and Woman Pair. 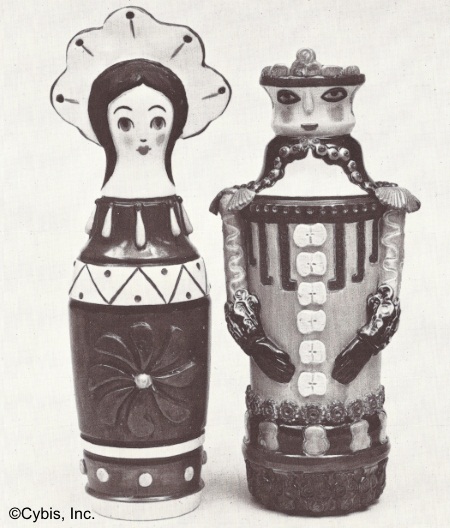 An entirely different 1940s style genre is seen in this pair of folk toys in glazed porcelain, cited in Cybis in Retrospect as being ca. 1944-1948. Both are 14″ high and are described as Folk Toy, Girl with Red Flower and Folk Toy, Boy with Red Hat. 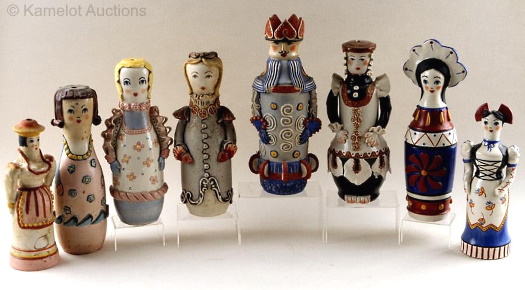 A group of folk toys was sold in 2019 during the studio’s liquidation. They are all about 14″-15″ high. Some have gummed Cybis stickers on them and some do not. 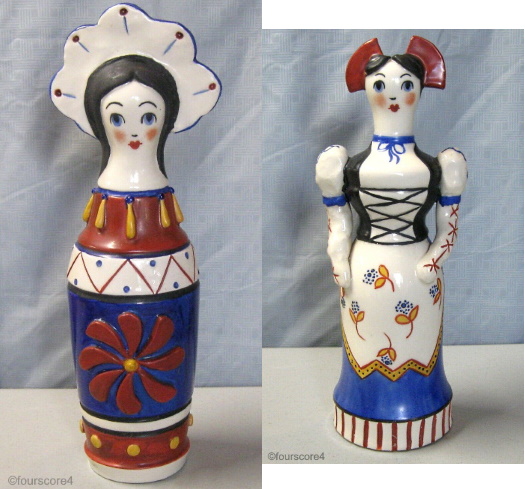 The folk toy at left is the same Girl with Red Flower pictured in the 1971 museum catalog. 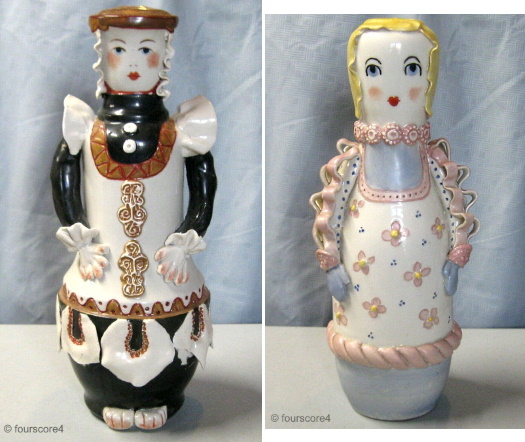 Two more folk toys from the auctioned group. All of the folk toys have an opening at the top of their head as shown in these two examples. 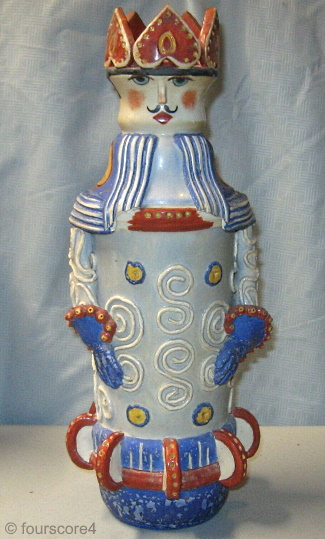 If this one was ever given a name, it definitely should have been the King of Hearts folk toy! 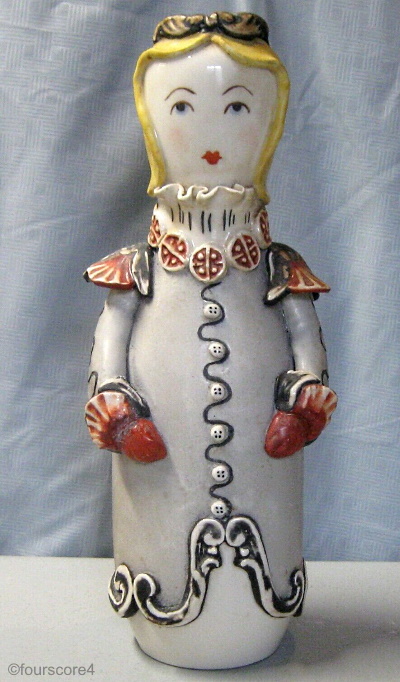 Many of the known 1940s animals were equines. There were two versions of an 8″ Winged Horse (ca 1942-1945), one of them being a Winged Horse with Black and Gold Wings. (How a “winged horse” would differ from a “Pegasus” I have no idea.) In addition to the 8″ Horse With Mane which was probably the one in the 1942 Bonwit Teller ad, there was also a 9″ high Horse in the same stained glass decoration. There were also as least three unicorns, apparantly between 8″ and 9″ high: a plain White Unicorn, a Black Unicorn, and a third listed simply as Unicorn. These were definitely different pieces because all three appeared in the 1971 museum show although none were pictured in the exhibit catalog. 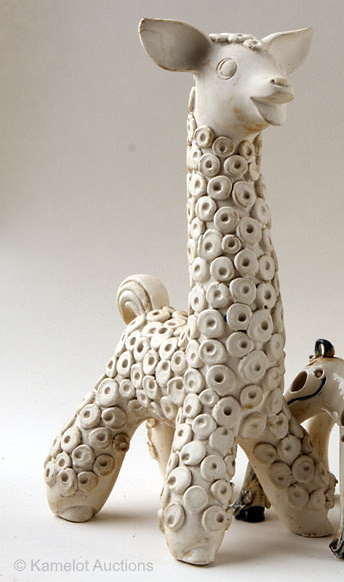 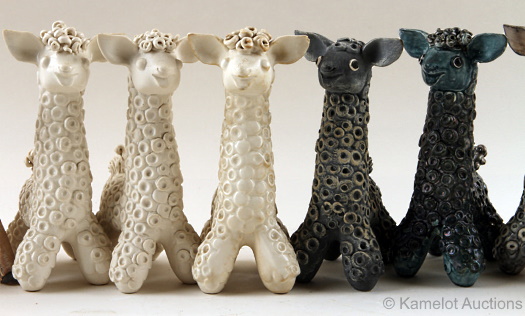 There was this glazed porcelain Large Llama at 14″ high, while the smaller version was described in Cybis in Retrospect as being a Sheep!! There was also a 9″ high Goat in a stained-glass finish.

The late 1940s seem to have been when the studio began to shift a bit more away from the highly glazed stained glass pieces into a combination of bisque (matte) porcelain with some glazed decoration. This would eventually evolve into pieces that were entirely bisque – except for any gold – by 1960. The human pieces appear to have been the first to show this change. Cybis in Retrospect lists several “Girl with…” pieces such as a 12″ high Girl with Roses (“bisque with glazed decorations”), a Girl with Violets and Roses, and a Girl with Pearls, the latter two being 10″ high. There was a piece called Mother and Child Heads as well, which was 14″ high (perhaps it had a pedestal component.)

An outlier was a 13″ high Woman’s Head in Terra Cotta; was this actual terracotta, or simply that color decoration/finish? This was cited as being actually dated specifically 1949 but see the Unusual 1960s Cybis post for a photo and discussion of a similarly sized and named bust that may or may not be the same piece (or later copy thereof.)

Three human studies were entirely in the now-familiar bisque porcelain in “color”: a Green Girl at 12″ high, a Gray Haired Girl of the same height, and an Old Man With Beard which was 14.5″ high (was this a bust or a full figure?) See this post for an in-depth look at many of the circa-1940s female busts.

And lastly there are two known tea sets. It’s possible they were cast from the same molds and differed only in color and pattern. 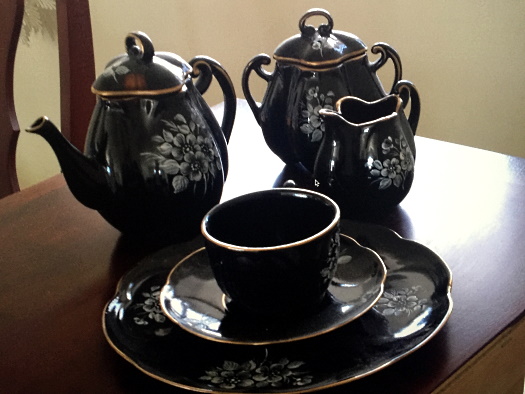 I’m very happy to be able to show, thanks to a member of Marylin Chorlton’s family, a photo of part of the set described in Cybis in Retrospect as Black Glaze with White Floral Decoration and dating from 1947. The set was lent by the family for exhibition in that 1971 museum retrospective, and — as lent — was comprised of ” two cups, two saucers, a teapot, sugar bowl, creamer and cookie jar.” Sadly, the entire set was never returned to the family afterwards, and only the pieces shown above (teapot, sugar bowl, creamer, a cup, a saucer, and a service plate) are now in their possession.

I do wonder if the rather awkward title (“black glaze”) was intended to mean “black, glazed, with white floral decoration” instead. In any event, it is certainly a dramatic combination of black, gold, and white and is very different from what one would probably expect to see from Cybis.

Another set, described in Retrospect as Yellow Glaze with Brown Leaf Decoration, had the same pieces they cited for the black one (except for the cookie jar) but was described as being from 1948 and the source/owner being the studio itself. Neither of these sets are the spatterware or lusterware reproductions which the studio was also producing during the same timeframe.