If I were to combine the words ‘Cybis’ and ‘lamp’, you’d probably assume I was referring to a Cordey item….and in most cases you’d be right. The lamps that came out of the Church Street studio were usually Cordeys, but surprisingly there was at least one lamp that emerged with a Cybis signature and entirely different style. The lamp base shown below was made in the 1940s as part of their spatterware reproduction range. This is the only one I’ve ever seen and it may be one of a kind. 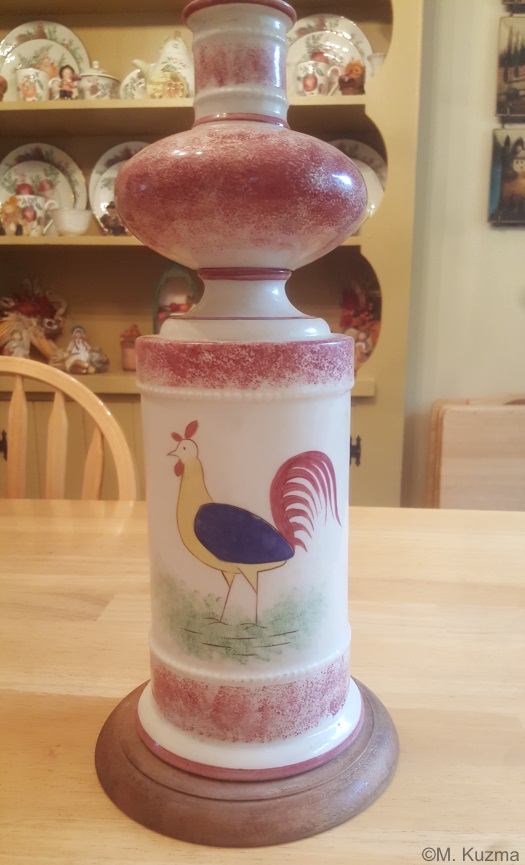 This red reproduction Spatterware Lamp was decorated in the classic Rooster pattern. 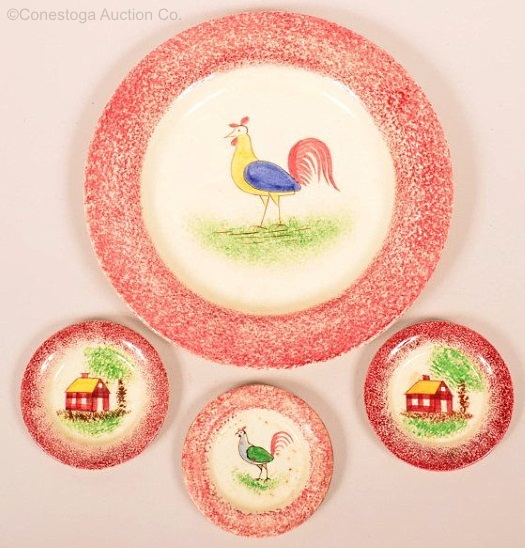 It would have been a match for the other Spatterware Rooster items Cybis produced, and begs the questions of whether there were also other such lamps done in green or yellow colorways. Of the three spatterware motifs that Cybis used (Rooster, Peafowl, and Schoolhouse) the Rooster was probably the most suited to a relativately narrow vertical object such as this lamp base. 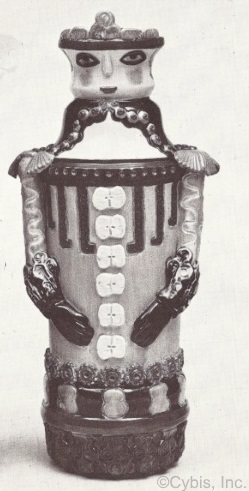 The shape of the main lamp base makes me wonder if it was adapted from the cylindrical mold used for the body of this 14” high Male Folk Toy that Cybis made during roughly the same time period. Certainly none of the Cordey lamps yet discovered are of this shape, and as for the other Cybis spatterware items there is nothing comparable either.

It is certain that this signature is not original to the lamp but was added by the Chorlton-owned studio later on. As discussed in my Copyright Years post, that symbol was not used until the early 1960s and this lamp was unquestionably made in the 1940s. So the lamp definitely left the Cybis studio sometime between the early 1960s and the 1990s. When they began selling directly to customers after 1990, Cybis put modern signatures and the copyright symbol onto legacy pieces from the 1940s when offering them for sale.

Unfortunately I don’t know the height of this lamp base but if it does utilize the same cylinder as the Male Folk Toy it is probably between 14” and 16” tall as shown. I wish I had additional photos of this item and so if anyone happens to come across another such example I would love to be able to add it here. There is a contact form at the link below.

There is also the possibility that this was a sample or experimental piece. The 1971 museum exhibit catalog Cybis in Retrospect does not mention lamps as one of the spatterware categories produced but is far from a complete source regarding the output of the studio.