Sculptors, moldmakers, assemblers, and painters were not the only artists who contributed to the success of the Cybis porcelain studio. Print advertising was critical in those pre-Internet decades.

Images of Cybis sculptures appeared in two formats: photographs, for use in their catalogs, brochures, and magazine ads; and illustrations, for use in newspapers. Although a photocopy (no scanners in those days!) of a photograph could be translated into black-and-white newsprint, the result was muddy and not very appealing compared to the original photo.

At left is a section of a 1977 Cybis retailer ad in the New York Times that utilized a photocopy of the stock Cybis photo, compared to a similar actual photo of the Eskimo Child Head ‘Snow Bunting.’ Even allowing for the higher quality of today’s digital images, one can see how much detail was lost via the copied-photo method in newsprint.

For newspaper advertisements, camera-ready illustrations were the best way to go. When a Cybis retailer wanted to advertise a sculpture in a newspaper – which many did, given the much higher cost of even a small color magazine-page space – they would obtain an illustration from the Cybis studio and provide it to the newspaper as an “ad slick.” In most cases the sculpture’s descriptive text matched whatever was in Cybis’ own marketing material; I don’t know whether this was a contractual thing or if the retailers didn’t want to bother writing something of their own!

The Cybis studio employed freelance artists to create the illustrations that their retailers would, in turn, use for their ad slicks. Between the summer of 1977 and the end of 1980, artist Cyndy Bohonovsky created some wonderfully detailed illustrations for Cybis. She was a recent graduate of the Spectrum Institute for Advertising and the Arts, in Hillsboro, New Jersey when she did her initial assignment for the studio; in fact, she credits them for launching her career with her first job. She remembers Joe Chorlton who, despite still mourning the loss of his wife Marylin only a few months previously, was always welcoming and encouraging to her as a fledgling artist.

I have had the pleasure of speaking and corresponding with Cyndy and am pleased to be able to show some of her Cybis work here. Each is shown with its corresponding sculpture model; detailed information about them may be found via the Archive’s alphabetical index. 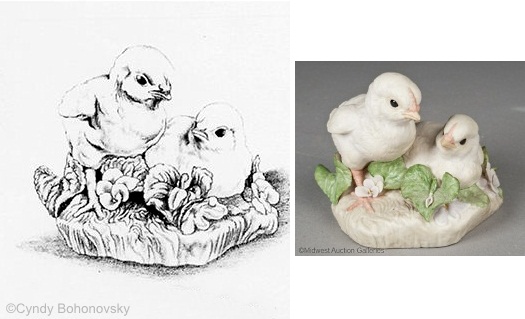 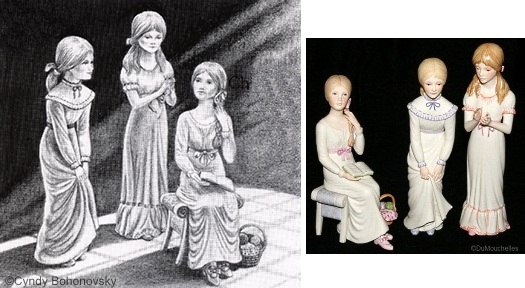 The Childrens Hour group, from left to right in illustration: Allegra, Edith, and Alice

Cinderella at The Ball 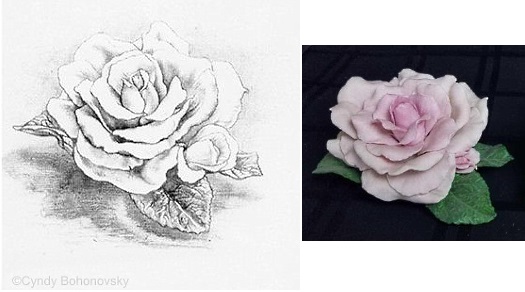 Jeanie with the Light Brown Hair

Kara, Girl on the Beach 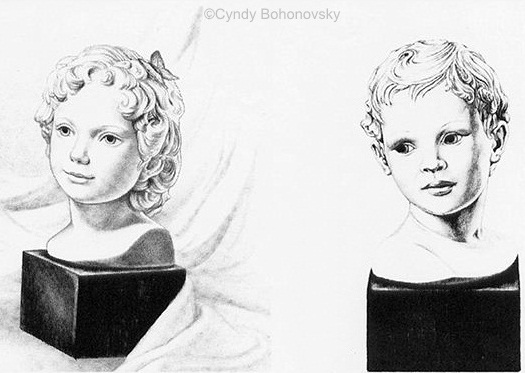 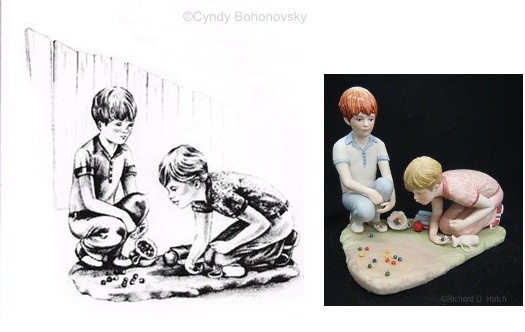 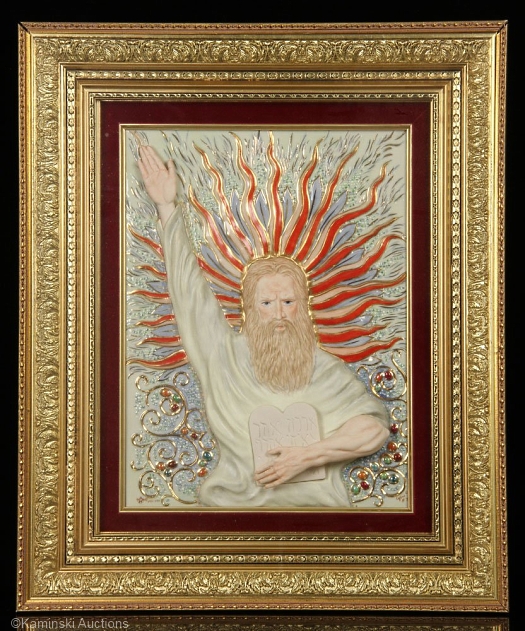 This is one of the plaques that was based on the 1970s sculpture Moses, the Great Lawgiver. The plaque is 12” x 16” unframed, and all the painting was done by George Ivers who was the studio’s art director at the time. Cyndy’s  assignment was to do a watercolor copy of this plaque, although she was not told for what purpose.

As you can see, her painting is a remarkably beautiful rendition that is – in my opinion – even more powerful and evocative than that of the bas-relief porcelain plaque itself. It is much closer to the spirit of the original sculpture which was done by Laszlo Ispanky in 1963. The watercolor is not framed; the frame is part of the painting and is done in gold ink and pencil. It measures 14.25” x 17.5” overall.

The plaque and the watercolor were offered together as a single lot by a Pennyslvania auction house in 2013 and sold for $1500 plus a 23% buyers premium. It must be noted, however, that the auctioneer erroneously described the painting as having been done by Boleslaw Cybis himself. Unfortunately the Cybis studio did not permit their freelance artists to individually sign their commissioned work, leading to a mistaken assumption on the auctioneer’s part. 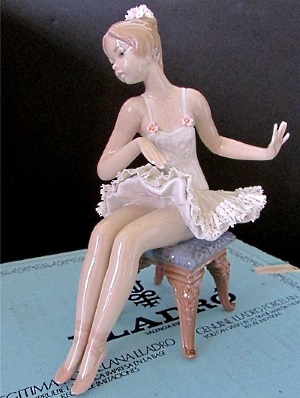 Because Cyndy was a freelance artist she also did illustration work for other porcelain and giftware studios. Here her drawing of Lladro’s ‘Recital’ appears in a Geary’s newspaper ad.

This is a concept drawing for an angel figurine proposed by The Bradford Exchange.

As we all know, the Walt Disney Company licenses a lot of products (that may be understatement of the century!) of all types, uses, shapes and sizes. But licensees cannot simply go ahead and produce adaptations of copyrighted Disney designs willy-nilly; they must adhere to what are called “style guides.” A style guide tells whoever is designing a Disney-licensed item how they must create that item: the face must be just so, the colors like this, the clothing like that, and so forth. Disney has a plethora of attorneys whose job it is to make sure that every item bearing the Disney logo is acceptable to Disney, and they will land like a ton of bricks on any unfortunate licensee who doesn’t toe the mark. Someone representing Disney must create style guides for the licensees to follow.

Cyndy Bohonovsky became a specialist in Disney style guides, particularly for the beloved Disney Princesses. Many of the Cinderella, Sleeping Beauty, and other Disney character products you see for sale were created following one of Cyndy’s style guides. She also developed style guides for Warner Brothers Looney Tunes characters and the iconic Betty Boop from Fleischer Studios. (Links to galleries of her work and guides will follow at the end of this post.) She also produced a style guide based on the 2014 movie Rio 2 from Blue Sky Studios.

During the 2000s Cyndy designed an exceptional original series of Disney character figurines for Enesco, one of the major giftware distribution companies and perhaps most widely known for their connection with the popular Precious Moments line of porcelain figurines for more than twenty years. Cyndy’s concept was to combine iconic Disney princesses and villainesses with haute couture adaptations of their classic ‘look’. The title of the line is a combination of “couture” and “tour de force” and it was launched with a group of seven characters: Princess Aurora (Sleeping Beauty), Belle, Cinderella, Snow White, Maleficent, Cruella deVil, and the Evil Queen.) The figures were produced in a stone-based resin material that allows for fine detailing and rich color depth.

This is the Couture de Force ‘Belle’. An official description reads

“A tale as old as time!” — Disney Couture de Force is a stunning collection featuring Disney’s reigning princesses and vampy villains dressed up in haute couture. No detail is overlooked, from faux jewels to opalescent paints that bring each sculpture to life. This 7.85” stone resin figurine features Belle from Disney’s 1991 classic “Beauty & the Beast.” She holds the film’s pivotal rose in one hand, while she swirls an elegant full-length ball gown. Intricately detailed pearly and floral accents complete the ensemble!

Although the Couture de Force line was originally the property of Enesco, Cyndy eventually acquired the rights to her creations and now offers them directly.  Each is signed and comes with a COA and a portfolio of the concept art for the series.

It is nice to know that such a talent as Cyndy’s was first launched as part of the Cybis studio’s “golden age”  and I’m sure that yet more of her art will be forthcoming. Additional information about and examples of Cyndy’s work can be found on her Behance and Facebook pages and on Twitter as @animationartest