The 1964 World’s Fair, held at Flushing Meadow Park in Queens County, NY, coincided with the first several years of the ‘golden age’ of the Cybis porcelain studio. It was also the first large-scale opportunity for Cybis to be seen by many people who would have otherwise been unaware of the studio’s existence.

The Fair itself was rather a boondoggle from the start, and things didn’t improve during its short run. Technically, it was not even an “official” World’s Fair at all! Such events were normally conducted under the auspices of the Bureau of International Expositions (BIE), an organization that the USA did not belong to but which the Fair organizers wanted an endorsement from. Disagreements between BIE and Robert Moses, the CEO of the corporation tapped to run the event, resulted in the BIE asking its member nations to not participate in it at all. Some forty of them did have exhibits anyway, but several major nations did not.

The Fair ran for two six-month stints, from mid-April to mid-October in both 1964 and 1965. Admission for adults was $2 and $2.50, respectively, and $1 for children under age twelve. I will (sort of) admit my age here by saying that although I did go to the Fair, I paid the adult rate…but not by much! 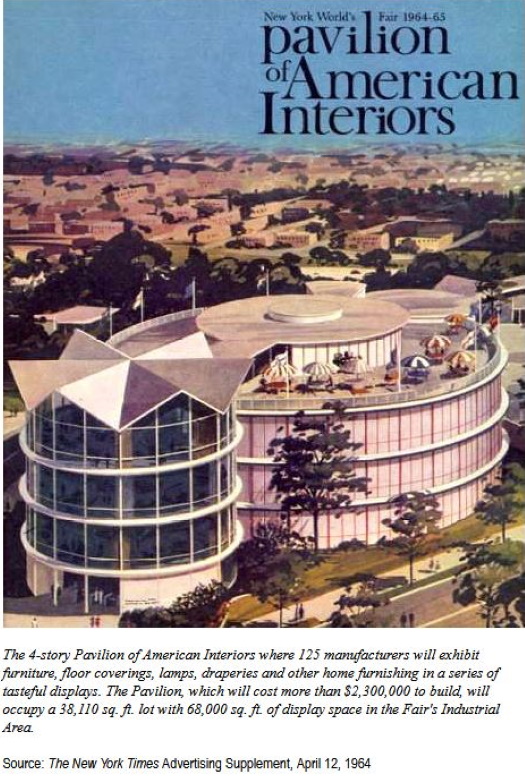 The Cybis exhibit was located inside the Pavilion of American Interiors, rather than inside the New Jersey Pavilion as one might assume it would be. This was a four-story, circular building that contained 14 room settings featuring pretty much anything that goes into the décor of a house: tableware, furniture, fabrics, lighting, decorative objects, etc. Some of the exhibit spaces were designated by individual states – for example, Florida, Georgia, California, Texas, and ‘New England’ – but there was not one from New Jersey. A list of exhibitors in the Pavilion does not include the Cybis studio. The Pavilion’s site was not optimal, being along the edge of the Fairgrounds, and didn’t get a great deal of traffic. In fact, it was bankrupt at the end of the first season and had to take out a $400K loan from the Fair’s corporate management, who only received about $130K of the loan back. To add insult to injury, the Corporation also had to spend $42,000 to demolish the building afterwards!

The Cybis studio produced two pieces of literature in connection with the Fair: a brochure, and a catalog which appears to have been their first.

Although the covers of the first (1964) and second (1965) printing of the catalog are identical, the back cover designates the 1964 edition as a ‘World’s Fair Commemorative.’  The catalog sold for $1.

This brochure was available at the exhibit site as well as at whatever retailers carried Cybis at the time. It shows only three sculptures, with their current prices: the Baby Owl at $18, Ballerina ‘On Cue’ at $75 for white and $100 for color, and the Dahlia at $450. The dahlia was a new introduction in 1964 and was the most expensive piece in the studio’s line, other than the Holy Child of Prague whose price would have given most prospective collectors a case of terminal sticker shock.

This is the Cybis exhibit at the 1964 World’s Fair. Although I remember seeing the Crown Crested Crane and marveling at the workmanship, I cannot even remotely recall where in the Pavilion this exhibit was located. The above photo was taken by a gentleman who kindly gave me permission to use it here, but I have since somehow managed to completely lose his contact information/attribution in the intervening two years. (If you happen to see this, please let me know so that I can credit you properly! My face is red with shame.) Notice that the logo on the wall is the ‘slim horizontal phoenix’ which is a design that the studio used on their price lists and brochures from 1964 to 1970; the phoenix was redesigned in 1971.

The crane was never listed in Cybis literature as being for sale, but only as a one-of-a-kind piece made for the Fair exhibit. I have never been able to determine what happened to it after the Fair ended. The Iris retailed for $500 at the time, and Moses for $250; both had been 1963 limited-edition introductions. 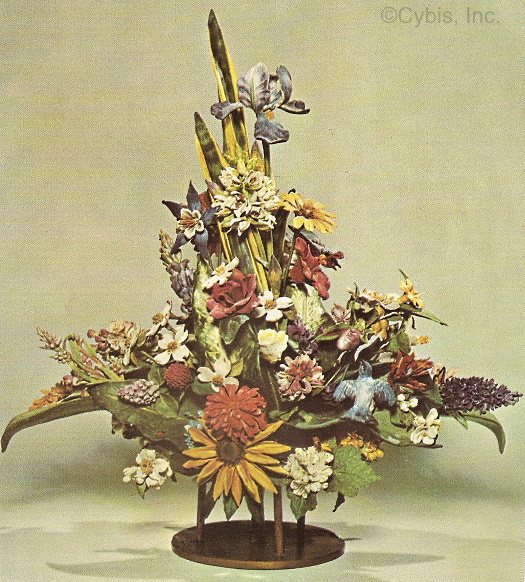 The other Cybis piece known to have been made for and exhibited at the 1964 Fair was the Flower Bouquet of the United States, whose full – and somewhat convoluted – story is told in its own Archive post. I have no idea whether this piece was part of the exhibit photographed above but simply not in the picture, or whether it was displayed elsewhere. None of the Cybis publications say exactly where at the Fair the Bouquet was located. Given the subject matter, it could possibly have been inside the US Pavilion or the New Jersey Tercentenary Pavilion, if not in the American Interiors one. The photo above is the one that Cybis used in one of their 1970s publications and does not reflect the appearance of the same item today; see the post for an explanation of why.

An example of the Holy Child of Prague was also on display. This small edition of only 25 took years to complete. The info-card near the display is, sadly, rife with grammatical errors (if you are morbidly curious, I break them down in the Child of Prague post.)

The Fair’s fortunes went from bad to worse after October 1965. Almost all of the exhibits had gone over budget, some (such as the Hall of Science) doubling their original figure. Only about 52 million people attended, which was less than half of what the organizers had anticipated. Although the Fair charged rent to their exhibitors (nations, states, and corporations) they had to write off all but $134,000 of the $3 million that they were supposed to have received.

In 1967 the City of New York issued a report on the fiscal operation of the 1964/65 Fair. It had a net operating loss of $21 million, almost all of which occurred during the first season of operation. (The organizers had been predicting a $50 million surplus.) The only reason that the 1965 season wasn’t a repeat of the disastrous 1964 one was that the operators drastically cut back on services. They were definitely between a rock and a hard place:

The Fair was faced with the dilemma of either evicting delinquent tenants with the consequent denuding of large portions of the exhibition area, or to continue to subsidize concessionaires so as to give the appearance of full occupancy. Management chose the latter course and in a few instances the Fair chose to advance monies to insolvent firms for the same reasons. In so doing, it had to charge off as bad debts more than $6 million of accounts and loans receivable.

Then, of course, almost all of it had to be demolished. The plan required that 122 of the pavilions be leveled within 90 days of public closure. But…

The Fair Corporation’s failure to enforce the demolition security deposit requirements under the lease agreements with exhibitors resulted in additional expense for the Fair since many exhibitors defaulted on their obligation to demolish their pavilions. The cost of demolition consequently had to be borne by the Fair without, in most cases, any chance for recovery of such a cost from the parties involved…. However, when it became apparent that the Fair Corporation would be unable to complete its post-Fair demolition and restoration work within four months after closing the exhibition period on October 17, 1965, as required under the lease agreement, the extension of the post-Fair period to December 31, 1967 required an upward revision of post-Fair general and administrative expenses to $4.3 million, a threefold increase of the original estimate for this category of expense.

It had all the appearance of a classic organizational debacle, enhanced by Murphy’s Law and just plain incompetence. An article in the New York Times on November 28, 1965 paints a bleak picture:

The former city of lights in Flushing Meadow today is a city of litter. A lonely wind toys with the piles of rubbish, left-over brochures, discarded food and drink containers and other debris that still dot the site that was the New York World’s Fair until six weeks ago. The debris and scraps of garbage, some postfair frequenters contend, are making the deserted fairgrounds a haven for rats.

One problem no official could have anticipated cropped up Nov. 5 when workmen were tearing down the Moroccan pavilion. The men stumbled over an unmarked crate. The lid moved ever so slightly. When the crate was opened, an Egyptian cobra popped up.

Some fair visitors, enamored of a particular piece of sculpture, a light fixture, table or chair, have been returning to the fairgrounds since the closing to negotiate purchases with pavilion owners. Others have come back for the public auctions held in pavilions by contractors who purchased the buildings and whatever they contained from the exhibitors. At the Indonesian Pavilion, for example, 126 whisky sour glasses went for 18 cents apiece.

In June 1967, the cleaned-up site was officially returned to the control of the Parks Department of the City of New York and re-named Flushing Meadows-Corona Park. A year later, the Queens Zoo opened on part of the acreage. The geodesic dome, left intact, served as an aviary; the tall heliport became a restaurant called Terrace on the Park (we went there once; the food was nothing to write home about.) Things went well for a few years until a fiscal crisis hit NYC during the 1970s and the site fell into major disrepair due to neglect and vandalism. The Federal and NY State pavilions had to be torn down due to the extensive damage. In the late 1970s, the US Tennis Association stepped in and revitalized the site, which now holds the Arthur Ashe Stadium. Today the former World’s Fair site is one of NYC’s best-known parks, but it certainly had a very rough road getting there!

The remaining mystery surrounding Cybis at the 1964 World’s Fair is the fate of the Crown Crested Crane. I have been told that the Flower Bouquet did not come back to the studio after the Fair closed (this from three people who were employed at the studio at the time, including one who made some of the flowers on the Bouquet herself), and thus was sold privately. Did the same thing happen to the Crane? No trace or mention of the Crane has been found since it was in the Pavilion exhibit (and why was Cybis not included in the exhibitor list?) and it was not among the items that that studio’s owner liquidated via auction in 2019 and 2020. The Cybis building has been emptied and sold. If anyone has seen or heard of the Crown Crested Crane since September 1965, I’d love to hear from you and find out what happened to it! There is a contact link below. Let’s hope that it, like the Fair site, ultimately came to a happy ending.