Until recently, if someone had asked me whether Cybis ever produced any porcelain jewelry, I would have answered in the negative. None of their price lists or other publications included any such items, and none appeared on their web site. Several years ago I did come across two small stickpins that were described as “an advertising gift for retailers,” but that was all.  Jewelry simply didn’t appear to have been the Cybis studio’s “thing.”

However, one of the 2019 liquidation sale auction lots contained a surprising number of small jewelry pieces amongst various other bits and bobs of miscellaneous small and/or orphaned items that had once been part of larger pieces. The jewelry items may have originally been intended as promo pieces, or may have been sold only at the studio itself during the 1990s when they opened their showroom to retail sales. There were enough examples to warrant an Archive post specifically about Cybis jewelry, whether porcelain or otherwise. 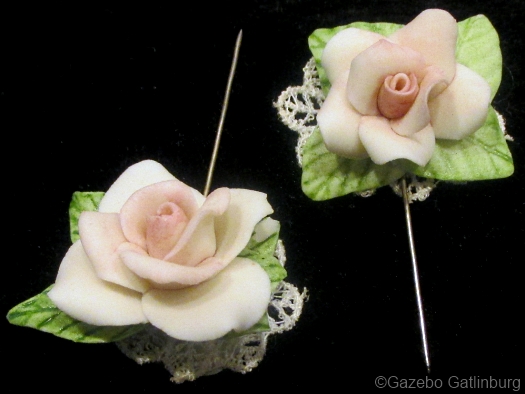 These are the “advertising gift” stickpins. The porcelain rose and leaves are backed by a medallion of actual lace on top of a small disk to which the metal pin is attached. The floral element is 1.25” in diameter, which means that the length of the stickpin overall is probably about three inches.

This assortment was part of the 2019 auction lot. One of the lace-backed stickpins appears to be “real” (fabric) but I am not sure about the other four, which are also a slightly different color. If you look closely you will see that those appear to be “cupped” rather than lying flat on the table as an actual piece of lace would do. Were these dipped in slip, similar to what the Cordey artists once did with lace and fabrics? A few of the roses have a different shape and/or include buds. The stickpin with no leaves somewhat resembles a hellebore, the so-called ‘Christmas rose.’

I wish there had been photos taken of the backs, so that we could see whether the two non-stickpin roses are stud pins or earrings. 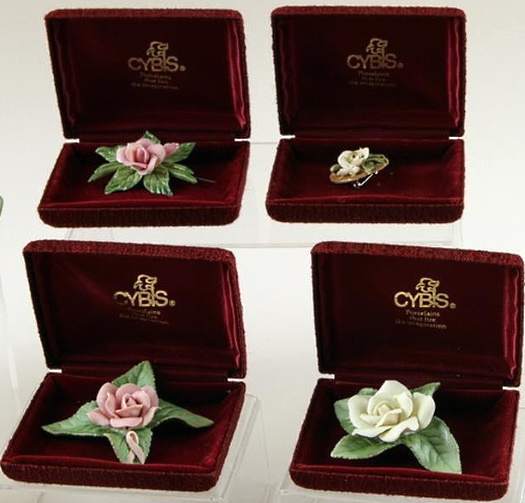 These are definitely brooches. A rollover bar clasp can be seen on the back of the small white rose at the upper right; this “disk-backed rose” is also seen in the previous photo as a stickpin. The rose-and-bud pin at the upper left is either a stickpin with a very short ‘stick’, or a bar clasp that is open rather than closed.

The lower two brooches are both the Mini Rose: one in white, and the other in pink with a breast cancer awareness pink ribbon added. The studio did offer this rose on its web site during the early 2000s as a miniature sculpture for $99, and also without the pink ribbon for $95. The web site did not mention a brooch alternative.

This is the non-ribbon version. The Cybis web site described the Mini Rose as being 1” high and about 3” wide, which seems a bit big for a brooch. 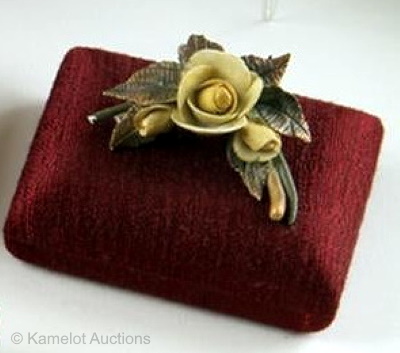 This yellow rose brooch is something I have not seen elsewhere. The bar clasp (“top”) seems to be behind the shorter end. 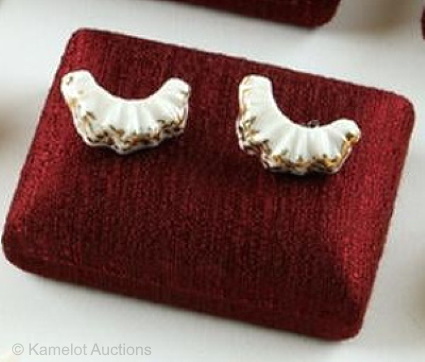 These are earrings; I wonder if they are for pierced ears or are clips. These must be from the molds of a part of some sculpture’s costume – probably a collar or sleeve edge. A quick scan of the circus themed pieces revealed no candidates, nor did the the ballet pieces (at least not clearly.) I suppose I will be looking at a photo someday, years from now and completely at random, and suddenly exclaim “Oh, that’s where the earrings came from!” 🙂

This tiny pin/pendant was made for Cybis by Terryberry, a longtime producer of promotional jewelry items.  Terryberry customers have a choice of metal finishes as well as a tiny gemstone accent if desired. In this case it was a gold-plated finish and small diamond. It was cited as being ½” which I assume means the width. This was something that was probably given to high volume dealers during the 1960s or 1970s.

Employees of the Cybis Studio received this miniature (1/4″ x 1/8″, or 1.3cm x 1cm) phoenix logo brooch. The reverse has two marks: STERLING (the plating is probably 10k gold which classifies it as vermeil) and an unusual arrow logo that I’ve been unable to associated with a maker; it’s definitely not Terryberry’s. Due to the tiny size I can’t get a clear photo of it, but it is an arrow going lengthwise through what looks like an egg. Perhaps it was produced by a local Trenton jewelry company.

The Boehm studio incorporated porcelain jewelry items into their retail line, whereas Cybis did not. Boehm produced about two dozen jewelry pieces – mostly brooches but at least four pendants as well – for retail sale before that studio was sold in 2003. However, with only a couple of exceptions, the Boehm jewelry items lack the delicacy seen in the Cybis ‘rose’ jewelry.

Images of Cybis porcelain sculptures are provided for informational and educational purposes only. All photographs are copyrighted by their owner as indicated via watermark and are used here only as reference material. Please see the copyright notice in the footer and sidebar for important information regarding the text that appears within this web site.