Cybis produced a variety of decorative porcelain eggs from the 1950s through the 1980s. All of them were non-limited editions. 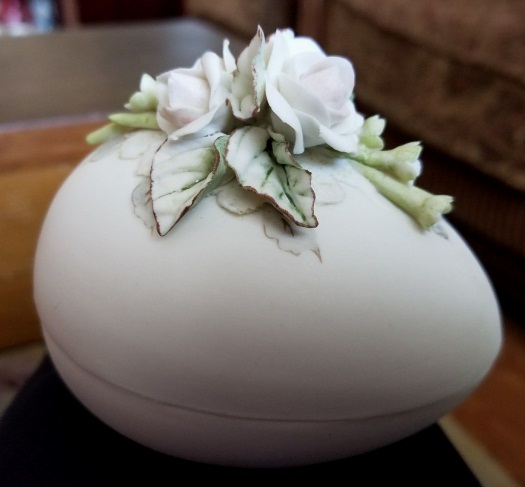 The 1971 Cybis in Retrospect exhibit catalog mentions this Egg Box that was produced from the mid-1950s to the early 1960s. It is described there as being 4″ high, and this one is 3.5″ high (also 4.5″ long x 2.5″ wide.) I suspect that this is one of the two that are included in a text list of verified Cybis sculptures in their 1974 catalog: either the Small Egg with Flowers or the Large Egg with Flowers. However, on the same list there is also an Easter Egg Box – Large, and an Easter Egg Box – Small…. so until I find photos of more 1950s “egg” items we can’t be sure which was which. All of these were signed Cybis and so it’s possible that a photo of one or more will turn up eventually. According to Retrospect, the 4″ high egg box was produced in the “bisque decorated” (shown above) and also in their glazed “stained glass” colors. On the Spring 1963 price list, the one shown above sold for $15; the stained glass version was no longer made. 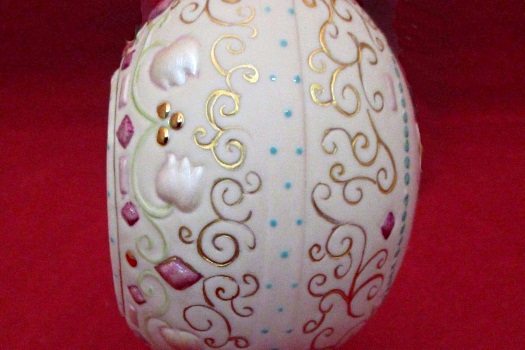 In 1983 Cybis introduced their first Annual Decorative Egg at a retail price of $295 and announced that a different egg would be issued each spring, produced for that single year only. Shown at the far right in this photo, this egg depicts a spray of lily of the valley and is decorated in lavender with 24k gold accents. Scrolls, diamond shapes and dots decorate the sides and back. It is the smallest, at 5” high. When the Franklin Mint did their version of a Cybis egg as part of their “Decorative Eggs” series in the late 1980s, they used a very similar design. Unlike the Franklin Mint eggs which had separate goldtone bases, the Cybis eggs are affixed to their porcelain ‘pedestals’.

The 1984 Cybis egg (shown second from left) was a very different design. It incorporates a mesh pattern, vertical bands of red foliage, and a motif of violets on the base and at the apex. This egg was $325. 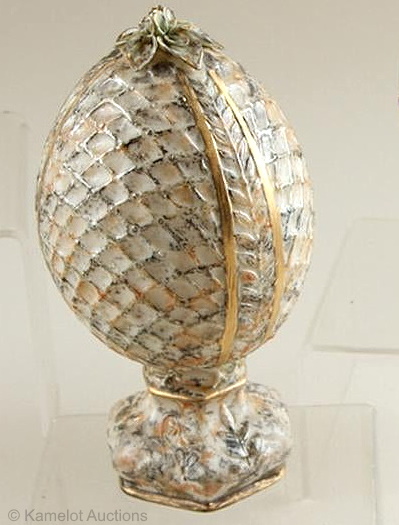 The studio’s experimental mottled painting of a 1984 egg didn’t (in my opinion) turn out nearly as well as the retail version.

Second from right in the photo, the egg for 1985 has a more classical look and I think actually has a bit of an autumnal feel with its yellow and peach tones. It has the least amount of 24k gold trim and in my opinion is the more attractive for it. This is the tallest of the eggs at 6.5” high. I do not know the price of this egg.

What ultimately became the final egg in the series, with a design of blue forget-me-nots, was issued in 1986. Perhaps the collector response to the egg series was not as enthusiastic as the studio had hoped. Issue price is unknown at present.

Unlike most Cybis which came in a generic Cybis-logo white corrugated cardboard box, the annual eggs were sold in the specially fitted satin-lined presentation box like this one. The four annual Angel Ornaments from the mid 1980s also had similar boxes.

Nevertheless, in either 1989 or 1990 the studio issued the Egg Embellished with Gold which is the 1985 annual egg but instead done in white bisque with 24k gold trim and no other colors. It sold for $395 during the 1990s.

As part of the special sculptures that were introduced in 1976 to commemorate the Bicentennial, Cybis created the Egg Vase with Eagle Lid. It was 5” high including the lid and like the other Bicentennnial sculptures had a production run during that single year only. Other  patriotic themed Cybis offerings can be seen in Born in the USA.

Another experimental paint job was this Egg Vase in silver, red, and white. The lid is missing and a firing crack can be seen on the inside near the top edge.

This is one of several ‘test pieces’ of an unreleased commemorative egg on a plinth, probably dating from either 1976 or 1987. Additional photos can be seen in the Born in the USA post showing various patriotic Cybis pieces.