Continuing the review of Cybis’ literature-based portraits naturally leads to their interpretations of characters from Greek, Roman and Chinese mythology. All but two were limited editions. Considering the wealth of subjects from which to choose, it seems a bit surprising that relatively few designs were created in this genre.

The actual appearance of the first two mythological studies is unknown. One, titled Greek Head, is known only from a single text list of names in the 1974 catalog; I am going to assume it has a mythological connotation until/unless I can discover more about it. That list provides no details and so my assumption that it dates from 1960 or later is based on an educated guess. It is, of course, possible that this was a 1950s piece even though the majority of those were religious in nature.

A definite mythological study was Europa and The Bull which appears on the Spring 1963 price list as a limited edition of 200, in white bisque only, for $350. Size is given as 18″ which, if it refers to height instead of width, indicates a very large piece. Introduction year is unknown but it does not appear on the next chronological price list I have, which is 1967. If anyone has one of these, I would very much like a photo; there is a contact form link at the bottom of this page.

The first firmly-dated mythological sculpture is Bull ‘God of the Thunderbolt’ which was released in 1960 as a limited edition of 100 and completed in 1965. His name combines two of the most common symbols associated with Zeus/Jupiter: the thunderbolt and the white bull. It is 12” high and 14” long, which dimensions effectively eliminate him as having been part of Europa and the Bull; they both appear on the 1963 price list but there his name is shown simply as Bull. It’s likely that the ‘Thunderbolt’ appellation was added after “Europa-and-” was completed or closed. It would be helpful to find a price list from 1964-1966 to determine when that happened and when this piece’s name was expanded.

Chinese Goddess ‘Kwan Yin’, the Buddhist goddess of mercy and compassion is 13.5” high. Produced only from 1972 – 1976, the original declared issue of 750 was supposedly (see below) closed after only 350 were created. Her retail price went from $1250 to $1450 during that span. She was originally sold with an accompanying vitrine but it’s not known when (or if) that practice was discontinued.

This piece was designed by Harry Burger, who also created the Cybis Chess Set given to the USSR at the 1972 Moscow Summit. Other spellings of this deity’s name include Quan Yin and Kuan Yin. In some parts of the Buddhist world this deity is male and named Avalokiteshvara Bodhisattva, “the lord who looks upon the world with compassion”, but in China she is female. The lobster upon which she stands may represent the Buddhist tale of the farmer and the lobster. The farmer protected the lobster, who lived in a nearby pond, from being caught by others for food. A crow and a snake who also lived nearby hatched a plot between them to attack the farmer, but the lobster defended his benefactor, killing the crow and snake before the farmer could be harmed.

There is a puzzle about the edition size of Kwan Yin. According to the 1979 Cybis catalog, which was published three years after Kwan Yin’s edition was completed, the original declared edition of 750 was reduced to 350 (as I cited above.) However, in recent months two undoubtedly authentic Kwan Yins have come to light which were numbered #401 and #407 respectively. Several possible reasons for such “overnumbering” are discussed in Edition Size Discrepancies. There may have been only 350 Kwan Yins (as the catalog states) BUT that doesn’t mean that all of their numbers fall between #1 and #350. Clearly at least two of them do not. An unfortunate murkiness, but there it is. 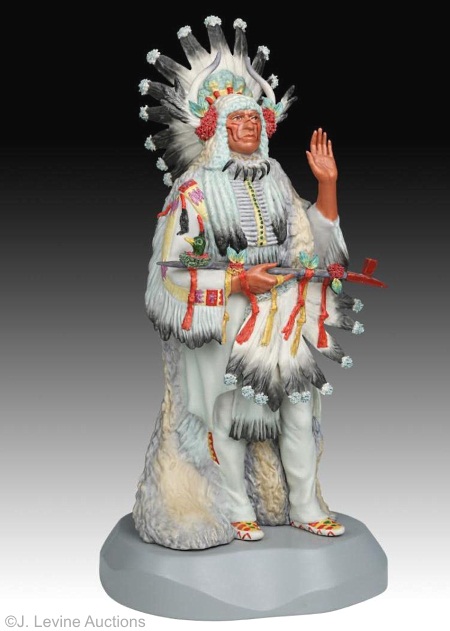 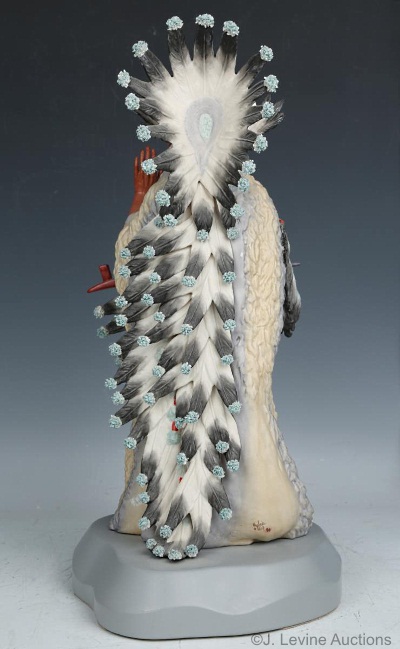 The Lakota Sioux tribe of Native Americans worshipped Wankan Tanka as the Great Spirit that created the world. This sculpture was issued in 1979 as part of the studio’s North American Indians series, to represent the Sioux. It is slightly taller than 18″ overall. The edition of 200 sold for $3500 at introduction and was completed in the mid-1980s. The more common spelling of the name of this Native American deity is Wakan Tanka, but Cybis chose to title theirs as Wankan. 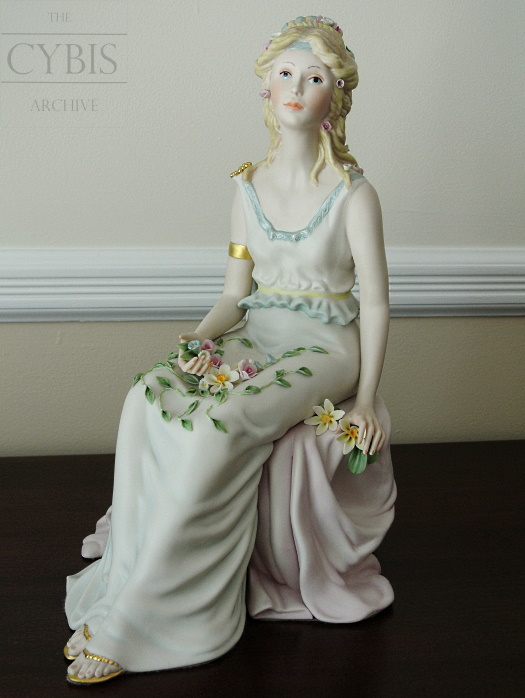 Persephone, daughter of Demeter and wife of Hades. The original version of Persephone is 14.5” tall and is a completed limited edition of 200 that was introduced in 1982 at a price of $3250. She was sculpted by William Pae and is larger in body scale than any of the other Cybis full figure portraits; if she had been sculpted standing, in the same scale, she would have been about 18” high.

During the Brielle Galleries’ spring 1982 “Cybis party” during which Persephone was introduced, guests could watch as art director George Ivers painted a white bisque version.

Cybis created two Hall of Fame versions of Persephone during the 1990s: 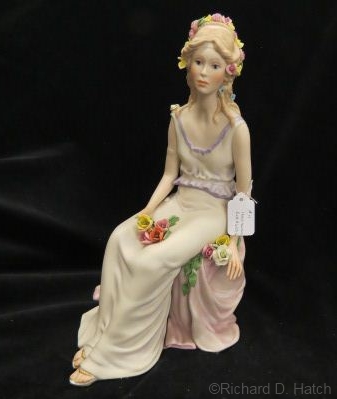 Persephone II is 12.5” tall and was an issue of 500 in autumn 1990, at which time she sold for $2500. Other than the height, there are various decoration differences in the Hall of Fame replicas versus the original 1980s piece (color of bodice trim, type and color of flowers in her hair, on her lap, and on the back of the rock.)

Aphrodite, the goddess of love in Greek mythology, designed by Lynn Klockner Brown. She is 8 ½” tall, and was a declared edition of 750 in 1983 at $875. Ten years later her price had risen by $1000 and by 1995 she was $2250. It appears that they did indeed finish the edition because the #750 piece appeared for sale on eBay in November 2017 (for $199, dramatically illustrating how far the art porcelain market hath fallen.)

In the 1980s Cybis launched a series called “Classical Impressions” that were at first made in plain white bisque to evoke the look of Parian. Among the first in the series were the two mythological characters below.

Leda and the Swan was a 1986 limited edition of 500 which had an issue price of $1450 in white bisque as shown, which was the only available version initially. By 1988 Cybis had added a separate “color” edition of only 200 priced at $2250, while increasing the white version to $1750. I have never seen a color version but would love to! Both editions were closed in the late 1990s. Although not a tall sculpture at only 9”high, the base is 13” wide. The story of Leda, Queen of Sparta, being visited by Jupiter/Zeus in the form of a swan was also the subject of a sonnet by William Butler Yeats. According to some versions of the myth, the offspring of this union was Helen of Troy.

Speaking of that legendary beauty, see my Artist Profile of William Pae for photos of his gorgeous Helen of Troy sculpture model that was, sadly, never produced by Cybis.

The dynamic study of Icarus, the mortal who dared to fly too close to the sun on his manmade wings, is an impressive 19” tall to the topmost wingtip, about 15” deep front to back, and about 18” wide overall. He was an edition of 500 priced at $1800 at introduction in 1986 which increased by almost $200 in only two years. Like Leda, he was later also offered in color and, like her, both editions were closed in the late 1990s. I have never seen a high-number example of this piece for sale and I am pretty sure that not many of either were made. Additional views of this piece are shown in the Classical Impressions post.

This study is called Dream of Venus, introduced in 1988 as an addition to the Classical Impressions series. At 20” high, this Roman counterpart of Aphrodite is one of the tallest bust/torso sculptures created by the modern studio. Unlike Leda and Icarus, she was offered from the start in two colorways: a 500-piece white bisque edition for $950, and a 200-piece color version for $1475. In 1990 Cybis changed this to a single edition size of 500 in a choice of either bisque for $1275 or color for $1975.

Cybis’ three other limited edition mythology-based studies were the hippocampus Sea King’s Steed ‘Oceania’ and Arion the Dolphin Rider (both shown in All at Sea with Cybis); Pegasus may be found flitting about amongst the Unicorns and Pegasi, and two centaurs cavort in Cybis Flights of Fantasy.

The final two Cybis “mythical” sculptures are both nonlimited editions which first appeared decades ago. 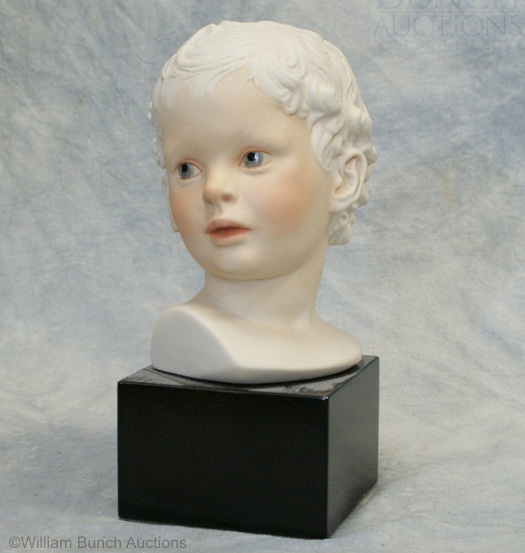 Eros (Cupid Head) on base. Although not a limited edition, it seemed churlish to not include him with his fellow gods and goddesses! He was produced as an open edition continuously since 1974 and is 10” high including the base. There can be considerable variation in the skin tone of this sculpture; I’ve seen examples ranging from barely-tinted white, to a charmingly natural blush (most common), to what can only be described as a ‘California beach-boy suntan’ version which is shown in the second photo! His original issue price was $135; on Cybis’ 1993 price list he is listed at $475.

It took quite a few more years for Psyche, Eros’ True Love to make her appearance but she finally did in 1980 as a 9” high open edition companion to Eros, on a matching wooden base for $195. Her price through the 1980s and 1990s tracked along with that of Eros, although in the very early 1990s the two were temporarily available as a pair for $900 (a $50 discount.)  The mythological Psyche was an exceptionally beautiful human girl who was rescued from certain death by Eros. After undergoing many trials and tribulations she was eventually reunited with Eros and given the drink of ambrosia by which she became a goddess, her particular purview being the soul. Their daughter Hedone, by the way, was the goddess of pleasure, enjoyment and delight…. from which we get the word “hedonist”. 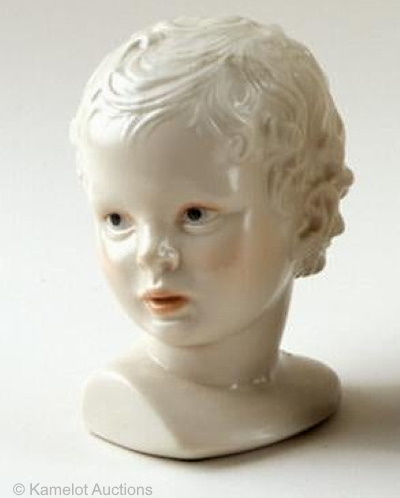 These two unusual glazed versions of Eros and Psyche were among the items offered in 2019 when the remaining stock of the Cybis studio was liquidated at auction. Both are experimental pieces that were never made for retail sale