Cybis’ various representations of madonnas (old and newer), other religious figures and popes appear in other posts, but the studio also produced several Old Testament character portraits as well. All were limited editions and are shown below in chronological order by introduction year.

The first of these was Moses ‘The Great Lawgiver’. It was an edition of 750, designed by Laszlo Ispanky, produced from 1963 to 1970 at a starting retail of $250 that ended at $350. In one of the strangest Cybis collection classification situations I’ve ever seen, this piece when first introduced was placed into their “Objects d’Art” section on the Spring 1963 price list. There was a Religious section as well, but this was not placed into it. Even more puzzling, it is NOT shown on that list as being a limited edition! However, the 1967 list does show him as an edition of 750, so perhaps it was an accidental omission on the earlier list.

After dithering over where I should include this 1981 plaque that was based directly on the 1960s sculpture and sold as the Moses, The Great Lawgiver Plaque, I’ve decided to show it here. This was one of two very elaborate framed plaques that Cybis based on earlier sculptures; the other was the Holy Child of Prague plaque. 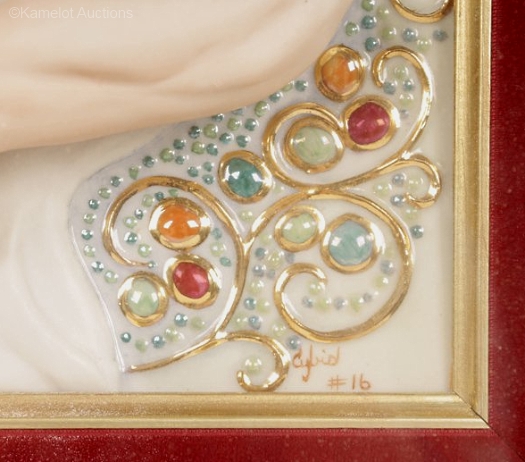 The original declared edition size in 1981 of 50 plaques was quickly reduced to only 25 the following year. Its retail price in 1982 was $4500 and it was indicated as being near closing.  By 1988 the edition was closed. The dimensions are 19 ¾” high x 23 ¾” wide overall, with the porcelain plaque itself being approximately 16” high x 12” wide. All of the jewel-like detail work on these plaques was done by George Ivers who was the art director of the studio at that time.

This watercolor and pencil drawing of the framed Cybis Moses plaque was done in late 1978/early 1980 by freelance artist Cyndy Bohonovsky at the request of the Cybis studio which then purchased it from her. The piece is approximately the same size as the actual plaque, being 17.5″ high and 14.25″ wide; it is not framed, because the rendition itself includes the (drawing of) the plaque’s frame. Because it was a commission from the studio she did not sign it.

Fast forward to June 2013 when the watercolor, along with the #16 plaque shown above, appeared as a single lot auction listing,  described as being a “drawing on canvasboard.” Because of the lack of a signature, and probably because the same sale contained several one of a kind actual 1940s Boleslaw Cybis sculptures, the auction house described it it as a “Boleslaw Cybis prototype drawing” which of course is incorrect. I have personally spoken with the artist and there is no doubt that this painting was indeed done by her. A future Archive post will showcase the other work that she did for Cybis in the late 1970s. 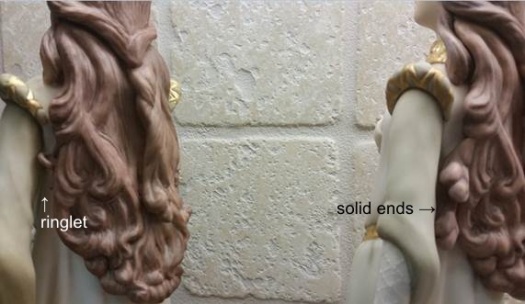 There are two slightly different versions of Queen Esther as regards her hair. Apparantly the earliest-produced ones (less than the first 50) had some some small ringlets as a detail on the side portions of the long hair that flows down her back. These may have presented a production problem because the ringlets were then eliminated and replaced by hair sections with “solid” ends. The photos above, showing one early and one later Esther, point out the differing areas. Many thanks to the collector who sent me these comparison photos, because I was totally unaware of this production alteration by Cybis!

Another possible alteration from the original design may have been her eye and hair color. The Cybis photo in their 1974 introductions brochure appears to be of an example having blue eyes and hair that is so much lighter as to be almost blonde. Was the sculpture in question a prototype or were a few production pieces actually made using these colors? 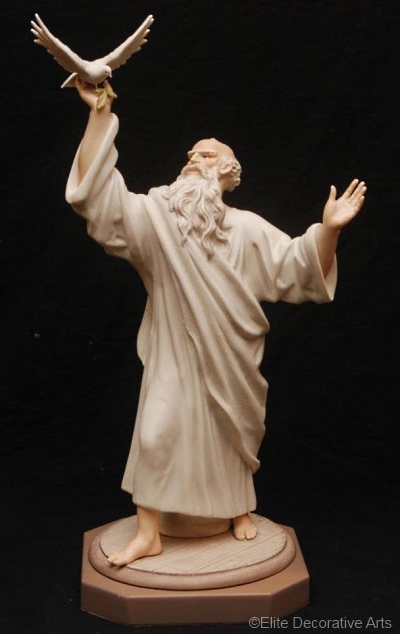 Noah, complete with olive-branch-bearing dove, was a limited edition of 500 which was only made for four years (1975-1979). His retail price went from $975 to $1125. At 21” high he is an imposing figure, and was one of several Cybis that were presented to Pope Paul II during his visit to the USA in 1979 (see Gifts of State for the full list.) He has been incorrectly identified occasionally by online sellers as being “Moses”……must be that white-beard thing! 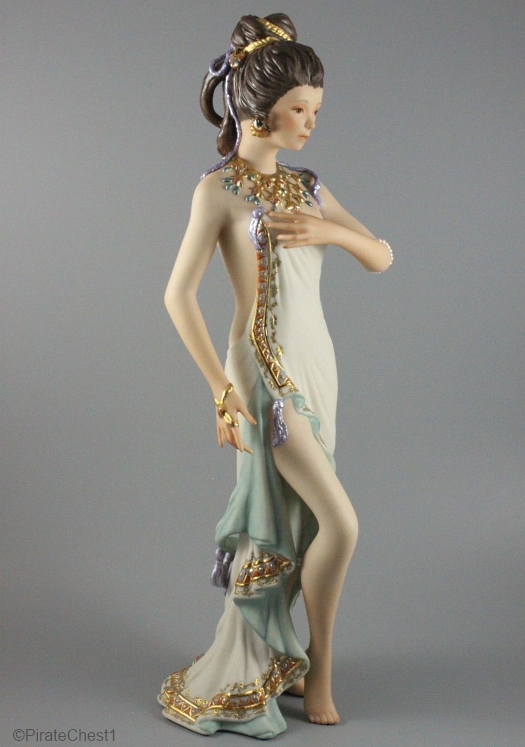 Bathsheba was an edition of 500 introduced in 1984 at $1975. She is a separate companion sculpture to King David although, oddly, quite a few examples are taller than he is. For some reason, there is a noticeable inconsistency in the height of Bathsheba from one example to the next. Even a brief comparion of pieces sold online in the past several years reveals several that differ from the 14.5” cited in Cybis literature, including three at 14.75” tall. So it seems to be purely a matter of either luck or alert planning if a collector ends up with a Bathsheba who is not taller than their accompanying King David. In 1993 her price was $3850.  It’s uncertain whether the full edition was ever completed, although examples numbered in the 300s have been seen for sale. 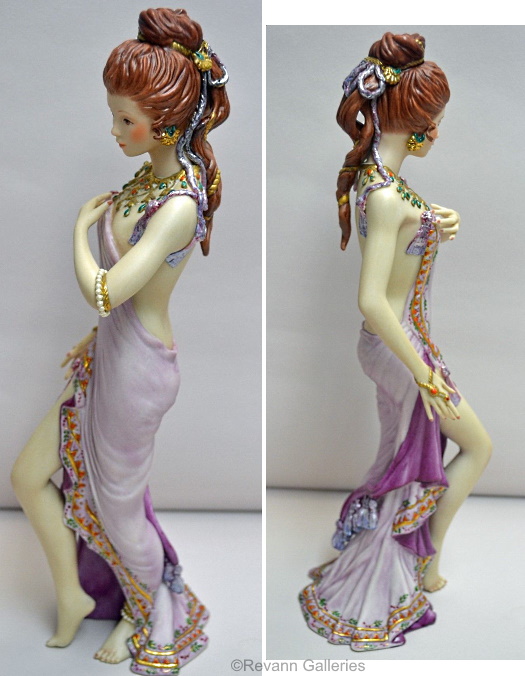 An rather garish artist-proof redhead Bathsheba in a lavender/purple colorway.

King David was also an edition of 500 introduced the following year (1985) at $1475. Although Cybis literature cites his size as 14.75″, quite a few are shorter than this, including one sold on eBay with a given height of only 13.5″! David’s edition size was reduced to 350 by 1988 at which time his price had risen to $1775. In 1993 he was $2395, and during that year Cybis offered David and Bathsheba as a pair for $5875; this discounted option disappeared shortly after. In design, Cybis has come pretty close in their depiction of David’s stringed wooden instrument of roughly triangular shape, which is thought to have been a psaltery. Various other portraits of David show him playing a harp or lyre, both of which are open instruments rather than the box type shown here. This piece was designed by Gertrude Fass, who was also noted for her career as a scriptwriter, teacher and author as well as a sculptress.

It should also be noted that in 1983 the studio introduced an open edition called David, the Shepherd Boy which some collectors interpret as being a depiction of King David in the David-and-Goliath story. The studio never gave any indication of this in their literature, however, and it was placed in their Children to Cherish category rather than Biblical.  It should also be kept in mind that most open edition sculptures were given names by the Cybis advertising department after the designs had been finalized rather than at the concept stage. So the original intended identity of this piece will remain open to conjecture. (My personal opinion is that if it was intended to represent the young King David as a child, they should at least have included a slingshot, lol)

King Solomon, introduced in the autumn of 1987 at $2695 as a limited edition of 500. In 1993 Solomon was $3150 from Cybis. He is 15” tall and was described as “companion to Queen of Sheba”. Online sellers have occasionally confused these two Cybis biblical kings (David and Solomon) with each other.

The Queen of Sheba, introduced in spring 1987, 14.25” tall, was an edition of 500.  She too was $3150 in 1993, at which time she could be had as a pair with King Solomon for $5675 (a respectable $625 discount) for a short time at least. She is chronically mis-identified by sellers as being Cleopatra. However, the only Cleopatra ever produced by Cybis was a bust which appears in the Historical Personages post.

This sculpture has an unusual format for the signature: the copyrighted Cybis phoenix logo is applied in paint instead of as a mold impression.

Thus far, I have seen three different sculptures from this edition and they all have the painted phoenix applied as shown in this example below, as well as having the copyright symbol and accompanying year in paint rather than mold impression. What I don’t know is whether the phoenix logo also appears anywhere in the mold, as it normally would. One or two other designs from 1986 and/or 1987 have also been found with the painted phoenix.