Euterpe, the Greek muse of song and music, certainly inspired the artists of Cybis at various times during the past decades (her compatriot Terpsichore is reflected in their ballet sculptures.) Their first two such studies both appeared in 1967 but reflect very different musical genres.

This evocative study of Arturo Toscanini’s hands was originally titled The Symphony of a Conductor’s Hands and appears captioned as such in the 1968 Cybis catalog. This piece was issued in commemoration of Toscanini’s 100th birthday anniversary in March 1967. The great conductor died in January 1957; Boleslaw Cybis would pass away later that same year. The sculpture name was later altered to Conductor’s Hands ‘The Maestro’.  (Most collectors simply refer to it as the Conductor’s Hands.) It was a limited edition of 250 and is 11.5” high including the wood base. Produced only in this white bisque colorway, the edition was completed in 1970 and ranged in price from $250 to $275 over than timespan.

Also issued in 1967 was the Folk Singer, a character remembered by all Baby Boomers even if we didn’t happen to have been one ourselves! He is 13” high and was a declared edition of 500 whjich was reduced to only 283 before closing in 1974. During its production run the price went from $300 to $650 which makes one wonder if there were production problems with this sculpture.

There also appear to have been two different colorways: one with blue pants and another with pants of a golden yellow.

Three non-limited edition female musicians were introduced in 1985 at $425 each. By 1993 their prices had been increased to $650. The names given below are exactly how they were titled. 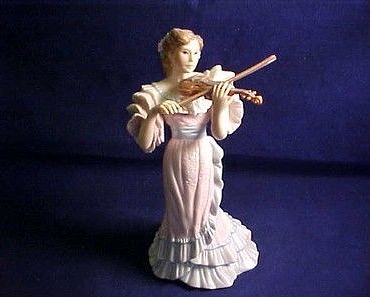 Two views of Marguerite, Mandolin who is 7” high. 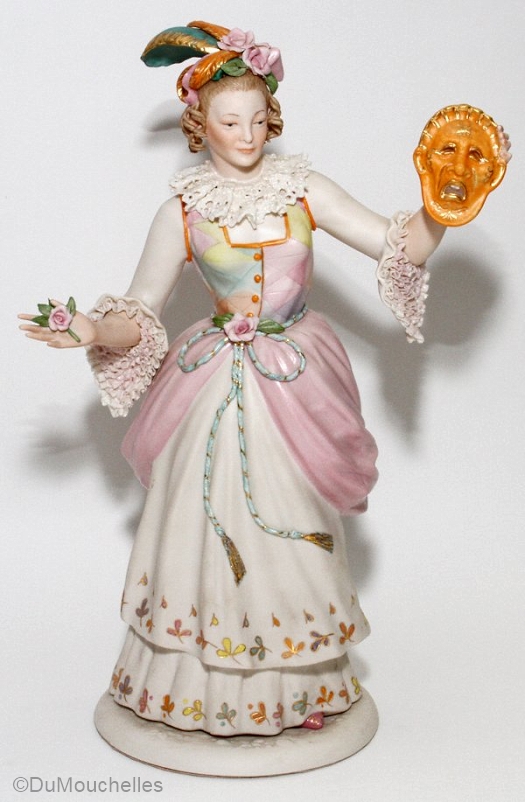 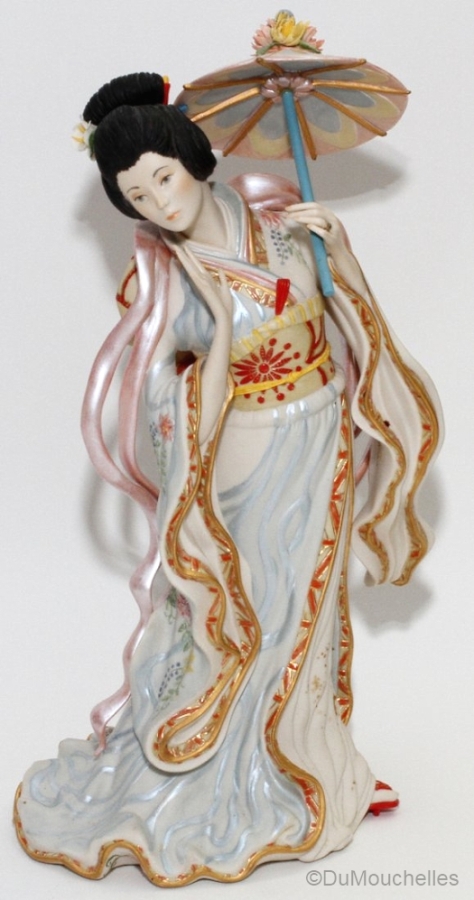 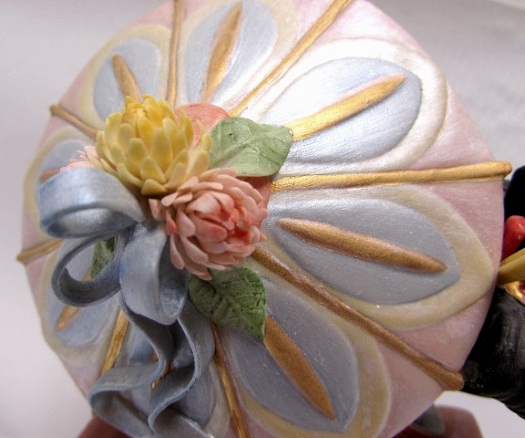 A few years later Cybis introduced Madame Butterfly in 1984 at $2875; she sold for $3495 by 1988. On their 1993 price list she has been further increased, to $4875. This is one of those sculptures whose 1990s price increases defy any logic or reason: $4975 in 1995, and then $6500 in 1999 and afterward. Yet supposedly her original declared edition size was “never reduced” from 500, despite the studio no longer being in fulltime production after 1990. (I have not yet seen any of these for sale with a sculpture number higher than the 200s.)  Madame Butterfly’s parasol has a bad reputation for coming unglued and as a result pieces are sometimes seen with it having been reattached in a different position or even missing altogether. The Cybis advertisement shows the original correct position of the parasol; she is 13.5” high with her parasol in the proper place.

Carmen appeared in 1986 as a declared edition of 500 which (like Madame Butterfly) was probably never completed. In 1988 she sold for $1975 but the edition was closed before 1993. (Note: The detail photograph is of a Carmen who is missing her decorative haircomb.) She is 14.5” high and is sometimes confused by online sellers sellers with Kitri which is a costumed ballerina sculpture from Don Quixote. Kitri can be seen in the Ballerinas post.

The final Cybis opera sculpture was Pagliacci, an open edition introduced in 1985 at $325 and designed by William Pae. Pagliacci is 10.5” high, and because of his costume he is sometimes mistakenly assumed to have been one of the Circus pieces. Although he was officially retired before 1988 (along with Harlequin and Columbine)  the studio ‘resurrected’ him in the early 2000s from unsold backstock and listed him on the website for $450.

In the mid-1980s Cybis began a series of five “musical animals consisting of a rabbit, mouse, dog, cat and bear. The entire series was designed by Steve Zuczek with the exception of the first animal. 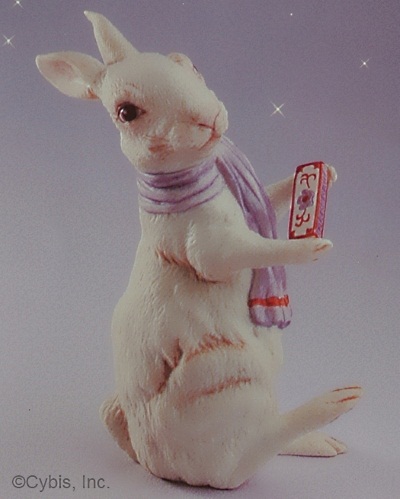 The following year (1987) saw two new band members. Here is Merve the Musical Mouse who is 4.5” high. His issue price is unknown.

Cal the Musical Cat also appeared in 1987 (at $250) and is 6.5” high. Apparantly the Cybis marketing department’s alliteration well ran dry at this point, because I certainly can think of a couple of alternative name suggestions for him. How about “Cal the Concertina Cat”? or “the Cantina Cat” (shades of Mos Eisley!!)? His description of being “the 4th member of the Cybis Musical Menagerie Quartet” indicates that only four were planned…however….

The final piece in the series was Bo Bo the Musical Bear, who is 4.75” high and appeared in the fall of 1987 at $235. Because of his neckwear he is sometimes assumed to be a Circus piece even though Cybis never assigned him that role. “Bo Bo the Baritone Bear” might have been a more interesting name for him too!

Cybis listed the “Musical Menagerie” animals in 1993 for $295 each except for Merve the mouse who was $275. At that time they also offered the complete set of five for $1275 which was a $180 discount from the individual pricing. That option was discontinued shortly afterward and the “band” continued at their individual pricepoints.

I would be remiss if I did not also mention the pieces that, in a way, were the very first musical-themed pieces by the Cybis studio: a set of angels made by Marja Cybis in papka during the 1940s. I suppose most would consider them to be part of the religious or angel genre rather than musical, but they are so unusual that they have been given their own separate post, the Angelic Orchestra. The angel musicians play a violin, mandolin, French horn, cello, and guitar and there is also a lyricist.