Having covered the Cybis fairytale characters, we still have a separate group of sculptures created during the span of a decade and based instead on traditional nursery rhymes. Some of these were included in the 1980 hardcover book Poems for Children and Other People by George Hornby which was illustrated entirely with Cybis photographs. All of the sculptures below were open (non-limited) editions.

Taking them in chronological order by introduction year, the first was Betty Blue who was introduced in 1974 at $175; in 1988 she was selling for $375 before retirement a few years later. A December 2002 episode of Everybody Loves Raymond, entitled “The Thought That Counts”, features a Betty Blue in the plot. Her dress color appeared to have been enhanced to a darker shade, no doubt to show up better on camera.

Little Betty Blue lost her holiday shoe,
What will poor Betty do?
Why, give her another to match the other
And then she shall walk in two.

(Ca. 1881, published in Kate Greenaway’s Mother Goose, or The Old Nursery Rhymes. Some early-1900s versions read “little Betty” instead of “poor Betty”, and/or say “will walk” instead of “shall walk.”) 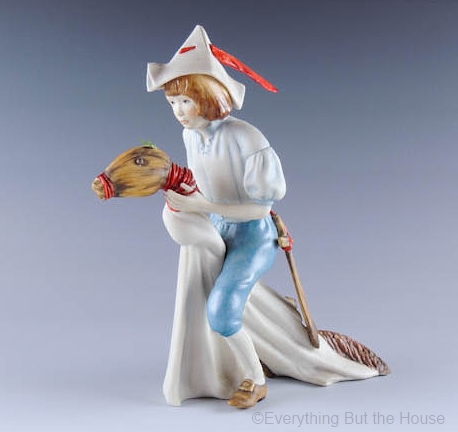 One evening Marylin and Joe Chorlton went to the historic Nassau Inn, in Princeton, for dinner. While waiting for their table Marylin was inspired by the large mural behind the bar whose central figure was Yankee Doodle Dandy. She took out her ever-present sketch pad and drew her interpretation of the figure which later, at the studio, she transformed into a child version.

The mural, by Norman Rockwell, is 13 feet wide and was created specifically for the Nassau Inn; it has hung in the Yankee Doodle Tap Room since 1937. An excellent photo of it appears on the restaurant’s website, approximately 1/3 of the way down this page.

Yankee Doodle went to town
Riding on a pony;
He stuck a feather in his hat,
And called it macaroni.

(This version was first published in the 1780s.) 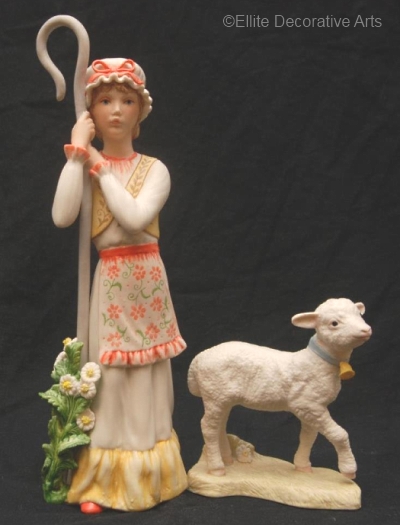 Here’s something different: A one-of-a-kind Bo Peep who holds a long red branch instead of her shepherd’s crook! Did she lose the crook as well as her sheep, I wonder? 😉

Little Bo-Peep has lost her sheep,
and doesn’t know where to find them.
Leave them alone, and they’ll come home,
wagging their tails behind them. 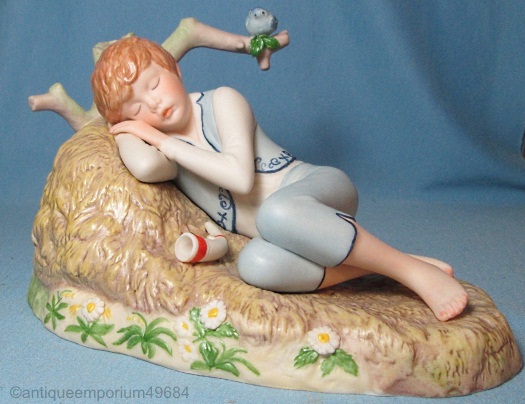 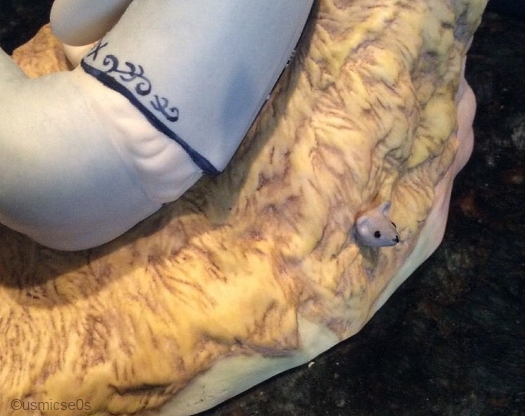 Little Boy Blue is 6” high and was issued in 1978 at $325 and retired prior to 1982. Notice the tiny little mouse peeking out from the back of the haystack!
Little Boy Blue,
Come blow your horn,
The sheep’s in the meadow,
The cow’s in the corn;
Where is that boy
Who looks after the sheep?
Under the haystack
Fast asleep. 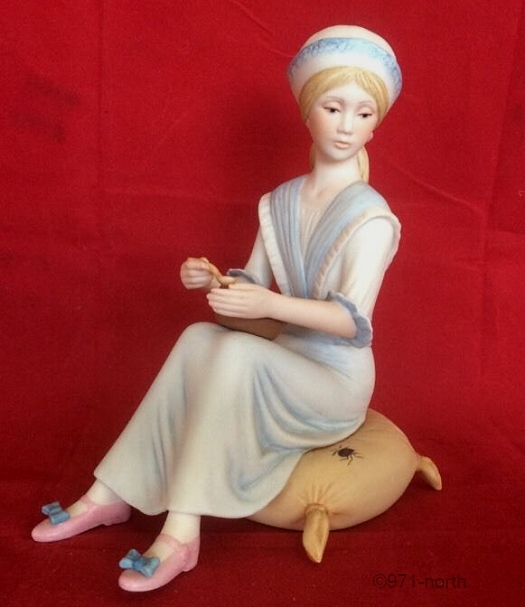 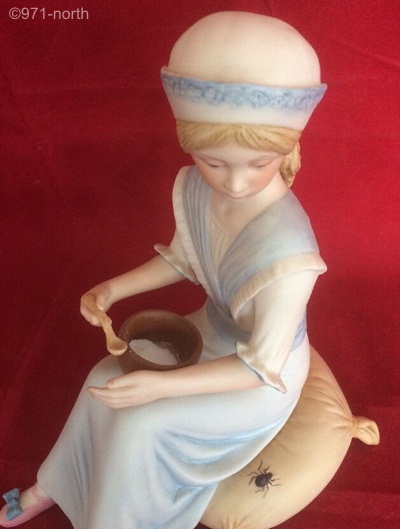 Little Miss Muffet sat on a tuffet,
Eating of curds and whey;
Along came a spider who sat down beside her
And frightened Miss Muffet away. 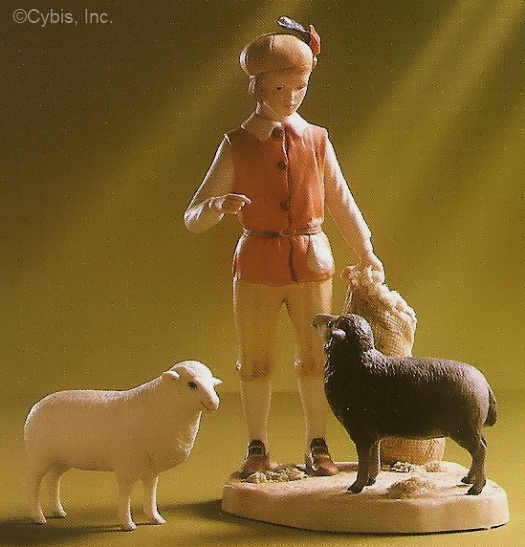 Baa Baa Black Sheep appeared in 1981 for $475 and is 10” high. The white sheep was sold as a separate companion sculpture, originally named Muffy, Fluffy White Sheep which was subsequently revised to Muffy Fluffy. After Baa Baa Black Sheep was retired, Muffy remained after being renamed and reassigned to the second Nativity series.

Baa, baa, black sheep, have you any wool?
Yes sir, yes sir, three bags full!
One for the master,
One for the dame,
And one for the little boy
Who lives down the lane
(Ca 1744) 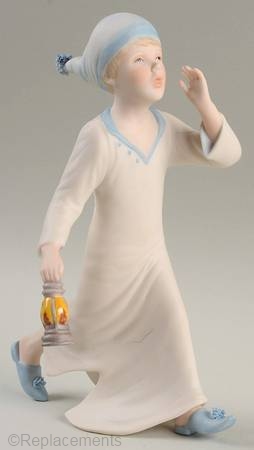 Wee Willie Winkie from 1983 is 7.5” high. I have occasionally seen him without his lantern, which was only fastened to his right hand with glue. The English version of the rhyme, published in 1844, is:

Wee Willie Winkie runs through the town,
Up stairs and down stairs in his night-gown,
Tapping at the window, crying at the lock,
Are the children in their bed, for it’s past ten o’clock?

However, the original Scottish version from 1841 goes like this:

Wee Willie Winkie rins through the toon,
Up stairs an’ doon stairs in his nicht-gown,
Tirlin’ at the window, crying at the lock,
“Are the weeuns in their bed, for it’s now ten o’clock?”

The final two pieces in the Cybis nursery rhyme category date from the mid 1980s. They are related (being characters from the same rhyme) and were introduced a year apart. Both were retired prior to 2012. 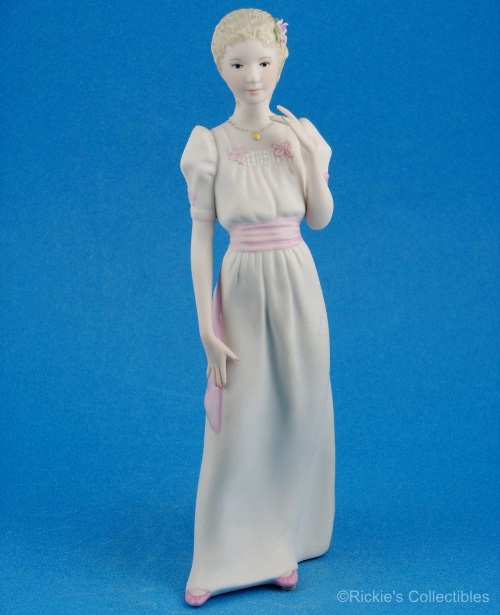 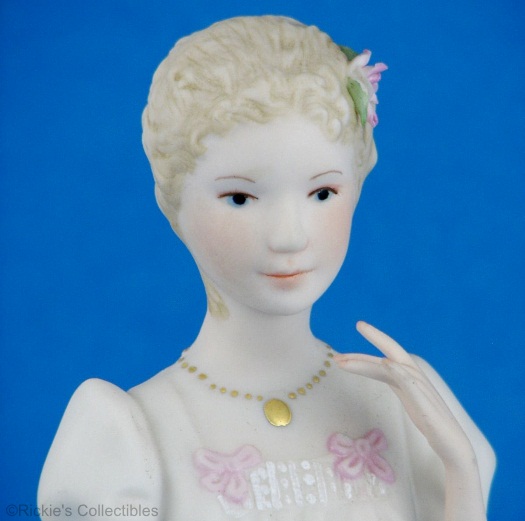 This artist’s proof/experimental Lucy is glazed and has blue trim instead of pink.

Kitty Fisher appeared in 1984 and is the same height.

The experimental glazed Kitty has brown hair and peach trim. Both were part of the studio’s 2019 liquidation.

Both figures are based on the rhyme:

Lucy Locket lost her pocket,
Kitty Fisher found it;
Not a penny was there in it,
Only ribbon round it.

In this case “pocket” means purse or bag; it is shown on Kitty Fisher’s arm and has the same color pink decoration as used on Lucy Locket’s dress. When sung, this rhyme has the same tune as Yankee Doodle and may have appeared at about the same time although it was first recorded in 1842.