Lynn Klockner Brown, Mark Twain, The Prince and the Pauper

One of many literary works that inspired Cybis porcelain designs was Mark Twain’s tale of The Prince and the Pauper. In fact, there ended up being more than one version of those two lads, spanning a full decade. Each sculpture was sold separately. Both were designed by Lynn Klockner Brown.

The first (standard) version of The Prince appeared in 1987 as an open edition for $425. He is 9″ high and was available in the colorway as shown. The copyright date in the mold is 1986; it’s not unusual for Cybis pieces to display a copyright date a year or more earlier than their retail release date. A late 1993 price list shows this version at $675 but it was retired sometime during the next two years (before Fall 1995.)

This “tweaked” version of The Prince appeared in autumn 1996 under the name of Golden Prince, and his purchase was restricted to members of the Cybis Collectors’ Society. He was designated as the members-only piece for 1996-1997; the first/previous piece (1995-96) had been the Golden Princess. (The story of the Collectors’ Society, as well as all of its associated sculptures, can be found here.) However, while the Golden Princess piece had never been offered by Cybis before, the Golden Prince was a simply a minor adaptation of the now-retired 1987 Prince. His plumed hat was replaced by a crown, which makes him about a half inch shorter at 8.5″, and the colorway was changed to all-white with gold accents, but otherwise the pieces are identical.

There is one other difference and that is that the impressed mold copyright date on the Golden Prince is 1996 even though it is the identical design that was copyrighted in 1986. This is very odd, because all of the other “revisions” of existing Cybis molds retained their original copyright date in the mold. The multitude of bunnies that were later released as separate editions with different names and accessories such as hats, bowties, etc all retained the design’s original copyright date in the mold. I have no idea why (or how) Cybis obtained a new, separate copyright for something that they’d already copyrighted a decade earlier. So that’s a bit of a puzzle. 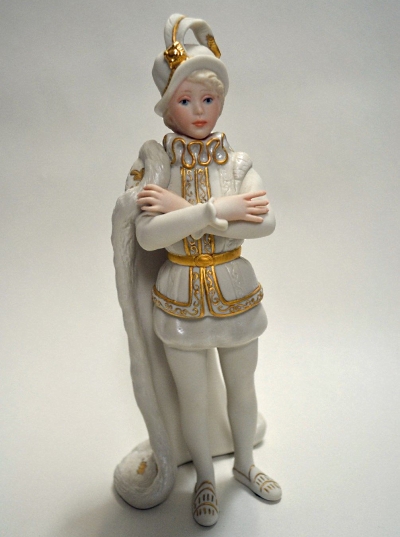 There was also a third version of The Prince that does not appear on any Cybis retail price list. Designwise he is the same as the original Prince in that he wears the plumed hat, and is also similar to the 1996 Golden Prince because he is white with gold trim… but here the gold is more in evidence, and applied differently. It’s quite possible that this was a gallery-event special issue during 1989 which was the studio’s golden anniversary year, especially because this colorway does not appear in either of the special “Golden Anniversary Collection” brochures that the studio published specifically to market such pieces. Because I don’t know his circumstances, I’m dubbing him The Prince, in white with gold decoration. That seems to cover it. 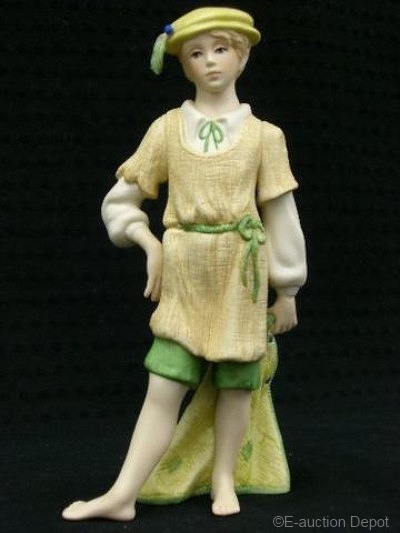 His compatriot The Pauper had two iterations but only one of them was sold at retail. This is the standard retail edition which appeared ‘alongside’ The Prince in 1987 for $295. He wears a white shirt, beige/light tan tunic, and green pants, belt, and tie. The piece in the second photo has a reddish tunic but it’s not known whether this was an accidental firing variation or whether some of the retail production run also were this color. He matches The Prince at a 9″ height. In 1993 the Pauper was $450, and on that price list Cybis also offered him together with the Prince as a pair for $995 (a $130 savings over their individual prices.) The discount on these was larger than typical for other pairs at the time, probably because the studio knew that they were planning to retire both pieces during the next two years. Cybis did away with all such pair/set discounts shortly thereafter.

Because he wasn’t a “royalty” piece, The Pauper was never part of the Collectors’ Society group but he was also made in the same white-with-gold colorway as the “mystery” (third) example of The Prince. Like the Prince, he has been seen for sale described as being a Golden Anniversary Collection piece but is not on any retail price lists and does not have the appropriate backstamp. It may well be that he was available – either as part of a pair, or singly – at the same gallery event as was the Prince in that same colorway. Lacking any official status, I have designated him as The Pauper, in white with gold decoration. 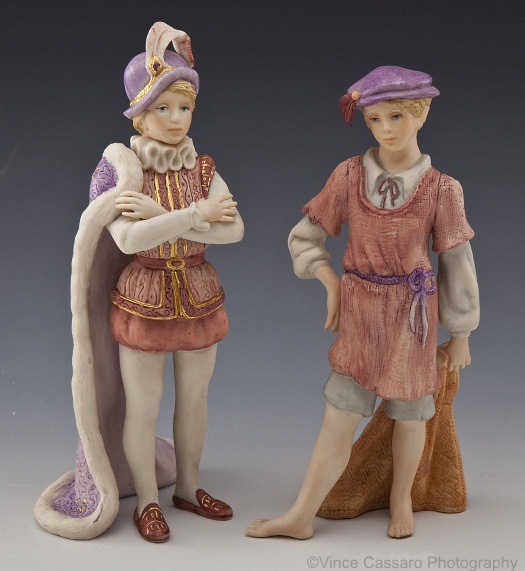 This pair are both one of a kind artist’s proofs in colors that never appeared in any of the retail versions.

Other posts showcase the Cybis figures based on literature, fairy tales, and nursery rhymes.