This sculpture is the only instance of a modern Cybis Studio porcelain that was based directly upon an original Boleslaw Cybis painting. Although the name of both works was simply The Bride, most collectors typically refer to it as ‘The Polish Bride.’ 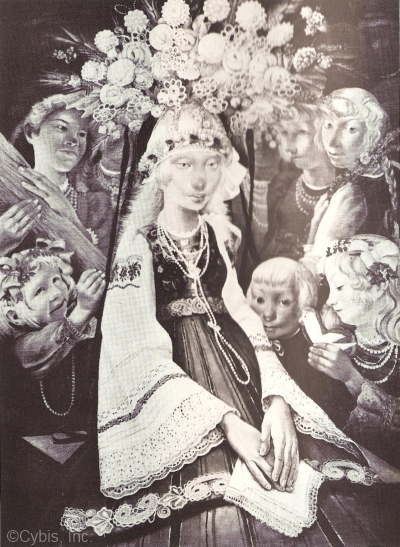 The original portrait is an oil on canvas, painted by Boleslaw Cybis in 1937, showing a peasant girl on her wedding day, surrounded by female friends and relatives, wearing a massive (one might even say explosive!) crown of flowers atop her headpiece. The painting itself is quite large, measuring 47 3/8″ high and 32 3/4″ wide. Unfortunately I cannot find any accurate color photos of it; this black-and-white one comes from the 1970-71 exhibit catalog Cybis in Retrospect. At the time of that exhibit, the painting was in the collection of the Dayton Art Institute in Ohio who loaned it and also Cybis’ ‘Peasant Heads’ to the exhibit. For the complete history of this painting, and two two somewhat-color photographs of it, see Boleslaw Cybis Paintings, Part One. 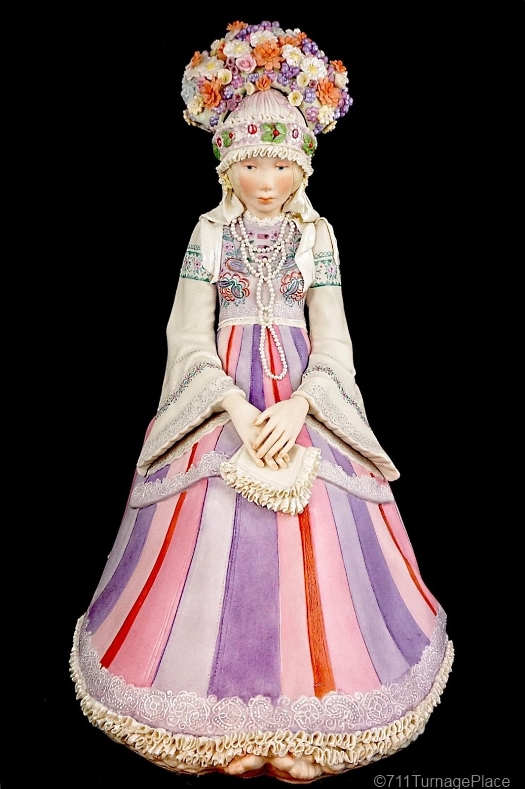 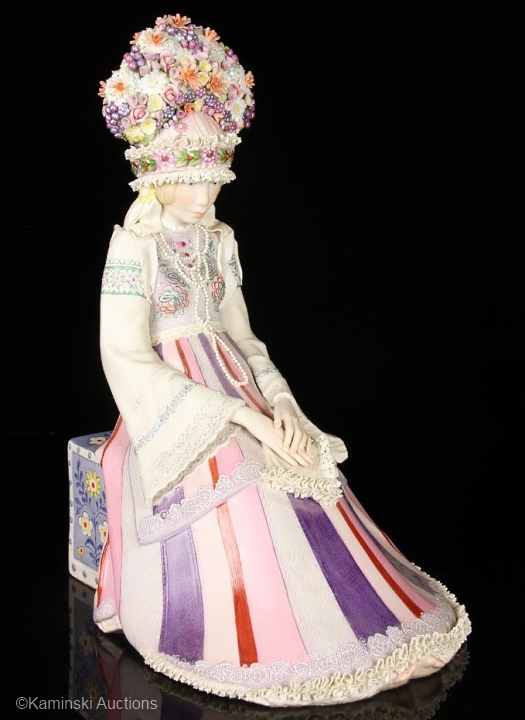 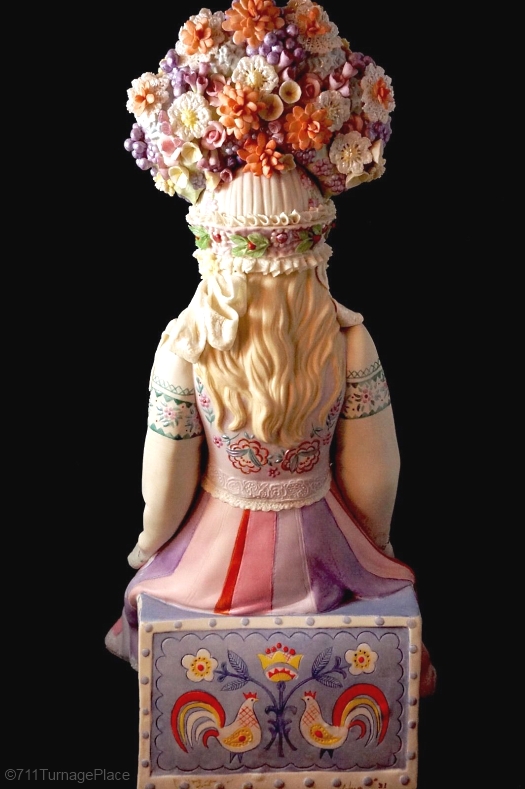 In the spring of 1980 the Cybis studio issued a limited edition porcelain sculpture also called The Bride, in an issue of 100 priced at $6500. The edition was completed in 1982 at $7250. Unfortunately some online sellers have picked up on an incorrectly-claimed issue price of $16,500 instead and it has been propagated virally as so often happens. But in fact, that actual $6500 issue price in 1980 was by far the highest retail price that Cybis had ever set. Before that, the most expensive limited edition issues had been the color owl Koo Koos Koos (edition of 50) at $3250 in 1979 and the $3500 North American Indian Great Spirit ‘Wankan Tanka’ (edition of 200) that same year. The $6500 introduction price of the Polish Bride was, although a high water mark for any single Cybis retail piece (the Commemorative Chess Set was higher but that was 32 pieces and a smaller issue to boot), nevertheless in line with their historic prices and also with the existing art porcelain retail market. Setting a retail price of $16,500 in 1980 for an issue of 100 would have been completely out of step with the times, even for the “age of conspicuous consumption”!

There is a early-2000s published price guide that does cite the original issue price correctly at $6500. I have no idea why one online seller cited it in their listing as being $10,000 more than that figure. Unfortunately that error has been picked up and promulgated by at least two subsequent online sellers of other examples of this sculpture. 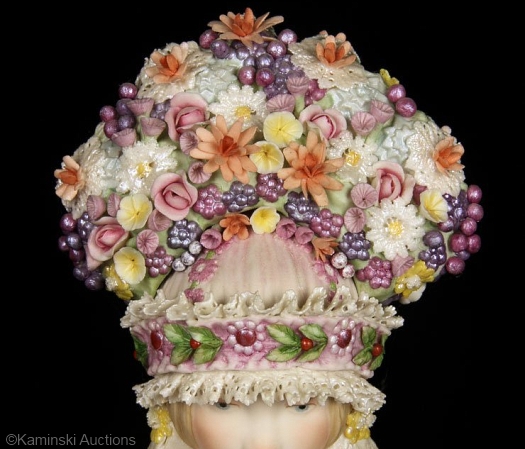 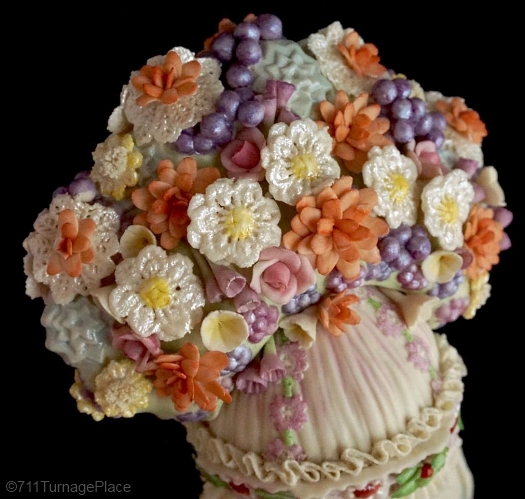 The Bride is 18″ tall, 11″ wide, and 12 1/2″ deep front to back. All of the individual flowers, leaves and berries in her headdress were shaped, applied, and painted by hand. 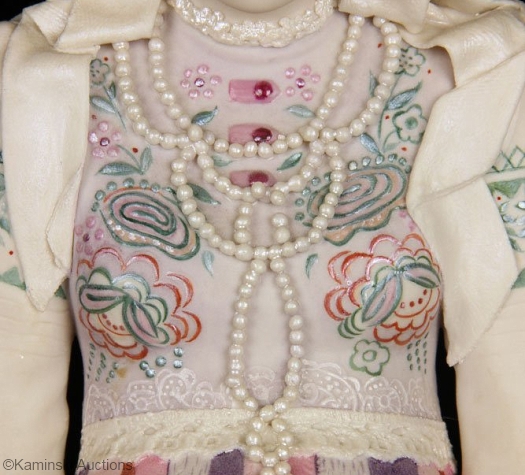 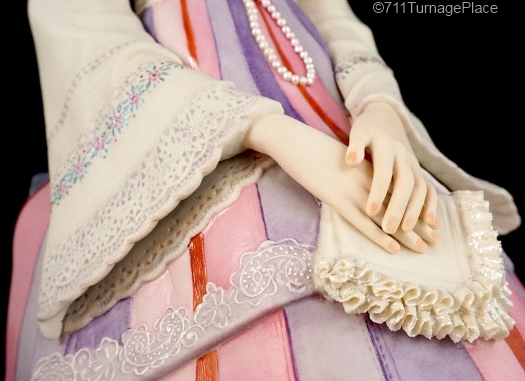 The jewel-toned decorations on her dress were painted by George Ivers, art director at the studio. (There is a ‘pearl’ missing from the applied necklace on the example shown above.) Overall the sculpture is quite a faithful rendition of the subject of the original painting, although with only a black and white photograph I have no idea whether the colors themselves differ.

An artist’s proof was given to Pope John Paul II in 1979, the year before the retail release, in recognition of his Polish ancestry (he was born Karol Józef Wojtyła.) The decoration of that piece differed from the retail edition in at least one respect: a newspaper account reported that “the Bride’s dowry chest bears the symbol of Krakow Province, the Pope’s birthplace.” Because the retail edition’s decoration does not match that symbol, it must be assumed that a portion of that artist’s proof was specially modified.

In an eerie coincidence, the retail release of The Bride occurred at almost the same time as the rediscovery of the original Boleslaw Cybis painting upon which it is based! The painting  had been in the collection of the Dayton Art Institute for decades, but in early 1980 they decided to sell consign it to an April 1980 auction in New York. The Cybis studio had no idea the original painting was to be sold until the day before the auction began…. almost immediately after they had designed and introduced the limited edition porcelain sculpture reproduction of it. 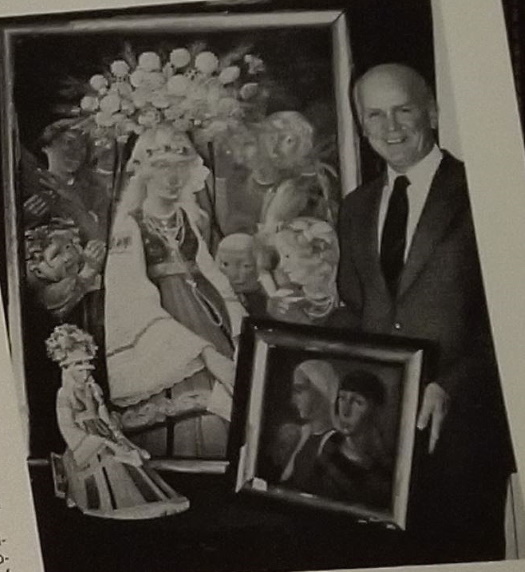 This photo shows Joe Chorlton with the original painting, the sculpture, and also the Peasant Heads oil painting which the studio also acquired at the 1980 auction sale. This gives a great idea of the massive scale of the painting!

A sculpture marked A.P. is on display at the Ellarslie Museum which is part of the Trenton City Museum at Cadwalader Park. Ellarslie is a circa-1800s mansion that has been converted into a museum; the porcelain displays are located on the 3rd floor. 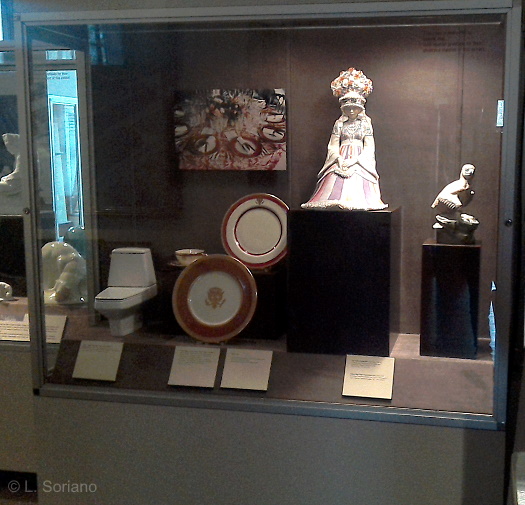 The example at Ellarslie has some very minor damage to the headdress but is otherwise in mint condition. It is on long-term loan from the Cybis collection at Mercer County Community College.

At least three other examples marked A.P. are known to exist and can be accounted for; there may be others as well.

An email conversation with an Archive reader prompted me to dig a little deeper into the cultural traditions behind the painting (and by extension, the Cybis sculpture.) In medieval Polish culture, only unmarried girls wore circlets or crowns of flowers, and so her “last chance” to do so was on her wedding day, when it would be especially elaborate. Supposedly the tradition began in the year 960 when the first king of Poland,  Mieszko I, married Princess Dobrawa who wore “the flower crown of a maiden.” (This discovery has immediate implications for the Birth at Lowicz sculpture discussed here!) The tradition of a Polish bride wearing a large floral headdress was still common in the 1930s and sometimes is followed even today.

However, I discovered two other Polish bridal traditions that the designer of the sculpture got completely wrong! The first is her shoes, or more accurately “her feet” because Polish superstition dictates that the bride’s shoes be closed, so that good luck does not escape through her toes. Although the original painting does not show her feet, the Cybis sculpture has her bare toes peeking out! Someone did not do their homework on that score.

The other bad-luck superstition is that the bride should never wear pearls, because pearls bring misery. “Pearls are for tears” is a widespread superstition connected with weddings and so I am very surprised that both the painting and the sculpture include them. The traditional Polish bridal attire does include a multiple-strand necklace but it is typically red beads — not pearls! Of course, we are assuming from the black-and-white photo of the painting that her beads are white but we don’t know for sure; the 1980 sculpture is definitely wearing pearls.  So, between her open-toed shoes and pearl necklace, the poor girl definitely was starting married life on the wrong foot! 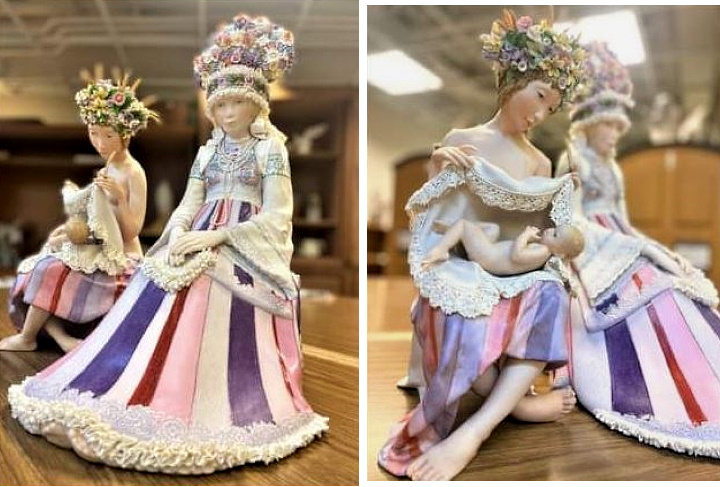 A subsequent companion(?) piece, Birth at Lowicz, was created by the studio somewhat later. Here they are displayed together at the Museum of American Porcelain Art in Ohio. The companion piece has her own Archive post.