As related in the first Cybis Locations post, the retail success of the studio during the 1960s made it imperative to find a facility with sufficient working space; this was one of the biggest challenges facing its new owner/director Marylin Chorlton. It must of course remain in Trenton, but a “readymade” ideal location proved difficult to find. The decision was made to purchase an existing building on a large enough property to accommodate whatever additional square footage was necessary. The Chorltons settled on a single-story building located at the corner of Oakland Street and Norman Avenue. 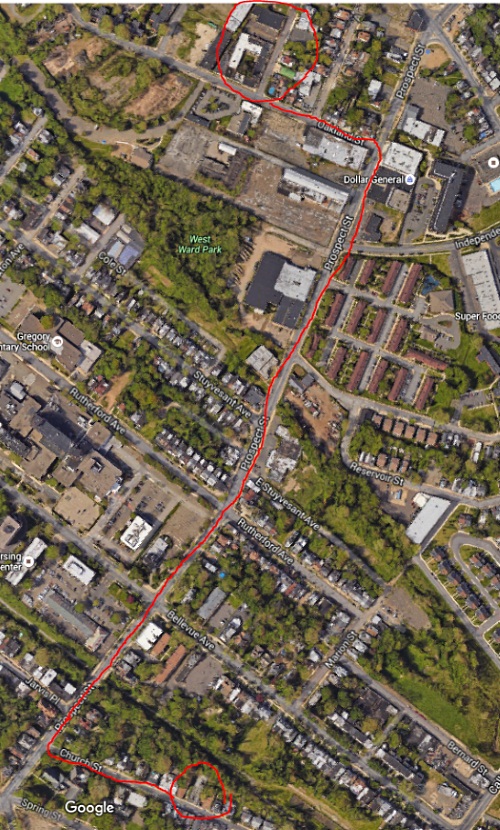 This map shows the relationship between the Church Street studio location (lower circle) and the new building (upper circle), a distance of less than one mile; it is 0.8 mile, to be precise.

The structure that they purchased in the late 1960s was far too small as it stood, but Joseph Chorlton’s brother Richard was an architect and set to work designing the necessary additions. Multiple “wings” were added so that the building formed an open square with a courtyard garden in the center. This garden area was something that was insisted upon by Marylin Chorlton so that she and the other artists could literally design directly from the living flowers and plants themselves. professional horticulturists were brought in to design and maintain an array of perennials, shrubs and trees, some of them quite rare. Ample space was created for offices, design rooms, painting areas, moldmaking equipment, kilns, storage space for the finished sculptures, and of course packing and shipping areas.

This aerial photo shows the completed structure. The original building was one of the sections at the left, probably either the one directly on the corner itself or the lighter-roof section immediately next to it. Because the original building actually fronted on Oakland, its legal address is 54-60 Oakland Street even though there is no longer an entrance door on that road. The entry was relocated to the new wing facing Norman, which is why Cybis gave its corporate address as 65 Norman Avenue. (And also why, if you enter “65 Norman Ave, Trenton” into a GPS system it may tell you that there is no such legal address.) The warehouse building to the right of the parking lot may have been added at the same time or shortly thereafter but as far as the main building goes, it is the same today as it was when first completed in the late 1960s.

The actual move from the Church Street location is said to have taken place in late 1968/early 1969. A year later a fire broke out in one of the office rooms and destroyed some of the early records from the 1930s and 1940s. This is likely what prompted Joseph Chorlton to deposit some of the paperwork from the studio’s first decade under the Chorlton ownership with the Syracuse University Library in 1970 for safekeeping. Those records are uncatalogued and not accessible to the public.

Various newspaper articles during the 1970s offer insights into the actual workings of the newly housed Cybis studio. A May 1975 article in the Asbury Park Press reported that because the original clay fields in Trenton were depleted decades ago, the Cybis studio now imported raw materials from “Florida and other southeastern states”; another newspaper article specifically mentioned getting feldspar from Tennessee. From the 1975 article:

Mrs. Chorlton has six artist designers to help her. There are some 50 persons employed at the studio which has been decorated by [Joseph] Chorlton’s brother, incorporating many original paintings of Boleslaw Cybis. It was Mrs. Chorlton’s idea to have the studio surround an inner courtyard garden. Here the artists can paint pictures of flowers and shrubs while they’re in bloom. Unusual plants can be grown for copying from life.

It’s possible that this photo was taken at the new (Norman Avenue) studio because the artists are conferring over a Little Blue Heron which was produced from 1965 until 1971. However, because of the date overlap it may also have been taken at 314 Church Street during the final years that the studio was there. Director Marylin Chorlton is shown at the far left. 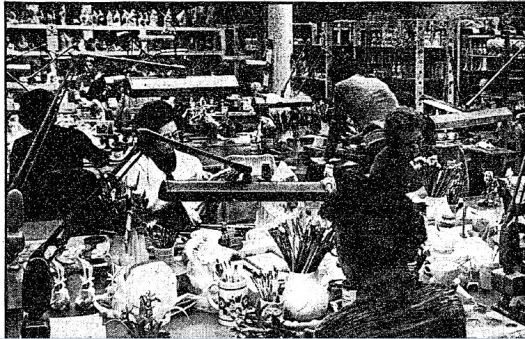 This decorating-room photo can absolutely be dated to the new studio via one of the sculptures in it. In the foreground is discernable an American Crested Iris with Bobwhite Chick which was introduced in 1972, almost four years after the studio had relocated. 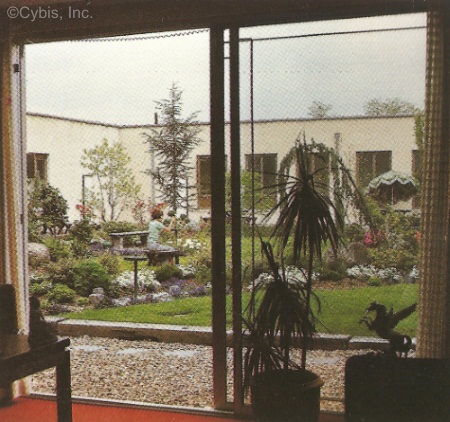 This view into the courtyard garden appears in the 1979 Cybis catalog.

In August 1979 the Asbury Park Press conducted an interview with Ida Julian who was acting as one of the directors of the studio following Marilyn Chorlton’s death two years earlier. The reporter described the studio itself as being “spacious but not overwhelming, well-lighted and functional” and that there was “an air of informality and camraderie in the studio, with radios playing softly and artisans chatting as they work.” This atmosphere has been confirmed by my conversations with several people who worked there at the time. And the advantages of the new location versus the old Church Street building were clear:

Creativity goes on in the Cybis studio, quietly and efficiently, five days a week from 7:30 a.m. to 3:30 p.m. Ms. Julian said the day starts and ends early because that’s the way the studio was run in the beginning by its Polish-born founder, Boleslaw Cybis. Cybis and his artists worked…..where nearby hot kilns made it a firehouse making it a necessity to fire in the morning, the coolest part of their workday. “That first studio was so small that if one of the artists had to go to the bathroom, the rest of them had to stand up to make way,” Ms. Julian said.

Everyone’s job was important to the functioning of the studio; for example,

Several women check each figure before packing and those that don’t pass their scrutiny are discarded. A man and a woman pack all the sculptures. Boxes are stacked in a cooled room, ready for shipment. At times, particularly during the holidays, Ms. Julian said the pace gets very hectic in the shop. “We say we ‘pack them warm,’ at Christmas time,” she said with a chuckle.

Despite the expanded office space and the interaction of directors Marylin and Joseph Chorlton with the media, there was very little contact between studio employees and the general public. Sales and marketing staff dealt with retailers on the “paperwork” end, and worked with them to set up special events at those galleries twice a year – in spring and fall, to coordinate with the semiannual introduction of new retail pieces. Their largest retailer was Brielle Galleries, located in a Jersey shore community approximately 45 miles from the studio. Cybis pieces destined for Brielle were not shipped; they traveled door to door in a van. During the 1970s, Helen Karen Wood was the liason between the Cybis studio and many of Brielle’s serious Cybis collectors. Brielle also did the lion’s share of advertising for Cybis because of the gallery’s extensive customer base. Collectors received the semiannual new-introductions booklets and brochures from Brielle, not from Cybis directly. Brielle also had monthly ad space in high end magazines such as Architectural Digest and Connoisseur.

In the mid-1970s Frank Redden, one of the marketing directors at Cybis, approached Brielle owner Ira Jacobson with an offer: Brielle would launch a national advertising campaign for Cybis, at Brielle’s expense, and in return Cybis would provide the gallery with enough free sculptures to offset the cost of the ads. In addition, because Cybis had a very strict allotment policy among their retailers for the limited edition pieces, Brielle would have their allotment size increased. This unusual arrangement worked spectacularly well for both parties for the next fifteen years, until the art porcelain market declined (which is a subject for another day.)

The Chorltons were very active in community affairs and the studio regularly contributed sculptures for charity events and auctions. The first such event I ever attended was a fundraising dinner to benefit the Mercer Community College Arts Foundation, to which the studio had contributed about two dozen limited edition pieces designated as artist’s proofs for auction. Having a limited budget and being a relatively new collector, it was very difficult to decide which piece to bid on! Our choice was Beatrice, a limited edition that had been recently been completed at a retail price of $275. The final hammer price ended up being $900 …..a testament to the wisdom of scheduling an auction at the end of a dinner that includes an open bar.

By the end of the 1980s significant changes had occurred in both the retail porcelain market and internally at Cybis. In late December 1989 the studio laid off all its employees for an indefinite period. Two years later they began selling directly to the public for the first time in more than 30 years.  This ad appeared in the November 27, 1991 issue of the local Princeton newspaper Town Topics: 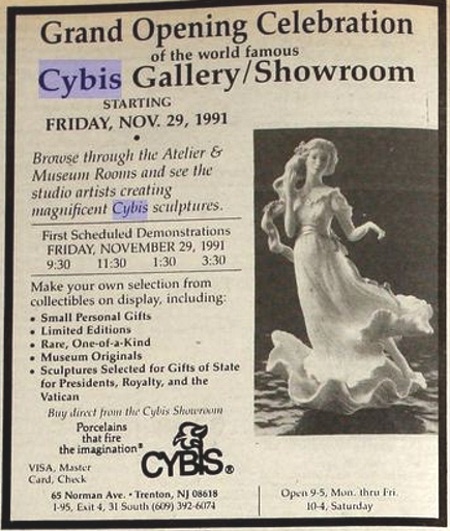 Before this, visitors to the studio had been admitted by appointment only. Even after 1991 visitors were restricted to the four rooms in which finished sculptures were displayed; I can attest to that because we visited and purchased pieces there on several weekends during 1992 and 1993. 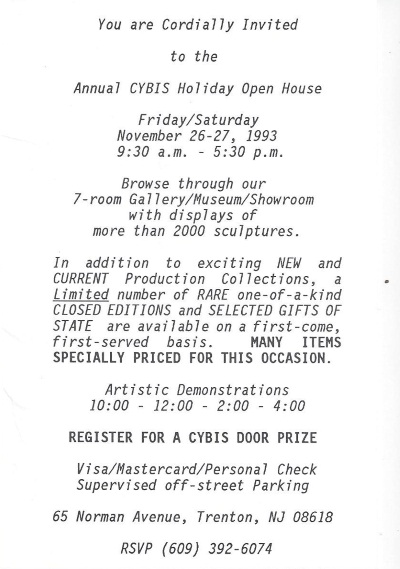 The studio also held a two-day “Holiday Open House” on Black Friday weekend, at least during the early 1990s. The invitation card shown above has a photo of the 1980 Holiday Child on the cover. 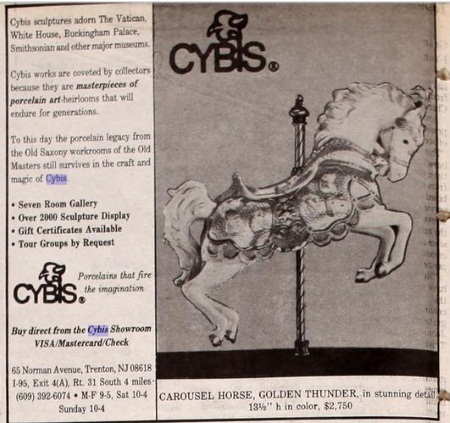 This December 1993 ad in Town Topics touted a “seven room” gallery and more than 2000 sculptures on display. This is very puzzling because we visited there via appointment on December 29, 1993 and there were only four display rooms and nowhere near the number of pieces claimed in the ad. Perhaps the 2000 was a typo for 200? Our visit date is taken directly from the receipt from the Sharmaine that we purchased from them that day. 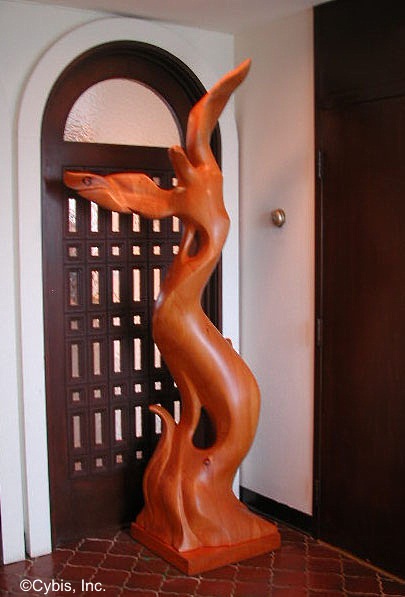 Photography was not allowed inside the studio; this photo of a wood sculpture appears on their website uncaptioned, although one would assume that it is one of Boleslaw Cybis’ 1940s or 1940s creations. I also recall that there was a selection of plaques, including the 1970s Limnettes by George Ivers, on the wall adjacent to the entrance door. That first gallery room is lined with glass fronted cabinetry but the sculptures on display in one of the interior display rooms were displayed on open tables, furniture and stands. A specially lighted area at one end of a room showcased the Knight in Shining Armor, illustrated at the end of Cybis Horses.

Update, January 2020: Please see this post if you wish to learn about the final disposition of the Cybis studio.