The very unusual pair of Cybis lady-handle mugs discovered last year were by no means the only ones that were made, after all. While the previous pair were signed M.B. Cybis, this second pair is signed simply Cybis in the same blue paint. Many thanks to the Archive reader who contacted me with photos of these  ‘new’ mugs and information about their provenance!

The mugs shown below were purchased by the noted antiques dealer Samuel Laidacker who, it turns out, was a close personal friend of Boleslaw and Marja Cybis. Collectors of antique china and glassware will no doubt be familiar with Mr. Laidacker’s Anglo-American China Parts I and II, as well as numerous volumes of The American Antiques Collector. The museum at Winterthur has an extensive collection of papers by and about him, and an excellent summary can be found on their webpage.

Although Mr. Laidacker purchased the mugs from Boleslaw Cybis in 1955 and 1956, that does not necessarily indicate that they were made during that decade; they could have been created in the late 1940s and simply not sold until later. When Sam Laidacker died in 1994 many items of his personal collection passed to his son John (known as Jack); the current owner of these mugs knew Sam personally and purchased them from Jack as a remembrance of his friend. Jack Laidacker himself passed away in 2002.

According to Sam Laidacker these mugs were prototype or “idea” pieces that were not intended for retail production, which at least partly explains why they are not mentioned in any Cybis studio literature. That in itself is not surprising, because the Cybis catalogs never did attempt to be comprehensive; the closest thing to that (prior to this website) was the 1970/71 museum exhibit Cybis in Retrospect which itself had to borrow a number of 1940s items from Winterthur’s holdings (see 1940s Historical Reproductions.)

These mugs, like the ones in my previous post, were cast from a Nassau China Company mold. The only difference is that the brand name impression on these mugs is much fainter, probably because the others were earlier castings from the mold.

For comparison, here is the underside of a typical circa 1940s-50s Nassau China Company mug.

This is the blank Nassau China mold that the Cybis mugs were fashioned on. It is slightly shorter than the Cybis mugs because Cybis added a new top section.

Lacking any other name, I’ve decided to call these the Teal Blue Foliage Lady Mug and the Autumn Foliage Lady Mug. The Cybis mugs are approximately 7″ high from rim to base.

While both of these mugs differ from the other pair in the amount and type of decoration on the mug body, this one also sports significantly more leaves on that portion as well. 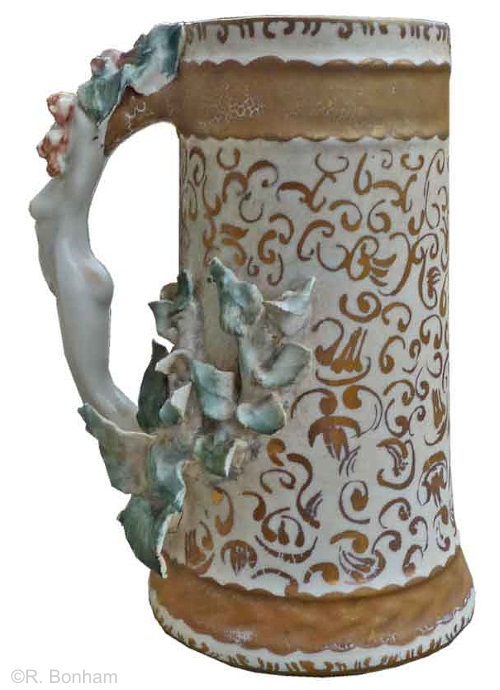 This lady also happens to be a redhead, whereas the other two were definitely blondes!

The overall pattern is of a different type as well; here there are smaller elements spaced evenly over the entire mug, whereas the other pair have larger elements and more negative (plain white) space. Another difference is that here the upper and lower ‘bands’ are solid gilt paint rather than decorated gold on white. 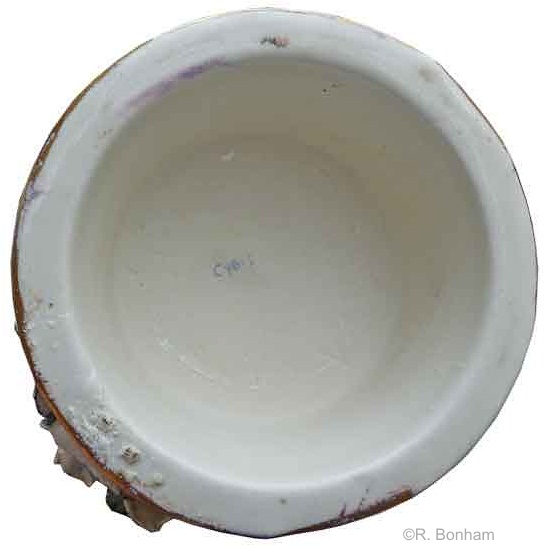 The circular Nassau China mold impression is barely discernible but is there.

Here we have another redhead, although not as intensely colored; her locks are of a subtler hue, no doubt so as to not compete unduly with the surrounding fall foliage. 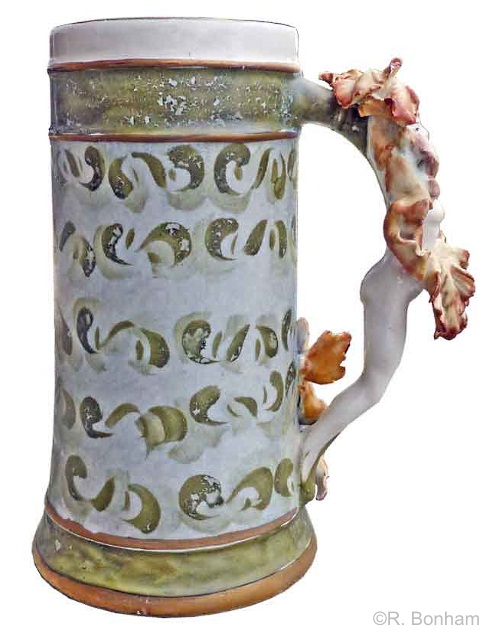 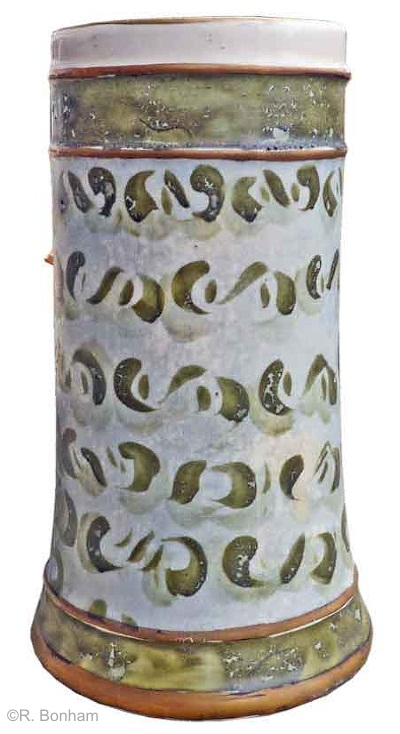 Notice the much more restrained use of gold paint on this version. It has been limited to upper and lower accent bands only.

I’ve been advised by the owner of the mugs that although it may appear in the photos that some of the green is scaling or flaking off in spots, those areas are in fact beneath the top glaze. The imperfections occurred during the firing process itself.

The Nassau impression is somewhat easier to see on this mug.

Although these mugs were clearly intended as a pair, or at least as companion pieces because of the similarity of the decoration pattern, Mr. Laidacker did not purchase them at the same time; one was purchased in 1955 for $12 and the other in 1956 for $11. (In today’s dollars that would be somewhere in the neighborhood of $100 each.)

It is tantalizing to wonder if there were any more of these prototype mug pairs made by the Cybis studio and if so, what type of decoration was used. Based on the purchase history of these, my revised dating guess is that they were all made during the late 1940s or early 1950s, rather than in the early to mid 1940s when Cybis was still doing a fair number of his pieces in the more rustic looking papka formulation.

If anyone has any additional examples of these Cybis lady mugs and would like to contribute photos to the Archive, there is a contact form link below. Again, many many thanks to the reader who so kindly shared photos and background about these very interesting prototypes!

2 thoughts on “Another Pair of Ornate Cybis Female-Handle Mugs”