Lynn Klockner Brown was one of the most prolific and longest-resident artists at the Cybis studio, creating more than 60 of their sculptures, 43 of which were limited editions. She designed in all of their genres but had a special affinity for the equine sculptures as well as the Portraits in Porcelain.

Born in Lawrenceville, NJ, Lynn Klockner was an artist from an early age and especially loved drawing and painting the animals that were part of her country childhood. She studied with Sigmund Kozlow and John Charry and, during the late 1950s, with Rosa Somerville Hope in Cape Town, SA. After her return to the USA she worked at the Holland Mold Company in Trenton, which was owned by former Cybis employee Frank Hollendonner. Here she met Patricia Eakins who was also employed there at the time (Ms. Eakins’ work for Cybis will be the subject of a separate post) and who served as a friend and mentor.

In late 1963 the Cybis studio was engaged in the production of the one of a kind Flower Bouquet of the United States to be exhibited in the 1964 Worlds Fair in New York, and was looking for additional artists to create the intricate handmade flowers and foliage. Lynn decided to interview for the job and was taken on a two-week trial basis by Marilyn Chorlton. At that time the studio was still in its ‘undersized’ first location on Church Street, and the only place for Lynn to work was in a space shared with their intimidating head sculptor Laszlo Ispanky. Ispanky was known for his mercurial temperament, to say the least, and the young sculptress wondered what in the world she had got herself into! But she proved more than up to the challenge, and Marilyn Chorlton was impressed enough with her skills to offer her a permanent position.

As was the custom at Cybis, Lynn spent part of her first year at the studio learning all aspects of their production process, from moldmaking to casting to firing, as well as sculpting, finishing and painting. At one point the studio staff was discussing the idea of a limited edition thoroughbred horse sculpture. Lynn mentioned that she had created a model of a thoroughbred for the horse’s owner on a private-commission basis, but the customer cancelled the order after having given her a $100 deposit; the model was by then more than half finished. 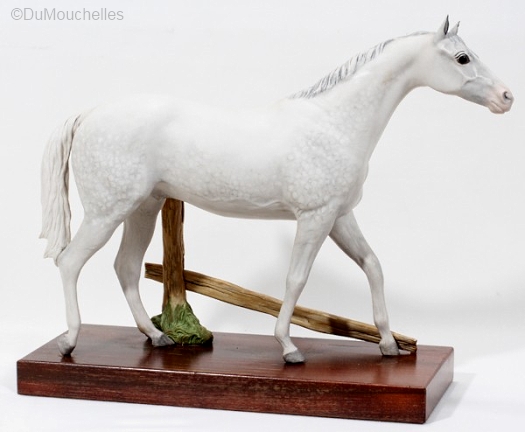 Lynn chose to complete the model anyway, so she asked Marilyn Chorlton if she would like to see it. It proved to be exactly what was wanted, and Lynn was paid by the studio for the design; out of a sense of fairness she returned the original customer’s $100 deposit to her. The Thoroughbred was an issue of 350 that was produced from 1966 to 1972.

Lynn was employed by the Cybis studio until the end of 1989, at which time the studio dismissed all of their permanent in-house staff and temporarily closed. However, she was asked to assist in 1994 with the production of a set of the Twelve Days of Christmas ornaments commissioned as a gift to President Bill Clinton in keeping with the White House Christmas theme that year.

Porcelain sculpture is by no means Mrs. Brown’s only talent. She also has had a successful career as a painter, working in both oils and pastels, especially on wildlife and equestrian subjects. An avid horsewoman, both she and her husband Francis (“Brownie”) Brown were licensed thoroughbred horse trainers active on the NJ/PA circuit for almost 30 years and many of her paintings reflect the racing, show, and hunting life. A representative selection of her work is shown below. Please note that although some of the photos are in black and white, all of the original paintings were done in full color.

Foxes are a favorite subject, and in fact Mrs. Brown once fostered a group of seven orphan cubs before rehabilitating them into the wild. The first three paintings shown below were featured on the cover of The Chronicle of the Horse, one of the longest-running equestrian publications (since 1937.)

As shown in this photo, during the 1980s their issues were produced only in two-color and greyscale printing, and so her full color original paintings appeared on their covers exactly as they do here.

These were all painted at or near the artist’s home in rural Pennsylvania. All are oil paintings.

Several of Lynn’s paintings portray her two grandchildren, Ashley Michelle and Donovan Joshua. Tragically, both children perished in September 1993 in an early morning house fire. In a 1997 article for the Equine Art Guild, entitled “A Very Special Angel”, she describes how her grief over their deaths prompted her to begin a series of portraits of them. The portrait below was also produced as a blank greeting card with a portion of the sales proceeds going to benefit fire safety awareness.

All of the paintings shown above have been sold, but Lynn Klockner Brown is still actively painting on a private-commission basis. If you are interested in commissioning a painting, either from life or from photographs, please use the direct-contact form on the About the Cybis Archive page and I will provide you with her contact information. Due to the prevalence of ‘spambots’ Mrs. Brown understandably prefers not to have her phone number and home address directly displayed on a webpage.

Limited editions are indicated by an asterisk. The  + symbol denotes that the piece is confirmed to have been chosen and presented as a Presidential Gift of State to a foreign leader or nation. Each of these sculptures is pictured on this site; use the alphabetical Index page to access the post in which that piece appears.

Lynn also put the finishing design touches on Berengaria and did the slight modifications/tweaks of Arion the Dolphin Rider which was cast from an old bronze by Jennewein. Four pieces designed but never put into retail production include a bird study (Baby Cedar Waxwing) and three flower pieces (Foxgloves, Gladiolas, and Morning Glory.) The original artist proof of the Morning Glory can be seen at the end of the Flowers post.

When I first contacted Mrs. Brown in preparation for this post and asked for a list of the sculptures she had created while at Cybis, I was amazed to see that almost every one of my all-time favorite pieces had been created by her: I had been a “Lynn Klockner Brown collector” without even realizing it! Perhaps other Cybis collectors may now discover that they have been one as well.  🙂

Lynn Klockner Brown with three of her artist’s proof Cybis sculptures that were sold in 2016 at auction.