By far the most elusive items for this Cybis researcher were not made of porcelain, papka, or paint-and-canvas, but rather of celluloid: Three short 16mm films that were created during the 1970s and early 1980s. This is the story of the films and of my search for them.

Of Queens and Kings and Other Things (1972; length 8 minutes)

The first Cybis film was also the shortest, with a runtime of only eight minutes, and focused exclusively on the Chess Set that the studio produced as a gift of state from the USA to Russia during the historic Moscow Summit in May 1972.  In September of that year, as part of an article in the Lebanon [Pennsylvania] Daily News, it was mentioned that

Because of American interest in the Presidential Set, a Princeton firm recorded the porcelain figures on color film for exhibit on TV and home screens in the United States.

The Hagerstown Morning Herald said this in a January 19, 1973 article about the circulating exhibit of an artists’ proof of the Chess Set:

The film continued to accompany the circulating exhibit of the Chess Set for the next few years. In late April 1976 a retailer called The Pillars in Monroe, Louisiana, placed an ad in the News-Star for a Cybis event featuring the film:

Special showing of the award-winning film “Of Queens and Kings and Cybis Things.” The star of the film is the official gift of the U.S.A. to the U.S.S.R. It runs for eight minutes of magic, fantasy and music, and CINE 72 honored it with their coveted Golden Eagle Award, which The Council on International Nontheat­rical Events “selected for excellence” to represent the United States of America in international motion picture events abroad. Its mood will place you in the Cloisters of the Metropolitan Museum of Art.

Notice the discrepancy in the film title in the ad: “Cybis Things” rather than “Other Things.” I believe this error can be traced to the title of an article that appeared in Trenton Magazine some months previously; there they used “Cybis Things” instead of the film’s actual title.

According to the entry in the Library of Congress catalog of motion pictures and filmstrips, the film was produced by a company named Probe Associates. Unfortunately the entry does not include an address for the firm, but in any case they are no longer in existence.

The second film, titled Porcelain Enchantments, was produced the following year by the same company that filmed the chess set but was noticeably longer. The title corresponds to the studio’s trademarked tag-line during that decade. Part of an ad from Armstrong’s (Cybis’ biggest West Coast retailer) in the Los Angeles Times on November 16, 1973 mentions that:

The Cybis Studio has just finished producing a remarkable film entitled “Porcelain Enchantments”‘. We at Armstrong’s are quite proud to have been selected to present the premiere showing of this great new film. We will also be showing another film that was produced last year entitled “Of Kings and Queens and Cybis Things”.

Notice the film-title errors here as well.  The fact that Armstrong’s was the first dealer to show it publicly means that it was probably filmed in the late summer of 1973. I asked two artists who worked at Cybis all through the 1970s and neither of them remember ever seeing a film crew at the studio, so it was most likely filmed on a weekend in order to avoid disrupting a normal workday.

The Fall 1974 issue of The Phoenix, Cybis’ illustrated retail booklet, says this about the film:

The Carousel sequence in our new Cybis film, “Porcelain Enchantments”, is such a rapturous rhythm of rainbow colors and sound. In an artistic fashion, the film traces the sculpting and firing cycles of porcelain…a promised treat for all porcelain aficionados.

“Porcelain Enchantments” was filmed here at the Cybis Studio with the same aesthetic direction that produced “Of Queens and Kings and Other Things”, the CINE Golden Eagle award wining film about the Cybis Presidential Chess Set. Copies of both films are available for limited engagements to interested groups.

At the same time, the studio was running the film as a paid advertisement on some local television stations: 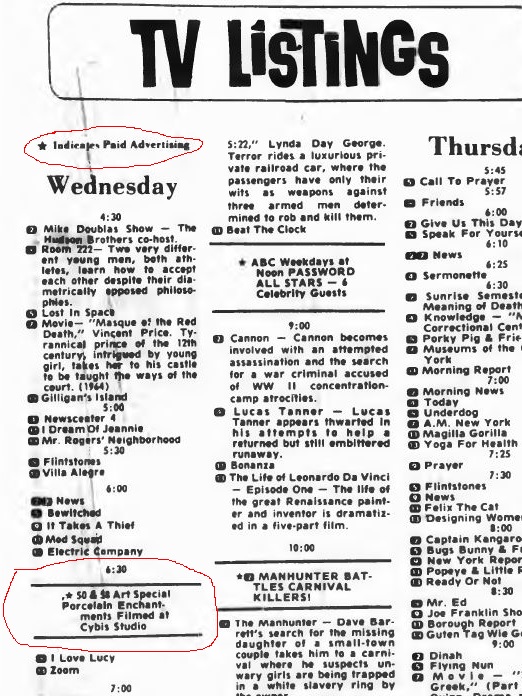 I found this snippet that ran in the November 20, 1974 issue of a Nyack, NY, newspaper’s tv listings. It aired a few days earlier (Nov. 17th) on channels 23, 50, 52 and 58 in the Philadelphia and Morristown, PA, area.  Broadcasting extended into the public-television (PBS) realm the following year, airing on WPBT2 in Fort Lauderdale, FL, in May 1975 and also in December on WNJS serving the Camden NJ/Wilmington DE region.

Update, November 2020: Exciting news! I can now report that a collector friend of mine has obtained a digital copy of Porcelain Enchantments, and has posted it on his YouTube channel. However, there are a few things to note before viewing.

Sadly, the 16mm film that was used in 1973 has suffered the fate of many Kodak Eastmancolor projects: The film dyes were unstable and have degraded over time into various shades of red. Professional restorers, if they know in advance that the film has degraded, can adjust their digital scanning equipment to take out some or most of the red so that the color cast is not as bad. It was not a known option in this case.

Here are two screen-grabs from the film as it exists today, showing the Crocus and part of a Chess Set sequence. 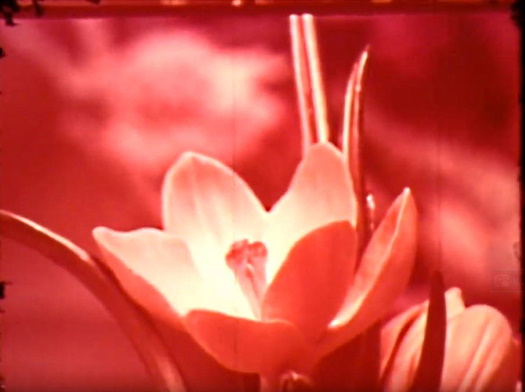 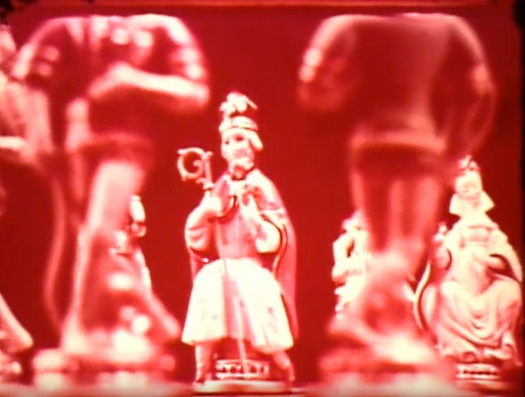 The red cast is extremely distracting. But look what happens when I convert a screen shot showing the Eskimo Mother into a black-and-white image: 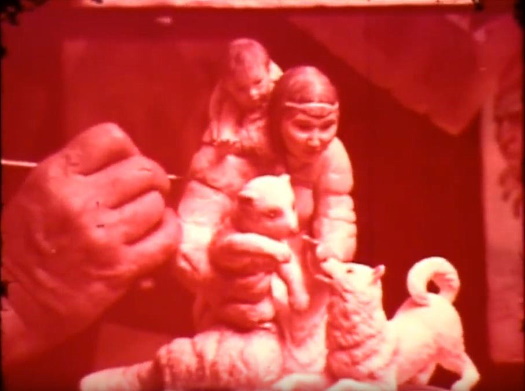 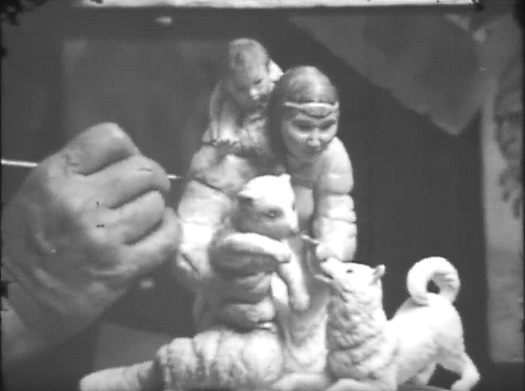 Although it lacks its original colors, at least it is not screaming “RED!!!” at full volume directly into one’s brain. Many of the details are clearer also. 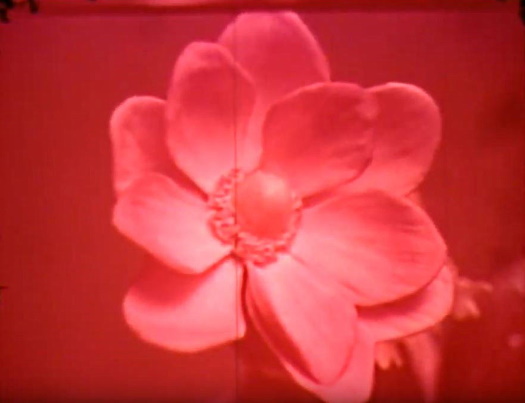 A screen grab of the Windflower as it currently exists in the film, 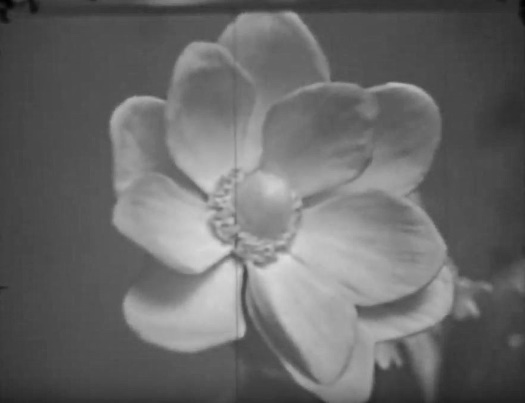 then converted to black and white, and lastly, 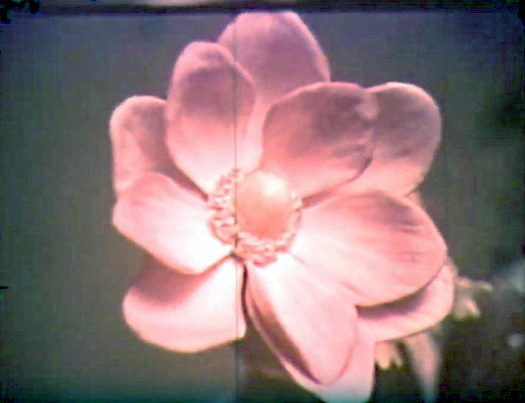 the red original with a one-click histogram auto-adjustment in Paint.net, a basic free photo editing tool – done simply out of my idle curiosity.

As for the film itself, here is my personal review. If you are expecting a “tour” of the Cybis studio, or a detailed look behind the scenes of how sculptures were made, you will be disappointed. The film, which is a voiceover narration (we never see the face or hear the voice of any Cybis artist or employee) with musical insertions, is instead an artistic/emotional interpretation of the creative process. All of the 17 sculptures (plus the Chess Set) shown in the film are limited editions from the 1960s and 1970s, except for one: the Madonna with Bird. In most cases, a given piece is on screen for only a few seconds. That said, the film must have been lovely in its original form and if you are in the mood for a relaxing, “zen”-mood experience (and can ignore the vivid red cast) I would definitely recommend it.

The writers were Maynard Clark and Arthur G. Miller, who collaborated on several short films under their company name of Probe Associates during the early 1970s.

Many thanks to my friend and fellow Cybis enthusiast for making Porcelain Enchantments available to view online via his YouTube Channel. His video, embedded below, is about 30 minutes long, 25 minutes of which is the Cybis film itself.

The third and final Cybis short film was registered in 1981 with the U.S. Copyright Office. Like the second film, its title corresponded to the studio’s current advertising tagline (“Porcelains That Fire the Imagination”) which was also registered with the Trademark Office.

The copyright entry indicates the length (12 minutes), that it contained sound and color, and was shot on 16mm film (with luck, not on Eastmancolor.)  Notice that this entry does not include the name of the production company; it may have been Probe Associates again, or it may not. The Library of Congress entry for this film is not available online. 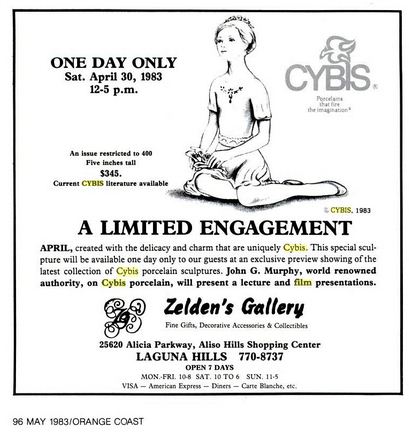 This film, too, made the rounds of retailer Cybis events; this 1983 ad does not give the film’s title but the odds are that the newest (1981) was the one they used. So it was in circulation for at least two years, if not longer.

It is possible that this film is the one that reportedly contains a sequence showing the Dahlia ‘blooming’ within the kiln during firing. At least one collector with whom I correspond recalls seeing a portion of a show broadcast on a Tulsa, Oklahoma PBS station with a best-guess timeframe of 1981 or 1982. It is possible (again, anecdotally) that the PBS segment contained an interview with actress Zsa Zsa Gabor who had a number of pieces of Cybis in her personal collection. Whether this was part of the Cybis film, or was something added by PBS, is unknown.

There is also an intriguing mention on page 36 of A Quest for Excellence, the fascinating autobiography by Ira Jacobson, owner of Brielle Galleries which was one of Cybis’s largest retailers. Describing the personal tours that he began conducting at the gallery in the early 1970s, he says

People needed to see the processes that created these works of art…I purchased a projector and [motorized screen and] folding-style accordion doors for one of the galleries…In the middle of the day, after the tours, I turned out the lights and showed two 17-minute, professionally produced films about how the Cybis and Boehm sculptures were made. There was no audio, so I narrated it, explaining the techniques used for making porcelain.

Of course the Holy Grail would be to locate a copy of each of the Cybis films. Sadly, inquiries to various PBS stations that may have aired the 1981 film have turned up nothing. CINE does not share films or videos from their archives. Theresa Chorlton, the last surviving owner of the Cybis studio, did not join the studio until the mid-1980s. When I asked her several years ago about the films, she said that she had no knowledge of them nor where any copies might be. Copies loaned to retailers for event showings during the 1970s and early 1980s were supposed to have been returned to the studio afterwards although, luckily for us, an Armstrong’s copy wasn’t. Although the 1972 film will undoubtedly have red-shifted just like Porcelain Enchantments did, there is a chance that the 1981 film might have been shot on Ektachrome or Kodachrome film; if so, it would still retain its original colors today.

If any reader has seen either the 1972 chess-set film, or the 1981 film with the kiln-blooming Dahlia, at a past Cybis event or on television, I would love to be able to add your recollections.  There is a contact form at the link below. It is fascinating to know that Cybis porcelains had their own special foray onto the “silver screen!”