The convoluted subject of the various Cybis porcelain ‘collections’ is addressed in a separate post, but a particular one recently aroused my detective instincts. The ‘New Jersey Collection’ seems to have appeared in 1992, possibly in connection with a local centennial although it’s unclear which one. These pieces were obviously intended to appeal to a local/regional customer base. I have found no illustrated advertising materials (Cybis drastically curtailed such efforts during the 1990s as a cost-cutting measure) and so must try to identify the sculptures via other means. All of these were adaptations or re-issues of previously released and retired items.

The pieces in this collection are unusual in that it is one of only two retail series in which the pieces received a decal-applied backstamp; the other instance was the 50th Anniversary Collection in which only the pieces physically produced during 1989 had a special backstamp.

This is the Made in New Jersey, USA decal stamp that supposedly appears on all of the New Jersey Collection pieces. (The decal was applied upside down, on this example.)  A November 1992 article in the local Trentonian newspaper, describing a public tour of the studio, mentions

..the moderately priced New Jersey Collection…Each of the Garden State-related sculptures contains a ‘Made in New Jersey, USA’ logo, a promotion of the State Department of Commerce’s division of international trade.

However, a Google search does not show this exact logo among the official ones. The example above is on an Eagle Atop the Palisades.

The pieces below are titled as they appear on the 1993 Cybis price lists.

Appearing on the March 1993 price list, under the heading ‘New Jersey Collection’, this is titled simply Horse, with no design number and no dimensions but with a $150 price… probably indicating a Winter 1992 at-the-studio-only debut. However, the Fall 1993 price list gives its name as New Jersey Animal, The Horse; its design number as  #6146, dimensions of 7.75” high and 7.5” wide and a retail price of $195.

The only known Cybis horse that matches this exact size is Black Beauty which was issued in 1988 as design #6094. He was retired before 1993. It seems obvious that Black Beauty was retired so that he could be re-introduced as the upcoming New Jersey Collection piece.

Black Beauty himself was actually a slightly modified version of the unicorn Lord Bentley who was introduced in 1987. The only difference between Black Beauty and Lord Bentley is the horse’s head position, which of course makes Lord Bentley slightly “shorter.” Because Lord Bentley was still being offered by Cybis during the 1990s, my guess is that the New Jersey Horse probably has the upright/forward-looking Black Beauty head position. What I don’t know is what color the New Jersey version is. It would not have made sense to have done him in either black or white – the originals having been those colors – and so probably he was brown or gray. If anyone happens to have either of these Cybis horses with a Made in New Jersey USA stamp on it, I’d love a photo; there is a contact form link at the end of this post.

The horse was declared the state animal of New Jersey by Governor Brendan Byrne in 1977, who declared that “The founding fathers of our state thought so highly of the horse that they included it in our State seal.”

Like the horse, this item appears on the March 1993 price list under the NJ heading with no information other than a title (Goldfinch) and a price ($295.)  On the November list it shows up as New Jersey Bird, the Goldfinch. It has design #3004 and a slightly lower price (will miracles never cease?) of $275. Dimensions are given as 4.25″ high and 4.5″ wide. If anyone has an example of this version, I’d love a photo.

This was the third of the three NJ pieces shown in the March 1993 price list, cited merely as Violet and priced at $295. No, that’s not a typo: The flower was more expensive than the horse. On the November list, we see it as New Jersey Flower, The Violet …and just like the Goldfinch, also now $20 less expensive. The size is now given, at 4.5″ high x 4″ wide. The design number is shown as #20561 which may appear out of the norm for a Cybis flower piece; those design numbers normally begin with 5. (The 2xxx design numbers had always been reserved for the religious pieces.) However, if one drops the first two digits (20) the design number becomes 561 which does make sense. Neither this piece or the #3004 Goldfinch survived to earn a place on the circa-2000s Cybis website, however.

The violet (Viola sororia) had a tough time becoming the official flower of New Jersey. Originally proposed as such in 1913, the legislation failed. Another attempt was made in 1963 but had no better luck. Finally in 1971 (third time’s the charm?) it succeeded!

The cited dimensions of this piece (6” h x 5” w) plus the design number (#3001) clearly identify the NJ piece as the same 1988 Goldfinch with Violets that is shown in the photo above. At some point between 1989 and 1992 that piece was either retired or simply removed from the Birds category, put into the ‘New Jersey Collection’ and renamed the New Jersey Finch with Violets. (After the studio discontinued the NJ Collection during the 2000s, he flew back to Birds and resumed his original name.) In his 1980s name/incarnation this piece sold for $425 but after perching in the NJ Collection in November 1993, it jumped to $675…and stayed there even after the NJ Collection was no longer ‘a thing.’  Despite the price, this was never a limited edition.

The Eastern Goldfinch (Carduelis tristis) has been the New Jersey state bird since 1935.

It is very possible that the New Jersey Violet may merely be part of the base section of this 1988/1993 piece, but with the vertical branch shortened. Given that all of the other New Jersey Collection pieces are ‘re-treads’, this would not surprise me at all.

The New Jersey Vase with Violets

One of these finally turned up in a 2022 auction house sale; before that, I had no clue what this looked like because the Cybis website had no photo of it. It is 5.25” high and 4.25” wide. The design number is #938. This is actually their 1983 Daisy Vase but with the boss of flowers in the front changed from daisies to violets. The back of both designs are identical. The foliage on this vase does not match that of either daisies or violets, and looks more like an iris than anything else – except that the flowers shown on the back are not iris. The price of the New Jersey Vase with Violets was $295 upon introduction in Fall 1993. 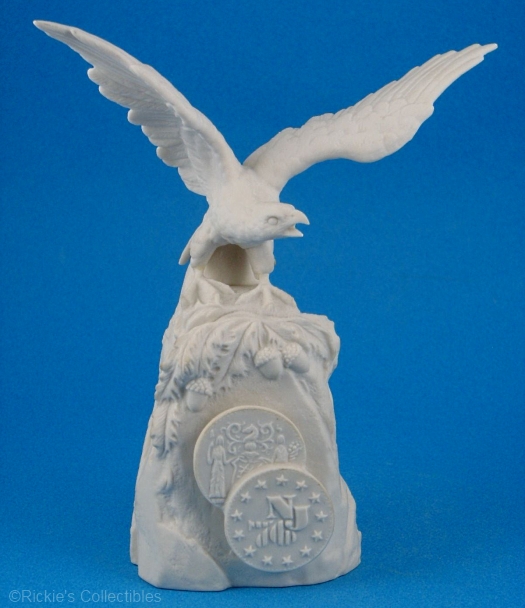 The Eagle Atop the Palisades was originally issued in 1976 to commemorate the New Jersey State Bicentennial. It is 8.25″ high and 7.5″ wide. It was advertised as being an open edition, available for sale during that year only, for $150. The base is adorned with two medallions: one showing the New Jersey State Seal and slightly in front of it, the official New Jersey Bicentennial Logo. This piece disappeared in 1977 along with the studio’s other Bicentennial-only items.

When Cybis later resurrected it in 1993 for the New Jersey Collection they set its new price at $575. Whether they omitted the Bicentennial seal/mold from the 1990s casting is unknown, because I have never seen one of these and it was not pictured on their website, but it would seem logical for them to have removed it.

The eagle has an indirect connection with New Jersey in that its population of bald eagles had been pushed to the brink of extinction by the early 1970s. The state’s Fish and Wildlife Commission, together with various conservation groups, worked tirelessly to rebuild the eagle population for the next 40 years until as of last year there were more than 170 nests recorded. 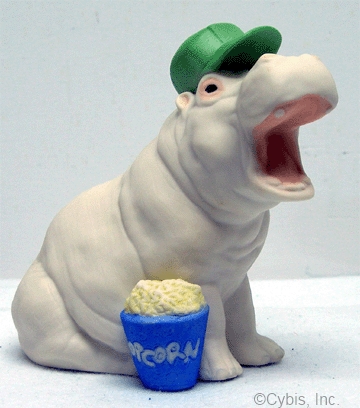 I honestly have no idea why this piece was added to the New Jersey Collection on the Fall 1995 price list, unless they were absolutely desperate to offer something new. On that list he appears only by design number (6126) and name (Hippo ‘Play Ball’); no dimensions or retail price. He is, of course, the same as Hippo ‘T.G.I.F.’ from 1986 but with a baseball cap and container of popcorn added. Not only is there nothing on this piece to identify it with New Jersey, but New Jersey does not even have a major league baseball team! The original (T.G.I.F., design #6057) was actually still on that list for $135.

Both hippos still appear on the Fall 1997 price list, with T.G.I.F. now at $150 but his NJ variant now called Hippo Baseball Fan (Play Ball) at the significantly higher price point of $475. I shall leave you to muse upon whether a cap mold swiped from the Golf Bunnies, and a container of popcorn, justify an additional $325 (a hint: I don’t!). Especially since I happen to know that that this very cap-and-popcorn combo model was the brainchild of Cybis artist William Pae, during the 1980s; it was not something that the studio came up with specifically for the NJ branding, but had been sitting on the studio shelves for more than a decade.

After the New Jersey Collection was eliminated in the 2000s he was sent back the Animals and Sports categories of the Cybis web site while retaining his 1997 name. In this regard he outlasted most of the other “New Jersey” pieces!