Although we know that Cybis used molds bought from other companies to produce almost all of their 1950s retail line, their local competitor Boehm seemed to have eschewed this practice – or so I thought until recently, when I found a singing-angel figurine made by both studios during that decade.  And they weren’t alone: at least one other (probably local) studio was doing the same thing. Of course this sets the stage for the inevitable contest of who did this particular piece in the most attractive way: a singing-angel beauty pageant, so to speak!

This little angel is 4.5” high; all three versions are glazed.

Our first contestant is the Cybis angel. Her white robe displays just a touch of glam via the narrow gold sleeve border as she balances a single pink rose upon her blank sheet music score. Dainty pink pigtail bows match the rose. Her wings display a soft gray-blue ombre effect on their lower half. (Larger images  can be found in the Angels post.) 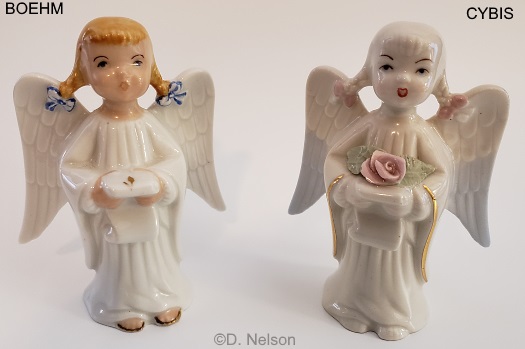 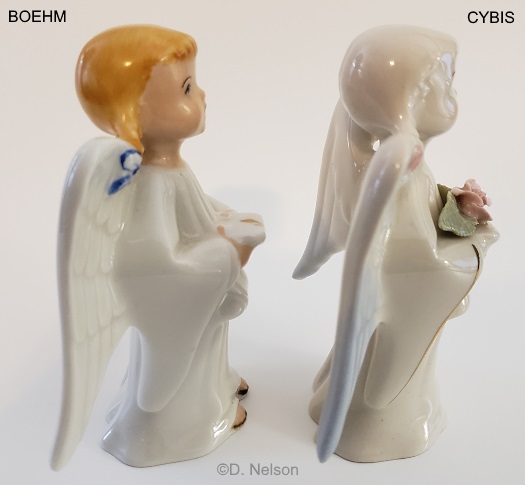 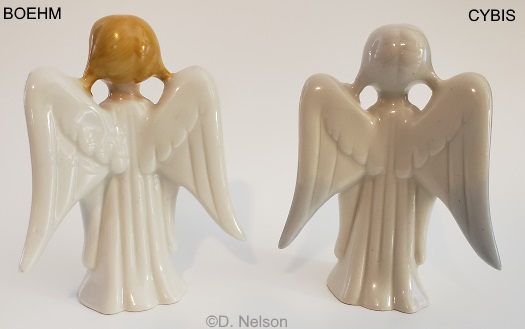 Contestant #2 is the Boehm angel who is both plainer in decoration and more colorful. It’s hard to determine whether the single gold accent on her music scroll is meant to be a rosebud or an awkwardly-drawn eighth note. Her robe and wings are completely white but she wears painted ‘sandals’ while the Cybis angel is barefoot. The biggest difference between the two is the skin and hair coloration: the Cybis angel has a barely perceptible faint blush on her cheeks while the Boehm angel has clearly been spending her off-duty hours at the beach. Her face and hair bows are very much a focal point.

The third entrant was produced by an unknown manufacturer whose only mark is a ‘Fine China’ stamp on the underside. No doubt it originally had a paper brand sticker that was long since removed. Obviously quite fashion-forward and just a bit edgy, her wings are bling’ed with gold paint, as are her hair bows, and her hair is painted in an eye-catching (almost punk?) combo of black on white. Speaking of eyes, hers are by far the most noticeable and complete with painted eyelashes which her compatriots lack. Her skin tone is exactly midway between the other two and thus, in that respect, the most natural looking.

The underside marks of all three. The Boehm and Cybis signatures firmly date those to the 1950s. Not having an indication of the manufacturer of the third, her actual age remains undetermined.

This mold was made and sold by the Holland Mold Company (located in Trenton) to both wholesale and retail customers. Some hobbyists removed the Holland name impression and some did not. Cybis and Boehm certainly did. Although two of the three angels competing above were cast in porcelain, many hobby molds were done in ceramic and perhaps even chalkware. A  few hobby mold examples are shown below. 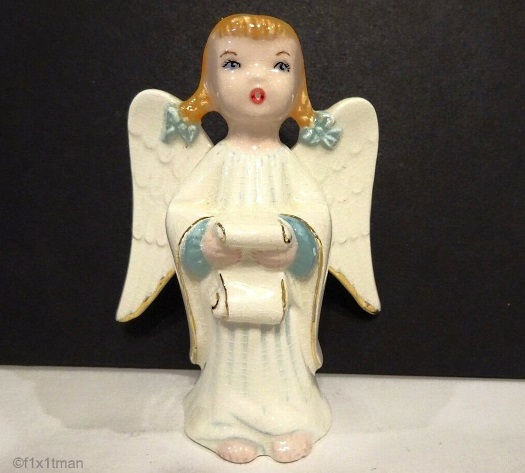 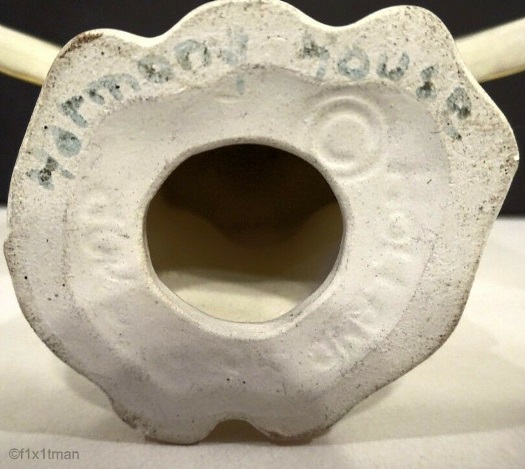 Despite the “Harmony House” notation on the underside I believe this to have been a hobbyist angel. It actually shows an interesting attention to detail, with the thin gold edges and the matching color of the inside sleeves and hair bows. The robe has subtle blue shading in the folds, the eyes are well painted and the skin tone is good. Unfortunately it also shows significant surface crazing. The reason I think this was not made as a retail piece is that the Holland impressions were not removed, and the name is painted crudely.

The potter who created this pair definitely had plenty of gold paint on hand because it was used for every accent except their eyes and lips – even their toenails! And doesn’t the righthand angel look seriously annoyed about something? Amazing what one eyebrow line can convey, LOL.

This pink and blue duo is interesting for both the colors (which I think are quite attractive) and having a matte finish rather than glazed. These are by far the most realistic; notice the lightly tinted finger and toe nails. Even the faux lyrics on their sheet music are painstakingly done.  I don’t know who “T. Johnson” was but he or she did a very professional looking job on these angels.

A far more typical hobbyist example is this pair, which I’m including to show that a companion boy angel mold was offered as well. However, I’ve not yet come across any male angel figurines by either Cybis or Boehm. The boy angel is inscribed 1976 by the potter. The original Holland Mold Company was sold by the Hollendonner family in 1997 but this angel mold was probably discontinued long before then.

Both Cybis and Boehm stopped making this angel before the 1960s. Many thanks to my “angel pageant organizer” D. Nelson who provided the porcelain runway show!