Among the pieces that George Ivers created or painted while he was the Art Director of the Cybis studio are four tales from the Old Testament. Unlike the 1971-72 Limnettes – which were retail pieces – these do not appear in any of the Cybis general retail price lists that I have found. However, I’m not discounting the possibility that they may have been created as a special commission or even as charity event/auction items.

The tales were painted as scenes on several small plaques and four known freestanding sculptures. The ‘body’ of each sculpture represents an element of nature that corresponds to the biblical scene painted upon it.

Unfortunately the auction house that disposed of these in 2019 did not supply individual dimensions because these were part of a mixed lot of various religious subjects, but I have estimated the heights by comparing them with the known size of adjacent pieces in the photograph.

Because it’s unlikely these were given official names, I’ve taken it upon myself to title them here. 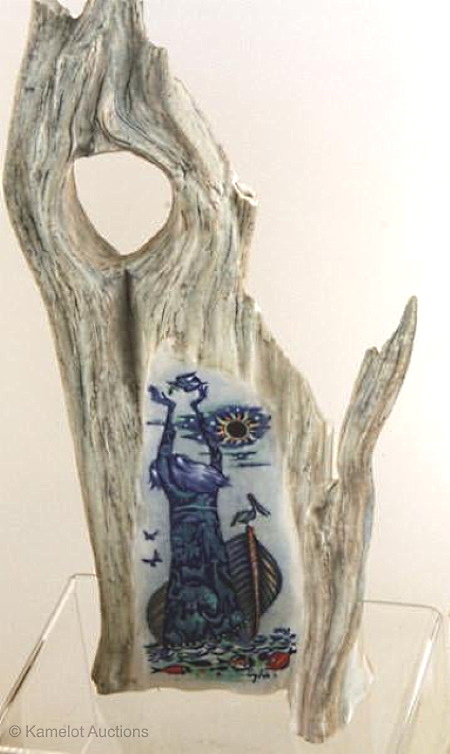 Noah on Driftwood is the tallest of the four sculptures and is probably close to 13” high. Here Noah is seen releasing a dove (which bears an uncanny resemblance to the Cybis phoenix logo!) while somewhat illogically appearing to stand atop the water rather than inside his boat – but that’s artistic license for you!

Moses on Rock shows him with the Ten Commandments. These photos were not optimally lighted and so much of the detail in the painted section appears dark and murky. The front of each is signed Cybis and also Ivers although it’s hard to discern the Ivers signature in the sculpture photos. With only one exception, George Ivers was the only artist whose name the studio ever allowed to appear on a Cybis piece. (The exception was Nashua which was taken from the oil painting by James Nelson Slick; he would not allow Cybis to create the piece unless his name appeared on it.) All their other artists – even Laszlo Ispanky – were forced to remain anonymous. A good height estimate for this is probably about eleven inches.

Jonah on Wave is quite dramatic with the whale looming up behind him! In this design Ivers’ signature appears just above the top of the small waves on the right-hand side. I would guess this piece to be about 12” high because it is slightly shorter than the Noah one.

I suppose the simplest title for this is Adam and Eve on Tree. This is the shortest of the four and is probably 10” high, give or take a fraction, but is the most complex ‘body piece’ in terms of workmanship. It’s too bad that the auction house only showed one angle of each item, and that some items were partially obscured by others.

The same scenes were also portrayed on small plaques; two of them were among the items in the studio’s liquidation sales.  Again we must estimate probable size from less-than-optimal photographs; these are likely to be about 2”-3” wide and 6”-7” tall. This is a Jonah Plaque and a Noah Plaque.

Here is a much better photograph of a framed pair of Noah and Moses plaques. This is in the collection of the museum of Yeshiva University, who cites them as having been made in 1970. 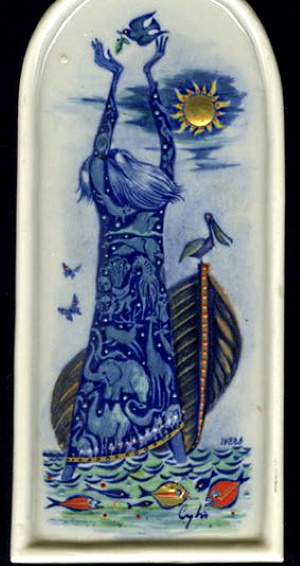 These photos also allow us to see the details that aren’t very apparent in the other photos, including the 24k gold paint highlights.

They also bring the dual signature areas into better view.

If anyone knows any additional details about either the plaques or the freestanding sculptures – such as whether they were available as gallery-event pieces, or done for a charity event – I would love to be able to add that information; there is a direct-contact form on the the About the Archive page. It is unfortunate that no photo was provided of the back side of the sculptural versions, which may well give a clue to whether those were part of a small, unadvertised retail/event run or are one of a kind.

George Ivers’ three Limnettes series for Cybis are shown on their own Archive page.

Images of Cybis porcelain sculptures are provided for informational and educational purposes only. All photographs are copyrighted by their owner as indicated via watermark. Images bearing a Cybis watermark appear here by kind permission of Cybis, Inc. for use solely as reference material herein. Please see the copyright notice in the footer and sidebar for important information regarding the text that appears within this web site.