When researching Cybis porcelain it is rarely possible to point to two different sculptures and definitively state “This became that” in its entirety (body-snatching doesn’t really qualify, although numerous instances of that practice have been found.) This is especially true when it comes to the earliest (1940s) pieces, many of which were either one of a kind or simply decorative variations of the same basic mold.

However, one such unquestionably linear example has been found, as a result of the liquidation of the studio’s holdings: an angel bust originally created by Marja Cybis and then reproduced line-for-line, designwise, in porcelain. 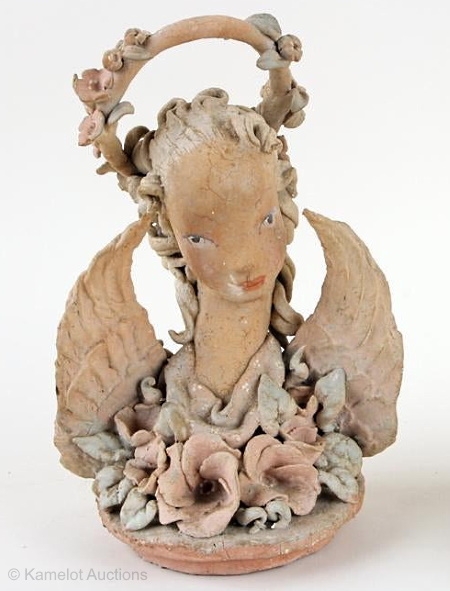 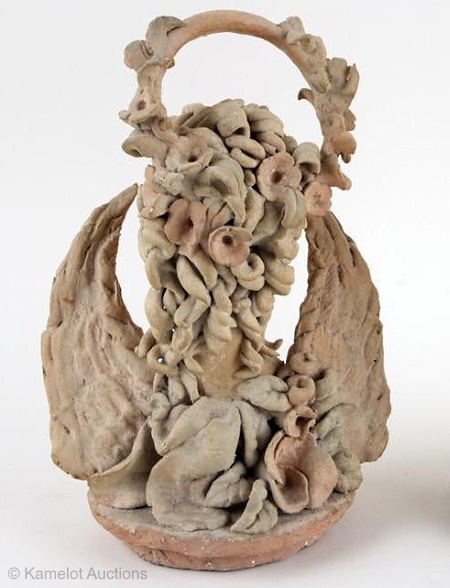 This winged angel bust with halo is made entirely of “papka” which is what the 1940s Cybis studio called their modeling-clay-like material that was subsequently fired. It is easy to mold by hand but the finished product is prone to cracks and breakage, especially if not stored or packaged properly. 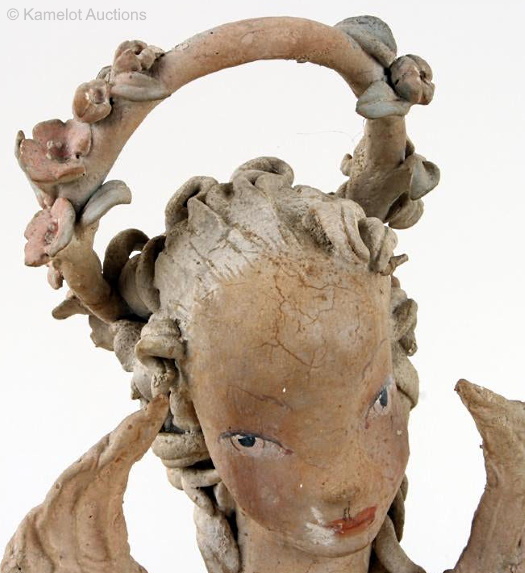 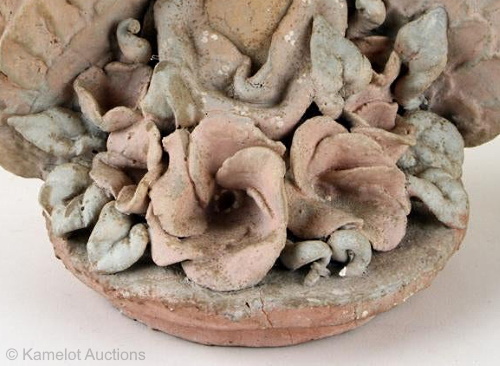 I suspect that there is a wire or other non-ceramic ‘core’ inside this papka-covered halo. The head mold may well be the original prototype for one that became a mainstay of other 1940s lady busts. 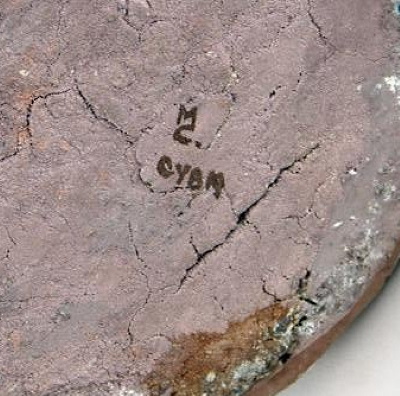 The MC added to the plain Cybis signature indicates that this piece was made by Marja Cybis rather than anyone else in the studio. This was probably created in the early 1940s, quite possibly when the Cybises were living at the Steinway Mansion in New York. 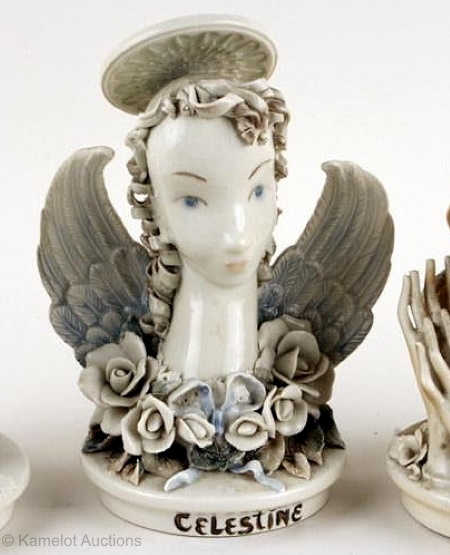 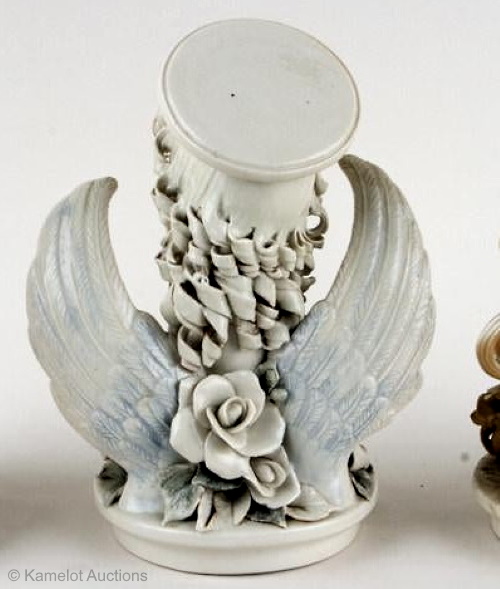 Here is the porcelain version, using four cast-porcelain (from molds) elements – the head/neck, the base, the wings, and the halo – and titled Celestine on the base. This is a faithful reproduction of Marja Cybis’ original piece in the newer medium. 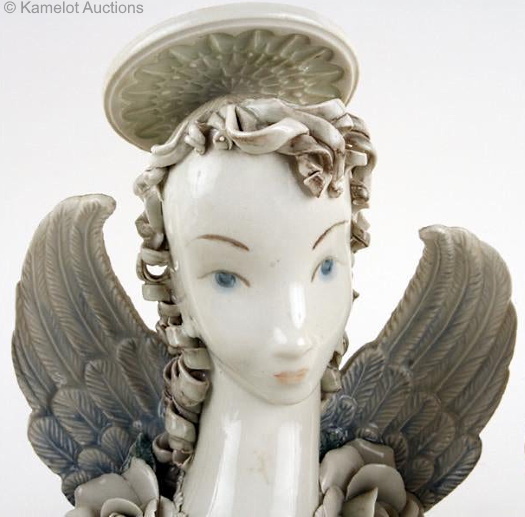 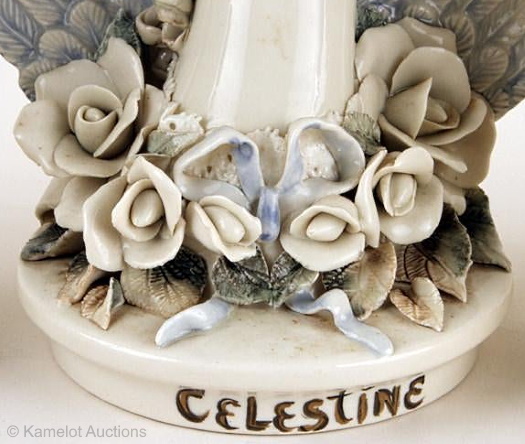 The handmade hair curls, roses, leaves and ribbons are all formed from porcelain, not papka. Notice the dipped-lace collar edge visible behind the bow and roses. 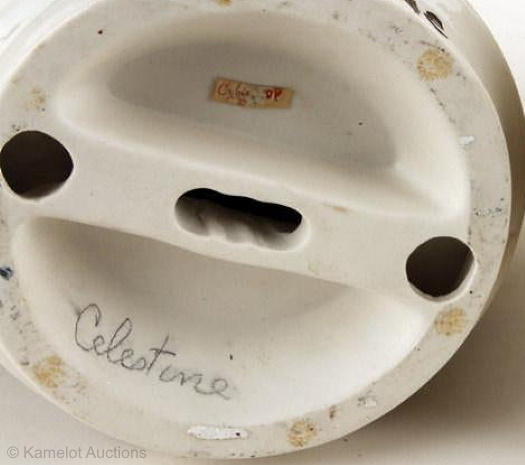 This is a true marriage of 1940s-Cordey decoration with 1950s-Cybis painting and shading. The blue of her wings is a close if not identical match for several known 1950s Cybis retail pieces. The underside still retains its original (and rarely encountered) Cybis gummed sticker which bears the notation DP in red ink.  It is possible that this stood for “design proof” although there’s no way to be sure of that meaning. Others have been found that appear to say DK.

So, how much time separates the creation of the original papka piece from the porcelain one? My guess is that it is the better part of a decade, with Marja creating the papka piece between 1940 and 1942 but Celestine not appearing until the end of that decade or even later. There are two indicators for the later date: (1) the gummed sticker appears – as of this writing – to have been used during the very end of the 40s and the early part of the 1950s; and (2) the halo. 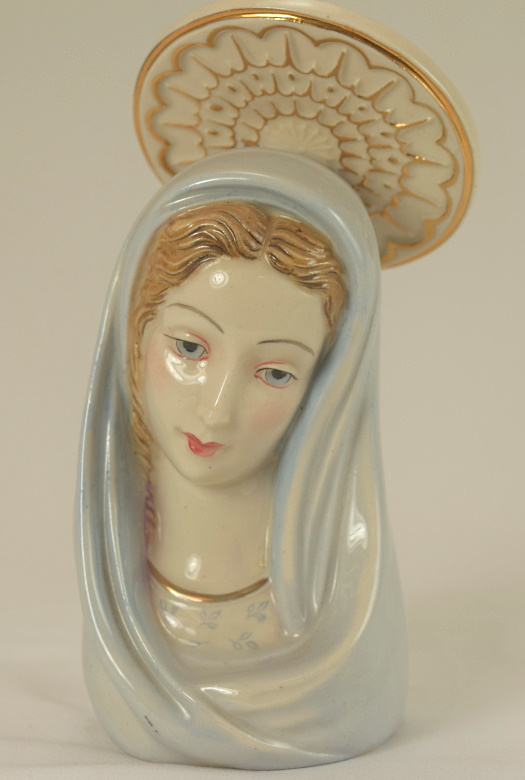 It is the identical halo mold that was used on this Mother Most Admirable bust that Cybis began selling during the 1950s. Their design number for this piece was 2020 and it can be seen in its many 1950s iterations in the Early Madonnas post. However, only one has thus far been found wearing a halo. All indications point to this particular piece being one of the early ones, i.e. probably made at the very start of the decade. The fact that they already had this particular halo mold on hand to use for Celestine is a very strong argument for that angel being made at the very end of the 1940s or even the early 1950s. Almost all of the 1950s Cybis retail pieces were produced from molds they bought from other companies – and thus were not original Cybis designs – and so if Celestine was indeed made in the early 1950s she is one of very few “Fifties Originals” that we know of.

It is rare to see such a literal translation from an early Cybis piece to a “modern” one (especially if Celestine was made in the early 1950s), but in these two pieces we have exactly that.

Images of Cybis porcelain sculptures are provided for informational and educational purposes only. All photographs are copyrighted by their owner as indicated via watermark.  Please see the copyright notice in the footer and sidebar for important information regarding the text that appears within this web site.