Some observers and/or collectors of Cybis may be puzzled by the appearance of pieces that appear to be Cybis but lack (or present in a different form) one or more of the typical Cybis attributes. Some of these sculptures derive from molds that were available to the entire ceramics market (as described in When Is a Cybis Not a Cybis?) and may be later offered for sale as “unsigned Cybis”.  Naturally most of these lack the same paint colors or artistic style of decoration as the Cybis artists, but I have seen a few examples of copies that would definitely fool someone who is not familar with the authentic Cybis “look” and simply relied on the piece being marked or marketed as Cybis in some way.

Cybis also made quite a few sculptures that do not appear in any retail literature anywhere; these are addressed in Making Sense of the Editions. So if a particular Cybis piece – especially if religious-themed – cannot be found on ebay or anywhere else, that does not necessarily mean that it is “illegitimate”. If the religious piece is relatively small, chances are that it was a special commission for a local church; if it is also glazed rather than bisque, that is even more likely. This is not to say that Cybis never did bisque (matte-finish) special commissions for churches,  only that glazed ones were done more often. Also, not all special commissions were religious pieces although the great majority of them were. An example of a non-religious special commission is the Spirit of Ecstasy (Flying Lady) that was done for the Rolls-Royce owners club and does not appear in any Cybis literature because it was a privately commissioned limited edition. However, all such special commissions were always signed Cybis.

Another thing to keep in mind when considering any limited edition piece that is marked as an Artist’s Proof (A.P.) and also with a handpainted sculpture number is to question why the sculpture bears both designations. Theoretically an Artist’s Proof is supposed to be either one of a kind or the “painting standard” for the entire edition, and thus should not also bear a number in way that all the sculptures in the retail issue do: It should be one or the other (A.P. or normal limited edition) but not both.  Unfortunately the Cybis studio itself was guilty of adding an AP designation to an already-numbered limited edition piece. So be aware that there are sculptures that came from the studio bearing both designations BUT it would also be easy for an unscrupulous reseller to add an AP designation in the proper color of paint (which is another reason I wish that the studio never began the practice of adding AP to an already-numbered piece).

One must also be aware that certain sculptures were re-issued in a downsized and very slightly modified form as Hall of Fame editions and to know which sculptures they were, to avoid mistakenly branding a HOF piece as a knockoff. (Examples of actual Cybis knockoffs can be seen in the Hall of Shame post.)

For less obvious examples it’s important to pay close attention to certain key elements when encountering a sculpture claimed to be an “unsigned” Cybis, or is represented by a seller to be Cybis but differs noticeably from photographs of the genuine article. Let’s begin with the sculpture mold itself:

An understanding of how most Cybis “lookalikes” are created is key. As mentioned above, the most likely candidates for true knockoffs are sculptures that came from relatively simple design molds and have no delicate applied decorations such ribbons, lace, tendrils, leaves or flowers — at least, to begin with.

Sometimes a lookalike will contain some very small and/or subtle difference in the mold as compared to the Cybis version. For instance, the lookalike girl head/bust (originally a Holland Mold) often seen on ebay has a small wavy lock of hair at the right front of the girl’s hairline; neither the genuine Head of Girl nor its Hall of Fame version have any such bit of hair. However, all of the Holland Mold pieces have it because that mold was made that way. If you compare a photo of the two side-by-side, the difference is easy to see. However, anyone taking only a cursory look at a photo of the genuine piece, without taking the time to compare the lookalike to it in detail, might assume it is an “unsigned Cybis” and list it for sale as such.

The explanation of the existence of the ubiquitous Boy and Girl heads can be found in the When Is a Cybis Not a Cybis post.

Cybis traditionally used specific colors and finishes and shapes for their bases and very rarely departed from those norms. When they did do so, all of those sculptures were produced with the same base. For instance, Cybis did not regularly use a black wood base but there are several exceptions. The Spirit of Ecstasy is mounted on a black semi-gloss wood base which was specifically designed for that sculpture.

The majority of Cybis bases were plain squares or rectangles, primarily because these were the least expensive to have produced. With three known exceptions (sculptures of a T’ang Dynasty kung-fu warrior that came with a black Lucite base, and a very few late 1990s/early 2000s pieces that had an optional porcelain base) they were usually made of wood.  Cybis non-porcelain bases never have any sort of painted or gilt decoration. The only decorative element ever added to a base would be (in a few cases) an attached medallion or engraved brass plaque.

For sculptures that originally came with an accompanying base, rather than being physically attached to one, the matter of legitimacy comes down to personal preference. Take for example the Pinto Colt from the 1970s; the base that accompanies this sculpture is a rarity among Cybis because it has a velveteen fabric top. The colt is not attached to the base, but is simply placed upon it. The ideal would be for this piece to come with its original base. But suppose you saw a genuine mint condition Pinto Colt for sale but with a plain wood base? The base is clearly not the original, and so while the sculpture is genuine the base is not. Or perhaps it has no accompanying base at all. Are both of these still genuine Cybis? Yes they are, but the lack of its original base means that they are not “complete as produced.” Depending on how much it matters to have a piece exactly as it was when it left the Cybis studio, its value to a buyer may or may not be lessened. However, the sculpture itself is still genuine.

But keep in mind that it’s entirely possible to have a genuine Cybis physically attached to a non-original (non-Cybis) wood base, because the busts were attached via a toggle bolt and wing nut, easily accessible once the felt covering on the bottom of the wood is removed.

The Archive post Base Behavior contains a complete list of all Cybis known to have originally come on or with a base, with examples of many.

Felting on the Underside

The presence or absence of felt circles (or even completely felted undersides) is not in itself an indication of non-authenticity. Cybis was sometimes inconsistent as to which pieces were produced with any kind of felting on the underside.

The three photos below all show the undersides of a special brown version of the late-1980s Cybis bunnies Jellybean, Snowflake, and Bunnykins. I purchased them at the Cybis Studio itself during the 1990s, exactly as they are shown here. Notice that two of them have small green felt circles while the other does not. 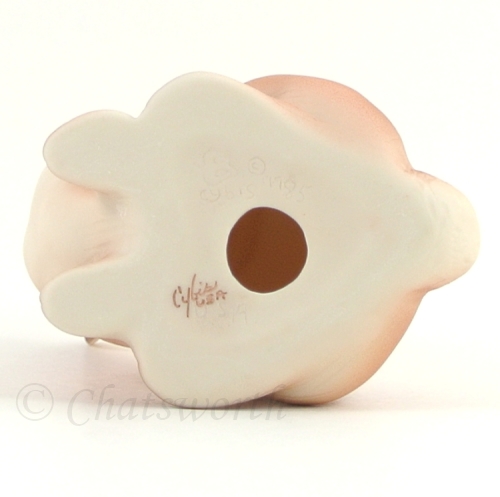 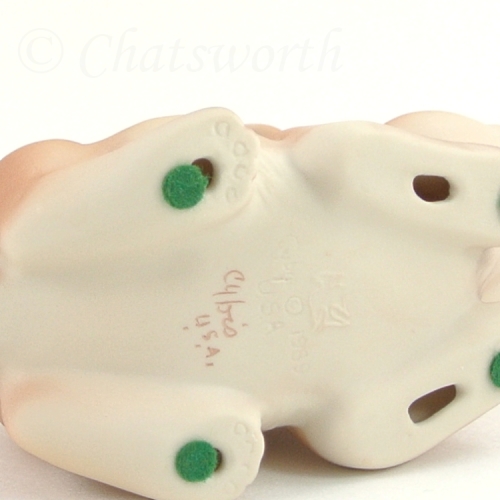 However, despite Cybis having put felt circles on these particular bunnies, the normal standard white retail edition versions do not have any felt at all! How many of the other examples of the rare brown bunnies also have the felt circles? I have no idea, but I do know that my three are mint and “as produced” with them.

The topic of authenticating Cybis continues in Part Two and addresses painting and decoration.