Here are five Cybis designs in honor of Mothers’ Day and of moms everywhere. 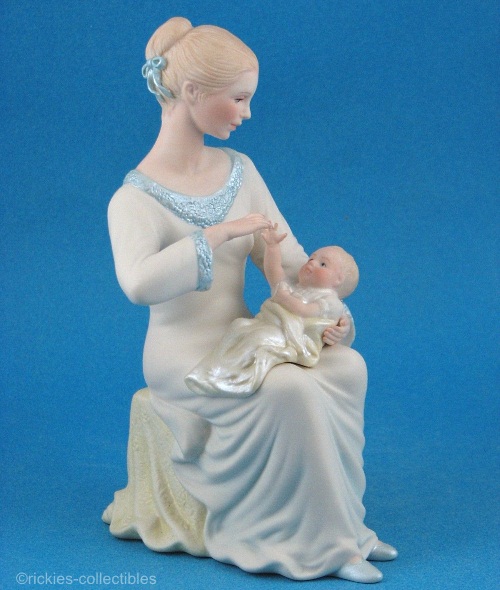 ‘First Born’, Virginia Dare is 8″ high overall. On August 18, 1587, Virginia Dare became the first baby born on American soil to British parents. She was born on Roanoke Island which was part of the Virginia Colony for which she was named. Here she is held by her mother, Eleanor Dare.

This sculpture has a very interesting edition history. It was introduced in Cybis’ spring 1987 brochure along with several other pieces described as being a “Constitutional Collection” honoring the bicentennial of that document.  Although identified as a non-limited edition for $450, the brochure also stated that the sculptures “produced during the Constitutional Celebration will be numbered.” The Celebration referenced was a four-month event in Philadelphia, from May through August 1987…. and indeed some of these are numbered whilst others are not. I don’t know how far Cybis got in the numbering, but the highest I have so far seen (thanks to a helpful reader!) is 165. If anyone has a higher-numbered Virginia Dare, please let me know so that I can update this information; there is a contact form on the About the Archive page. By the way, only one other 1987 “Constitutional” open edition that received this special summer-of-1987 numbering was the Golden Eagle. I have never heard of Cybis doing such a thing with any other nonlimited retail editions.

Eskimo Mother ‘Alea’ was released in 1973 as an edition of 350 sculptures with a price of $1875. The edition was later reduced to only 200 closed in 1982 at a price of $2500. It stands 11” tall. The sculpture is based on the Inuit legend of a woman who, while walking along the shore one day, discovered a baby polar bear. She took the baby bear home, named him Kunik, and raised him tenderly. In order to protect him from hunters by identifying him as a pet, she wove a plaited sealskin collar which can be seen on the pup the Cybis mother holds.

This piece was later selected by Canada to be their official royal wedding gift to Prince Charles and Lady Diana in 1981, and also by President Ford as a gift of state to Premier Brezhnev. One was also presented, along with the two Eskimo child busts Amouleegah and Ahmah, to the Gerald Ford White House in 1975. 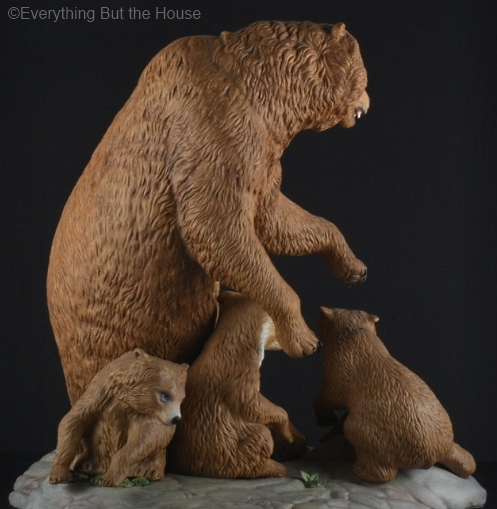 Mother Bear with Three Cubs was an issue of only 100 sculptures, an artist’s proof of which was presented to Queen Elizabeth II as California’s state gift when she visited in 1983. It was brought to Sacramento by Joseph Chorlton, head of the Cybis studio, who literally accompanied it every step of the way of the cross-country trip. As related on the Cybis website, he told reporters “We wanted to be sure it arrived safely, so we purchased its own first-class airline ticket.” At least two of the cubs were also available as separate open-edition pieces which are shown in Bulls and Bears.

An open edition sculpture named Mother’s Child, ’First Steps’ was supposedly produced for only one year (1963-1964),  in both a white bisque and color version. The 1978 catalog Appendix titles it this way, but the Spring 1963 price list has it as First Steps (Mother and Child) and puts it into the “Objects D’Art” category. At the cited length (not height) of 18″, this is extremely large for a non-limited edition; my guess is that it probably portrays a mother kneeling and reaching out to a toddler opposite her. This would account for the unusual width. It’s too bad the height was not indicated. The white version sold for $75 and the color for $100.  I have no idea how many were made or sold, but if anyone has this, I would love a photo! 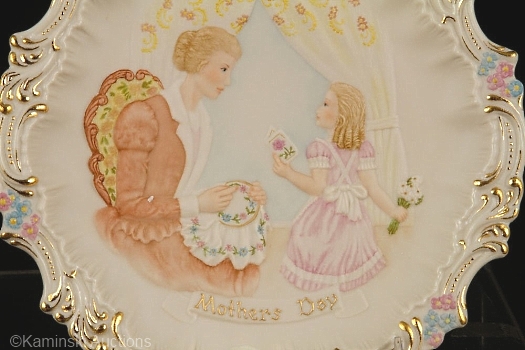 Cybis also produced this 8″ diameter Mothers Day Plate in 1987. It was shown in the introductory brochure as being a limited edition of 2500 at $295. It continued to be available from Cybis into the 2000s but they never completed the full intended edition size.

An ‘honorable mention’ as a Mother’s Day item goes to Sacajawea who was part of the North American Indians series. Even though her sculpture name doesn’t include the word ‘mother’, the sculpture design is based on the story of how the pregnant Sacajawea and her husband were engaged as a guide and interpreter for the Lewis and Clark expedition in 1805. Their child, Jean-Baptiste, was born about two months before the expedition set off, and traveled with them for the entire three-year stint. The Cybis porcelain was an edition of 350 in 1971 for $2250, completed during the mid-1980s.

By the way, for the grammar nerds among us (meaning also moi) I researched the question of where to put the apostrophe in this particular day’s name. A case can be made for any of three possible variants. If the intention is that this day belongs to each individual mother, the correct usage in terms of possession is Mother’s Day; but if taking the view that the day belongs to all mothers collectively, it would be the plural Mothers’ Day. However, if instead one feels that this day is intended for all mothers (in other words, there is no “belonging to”/possession involved), the apostrophe isn’t needed and in that case it would be Mothers Day.

When the holiday was made official by Congress in 1914, the wording of the bill read “Mother’s Day” which was the spelling used by Ann Jarvis, a post-Civil War peace activist of the late 1860s who first proposed the idea of a specific day to honor mothers; the cause was later taken up by her daughter Anna. The traditional flower associated with Mother’s Day has always been the carnation which was Ann Jarvis’ favorite flower.