The sole limited edition basket is the Colonial Basket which represents the official flowers of the original 13 colonies. The flowers included are mountain laurel, trailing arbutus, black-eyed Susan, dogwood, lilac, violet, peach blossom, jasmine and rose. Some states “share” an official flower, hence there are only nine flowers represented. The sculpture measures 10″ x 10″ x 9.5 and was an issue of only 100 pieces, designed by Lynn Klockner Brown. It was made from 1976 to 1978 at a retail price of $2750 (which would be approximately $10,000 in 2015 dollars.) When Queen Elizabeth II visited the United States during its Bicentennial she received an artist’s proof of the Colonial Basket as a gift.

All of the baskets shown below were open editions. All were introduced at a retail price of $325 and were retired at $345. Each contains some of the flowers appearing in the Colonial Basket. The selection and arrangement of the flowers for each of the four smaller baskets was done by Marylin Chorlton.

‘Constancy’ Cherokee Roses with Violets is 5.5” high and 6 “long. It was available only in 1976 and 1977. The “Cherokee rose” is Rosa laevigata which is a climbing rose native to the Far East but became naturalized in America. A Native American legend tells of this rose: In 1838, when the Cherokee who were living in the eastern part of the country were forced to move west and experienced much hardship and death along this “Trail of Tears” the elders prayed to the Heaven Dweller and received this answer: “I will give you a sign. In the morning, tell the women to look back along the trail. Where their tears have fallen, I will cause to grow a plant that will have seven leaves for the seven clans of the Cherokee. Amidst the plant will be a delicate white rose with five petals. In the center of the blossom will be a pile of gold to remind the Cherokee of the white man’s greed for the gold found on the Cherokee homeland. This plant will be sturdy and strong with stickers on all the stems. It will defy anything which tries to destroy it.” The next morning the plant appeared just as the Heaven Dweller had foretold and thus heartened the people found the strength to complete their journey. It is also true that this plant is extremely tenacious and in fact is classed as invasive in the southern part of the country. The yellow flower is jasmine (Gelsemium sempervirens) and the purple is, of course, the wild violet. 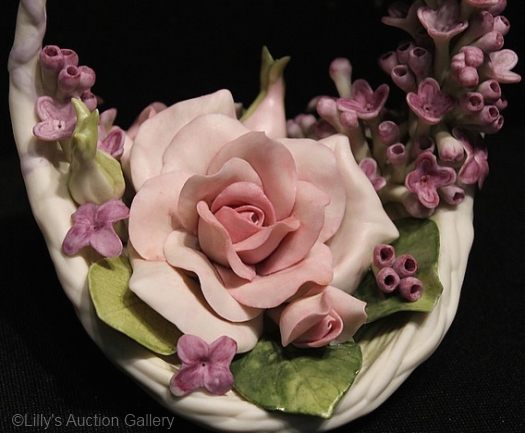 The romantic ‘Devotion’ Roses with Lilacs is 5” high and 6” long; it was introduced in 1976 and retired in 1978. Although six states have some variety of rose as their official flower, New York is the only one that does not specify a species; this one appears to be a hybrid tea. The lilac (Syringa vulgaris) is claimed only by New Hampshire. 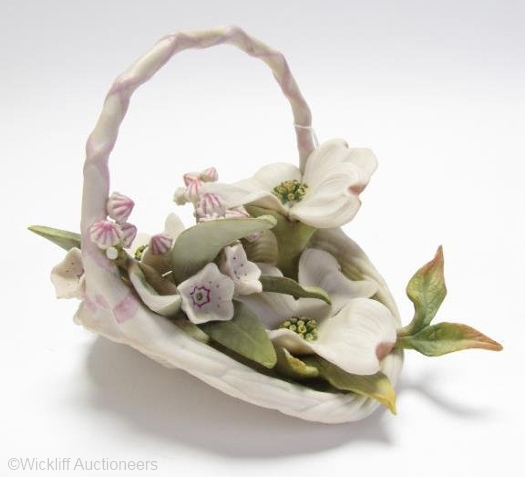 ‘Majesty’ Dogwood and Mountain Laurel is 4.5” high x 5.5” long. Like ‘Constancy’ it was only available in 1976 and 1977. Here the white dogwood, which may represent either Cornus kousa or Cornus florida, is joined by white mountain laurel (Kalmia latifolia) with a trim red inner band. The dogwood is claimed by North Carolina and Virginia, while the mountain laurel belongs to Connecticut and Pennsylvania.

And finally there is ‘Felicity’ Black Eyed Susans with Peach Blossom and Trailing Arbutus. Similar in size to the others at 5.5” high and 6” long, it was produced from 1976 to 1978 and closed at a very slightly higher price than the others ($355.) The states represented are Maryland by the black-eyed Susan (Rudbeckia), Delaware by the peach blossom, and Massachusetts by the trailing arbutus (Epigaea repens.)

See the Flowers category for the other botanical Cybis sculptures, as well as several plaques and plates.

Images of Cybis porcelain sculptures are provided for informational and educational purposes only. All photographs are copyrighted by their owner as indicated via watermark.  Please see the copyright notice in the footer and sidebar for important information regarding the text that appears within this website.