Cats and dogs were both represented in porcelain by Cybis, although less than a dozen designs were created in either category. The majority of those sculptures were produced by the modern (post-1960) studio although there are earlier examples. In fact, there are two feline designs dating from the Cordey era. 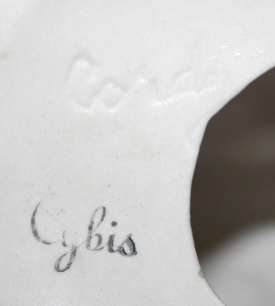 There were two cats produced during the Cordey/Cybis era – one sitting upright and one reclining – and two sizes of at least one of them. Although all of the Cordey cats have the Cordey mold impression, some were also stamped Cybis which can be a rough indication of date: the Cordey/Cybis pieces are definitely from the second half of the 1940s. The larger (8.75” high) cat in the photo above has the Cordey impression only, but the smaller (8” high) one has the Cordey impression plus the Cybis stamp. Both pieces have the high glazing typical of the studio’s work during the 1940s and 1950s. 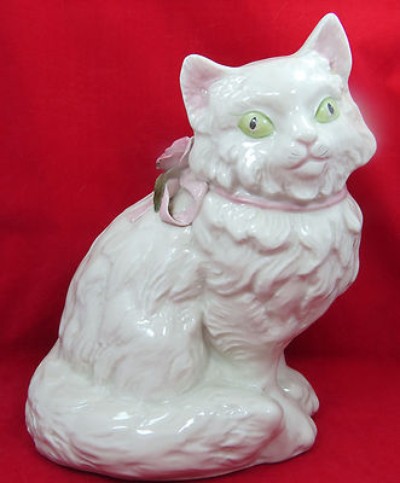 Here is the larger Cordey cat in white, with brilliant green eyes and a pink ribbon/rose collar. This larger version is 7” wide, 4.5” deep, and weighs slightly more than 2 lbs. 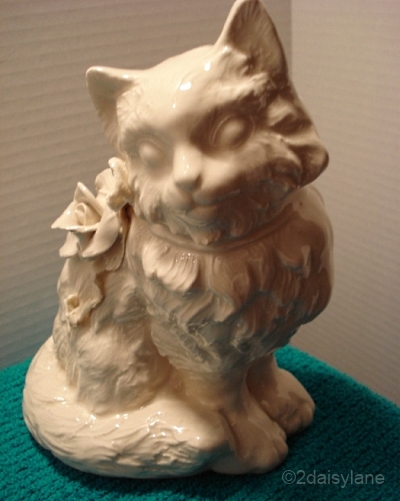 This all-white Cordey cat has a slightly different ribbon/rose decoration; it is more to the front than the other examples, and appears from the photo to have one of the streamers hanging down instead of formed into a loop. The decorative ribbon, flower, and lace elements on Cordey pieces often varied because they are all hand-formed. The seller of this piece gave the size as being 8.5” high overall which is a bit shorter than the typical 8.75”–9” but not significantly so. 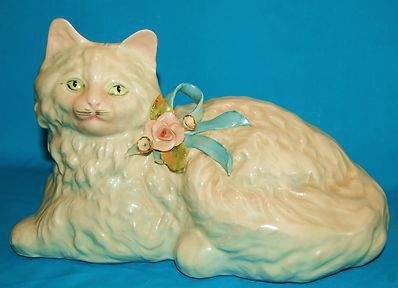 This reclining Cordey cat is 6.5” high, 10” long, and 5” deep front to back. It’s not known whether there were two sizes of this design. 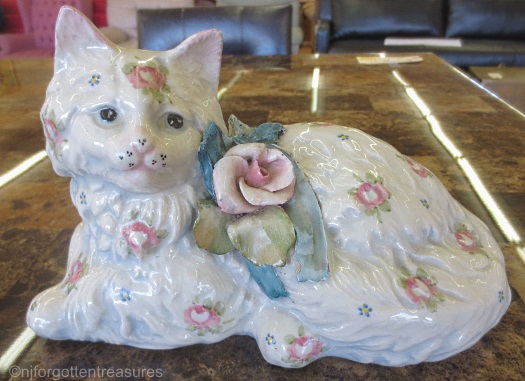 Here are two examples of the same reclining Cordey cat with the addition of pink roses and small blue flowers sprinkled over the body area. Some of painting details varied from piece to piece, such as the eye color (green or blue), ribboned corsage, and whisker area. 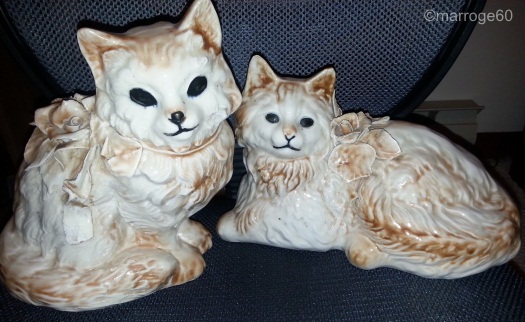 These two Cordey cats are accented with coffee-colored (almost but not quite sepia) highlights. The apparently solid black eyes, however, seem very out of character compared to the other examples I have seen; I see no logical reason for the eyes to have been painted in this heavy-handed way. In fact I’ve never seen a color Cordey or Cybis piece with solid (‘blank’) eyes, so it’s rather a mystery.

The earliest cat that I have found bearing only a Cybis mark dates from the 1950s. All of the Cybis cats, except one, were nonlimited editions. They were also all domestic cats; the studio never made any of the “big cats” such as tigers or lions for retail sale (there is a prototype Lion in the Menagerie post that was never released.) 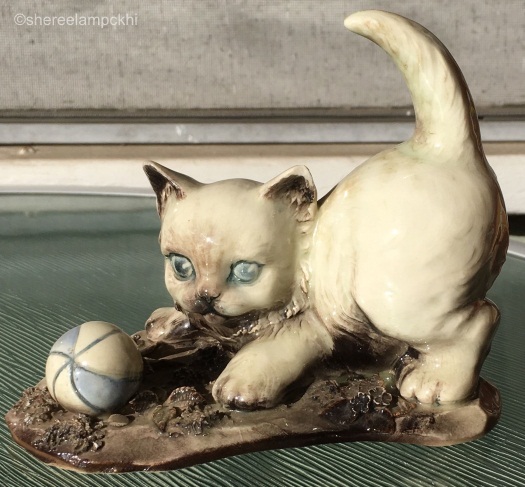 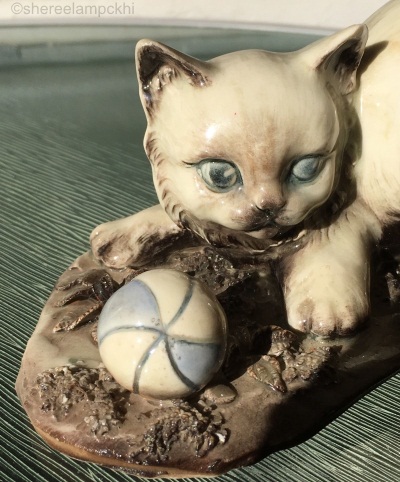 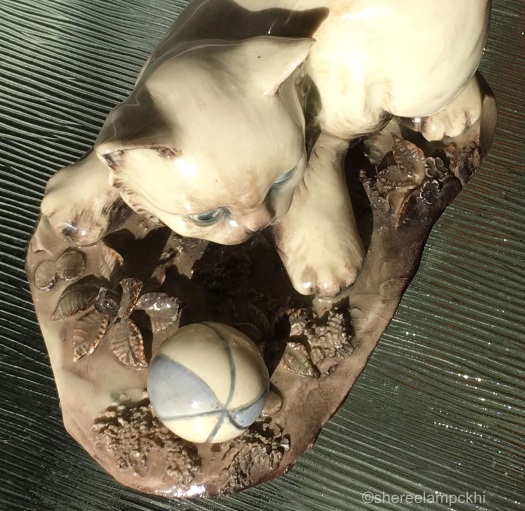 Like most of the 1950s Cybis pieces, this kitten with a ball utilized a Holland Mold. It has high glaze and also the brown shades seen on many of their 1950s pieces, although the brown on this piece is darker than average; see the Woodlands Bear Scene shown in Bulls and Bears for a more typical example. There is so much dark brown on the base of this piece as to make it appear distinctly muddy. It is just over 4.5″ high and the base is 6″ long. 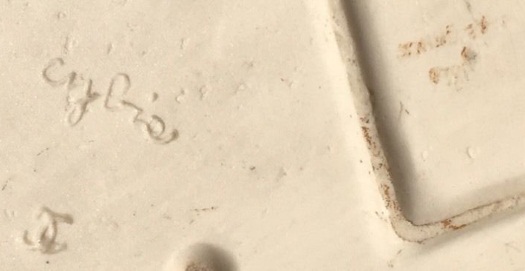 This particular kitten shows a couple of unusual markings on the underside. The faint reddish brown stamp says “Cybis Fine China”; a more typical paint color for this was blue, but black and this reddish color were also used. The Cybis signature is the less common convex (raised) type, and the piece also has the double-C mark as well. Signatures and Marks shows all of the known Cybis marks and their dating. 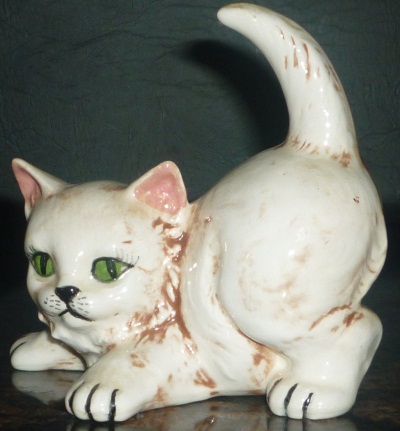 This is the original Holland Mold Company mold that was used for the Cybis kitten, here produced by a hobbyist. When Is a Cybis Not a Cybis delves into the subject of Holland Molds and the 1950s Cybis porcelains. 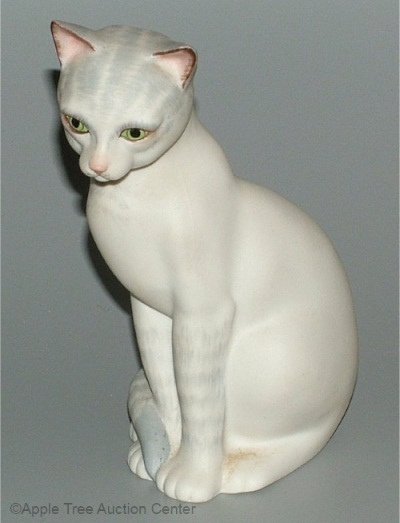 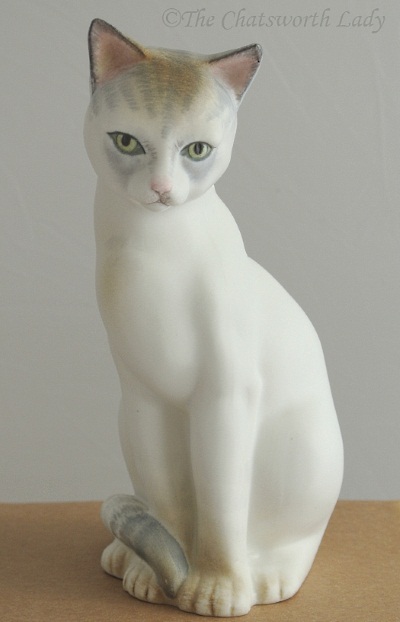 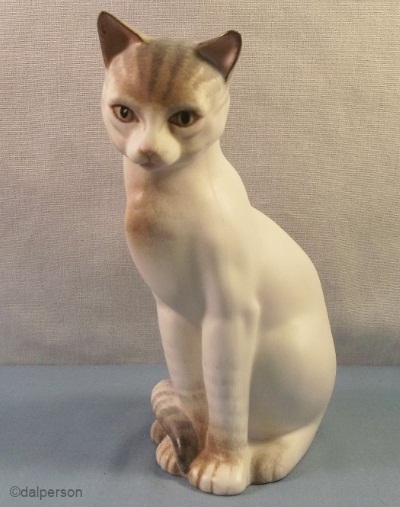 This first modern-studio Cybis feline was named simply Cat, is 6” high and was produced as an open edition from 1961 to 1965; it sold for $20 during that span. The decoration varied individually as to the percentages of grey and golden brown shadings used. From 1960 onward, all Cybis porcelains have an unglazed (bisque) finish. 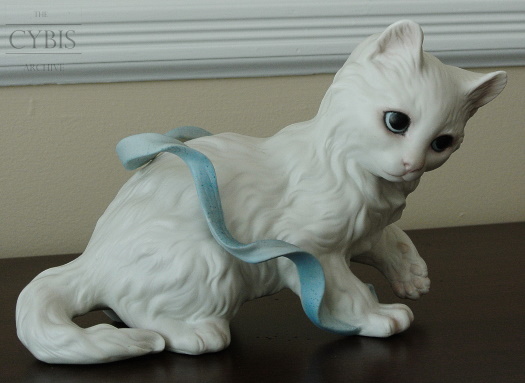 This sculpture is universally called the Kitten with Blue Ribbon by collectors even though a Cybis catalogue lists it simply as “Kitten.” Designed by Lynn Klockner Brown, s/he was made only from 1967–1969 and at $95 throughout. Measuring 6” high and 9” long, this piece commanded $350 on the secondary market by the late 1970s!

After the retirement of the Kitten with Blue Ribbon there were no available Cybis felines for the next six years. In 1975 two colorways of a sleeping kitten were introduced; the orange version is Topaz and the grey is Tabitha. Their introductory brochure gave the full name as “Sleeping Kitten ‘[name’]” although Cybis later dropped the first word. Their introductory price was $65 each, which rose to $90 when they were likewise retired in their third year (1977.) The sculpture is 3” high and 5.5” at the widest point. 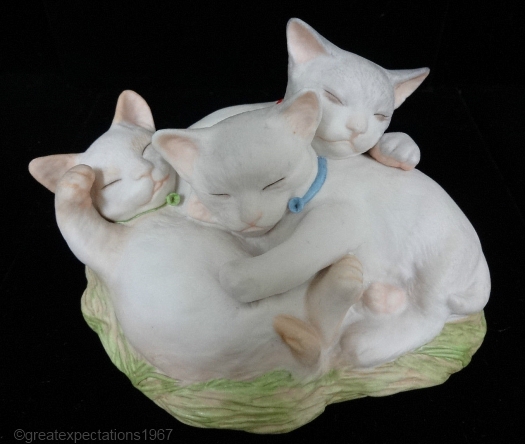 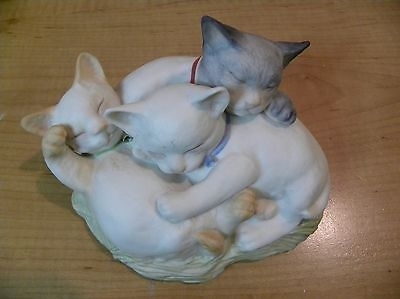 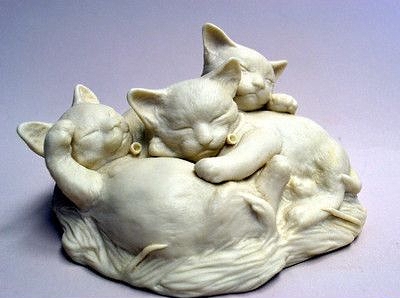 There followed another several feline-free years until Taffy, Toffee and Tiger appeared in 1982 for $195. The ‘footprint’ is 3.5” x 5” and it is about 3” high. The example shown in the first photo is the normal retail edition; the version with the darker grey head and paws on one kitten is unusual; perhaps it was done on request for a customer whose cat had the same coloring? I originally thought that the plain white bisque example might be an unfinished blank but the seller cited it as having the standard Cybis signature (although included no photograph of it.) This piece was retired before 1988. 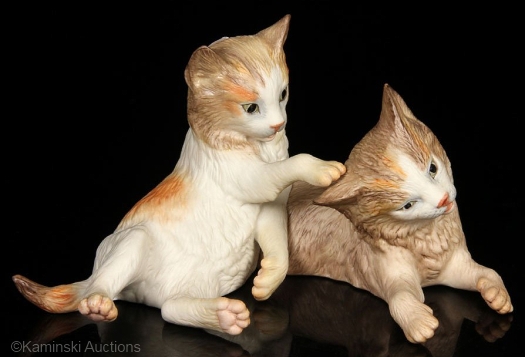 Kittens ‘Ruffles and Truffles’ is the only limited edition cat study that Cybis ever produced. Introduced in 1983 and completed before 1988, the issue price was $385. This is another piece about which there is confusion regarding the issue size. Various sources (none of them from Cybis) have cited the edition size as 750, 500, and 400! Unfortunately one cannot reliably determine issue size by means of sculpture numbers (see Edition Size Discrepancies for an explanation). Given that they were produced for less than five years, my guess is that the final edition size was no more than 400, if not less; the “400” may in fact be what it was ultimately closed as. Measurements are 5.5” high x 10” long x 7.5” deep. 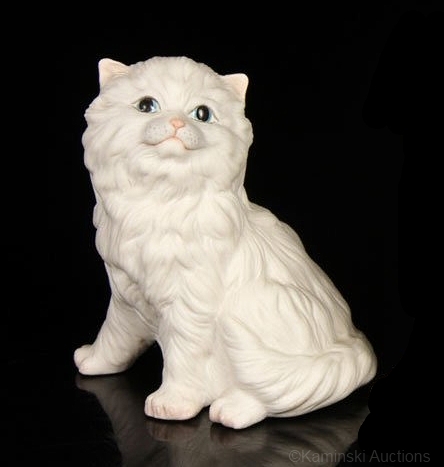 A nonlimited cat study issued in the same year (1983) is Chelsea who is clearly a Persian. This is the sculpture that strongly reminds me of the early Cordey model. Priced at approximately $175 initially, by 1993 this had risen to $275 and then $295 in 1995 at which price point she remained. Chelsea is 5.5″ high.

The grey-shaded Chelsea on the left was either a color-test piece or was painted for someone as a gift, and is probably one of a kind. 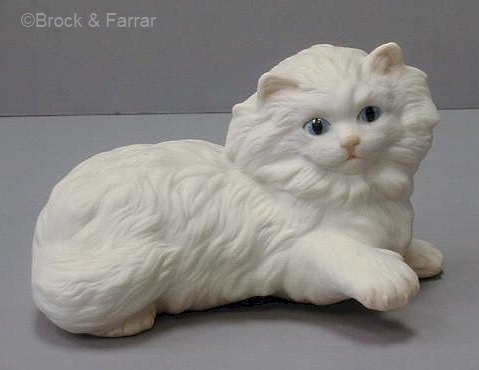 The following year (1984) saw the introduction of Chantilly at $175; perhaps she too was inspired by the Cordey felines? She is 4” high and matched her “sister” Chelsea in pricing. During the early 1990s the studio indeed offered them as a pair, for $495 which was a $55 discount from their individual price points; this option was discontinued before 1995. 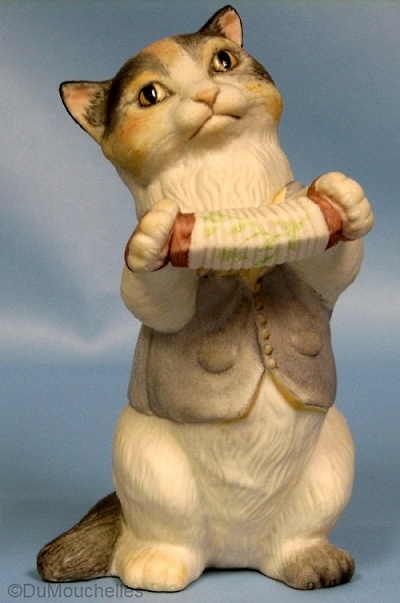 The final Cybis cat is also the only anthropomorphized design. Cal the Musical Cat appeared in 1987 for $250 and was billed as the fourth member of “The Cybis Musical Menagerie Quartet”; all may be seen in the Music and Opera post. Cal is 6.5” high and sold for $295 from 1990 onward. (Designed by Steve Zuczek.) 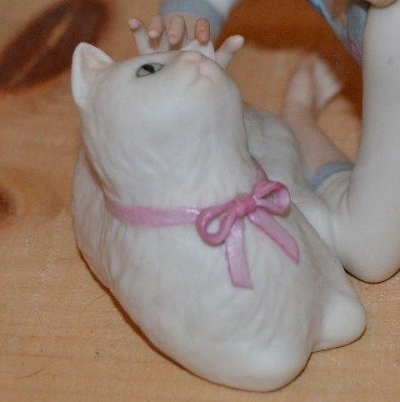 Only one Cybis sculpture ever included a cat as a secondary element: Suzanne, an nonlimited edition issued in 1980 which is shown here along with the other “children” pieces. The cat is 1.5” high and 3” long.