Isn’t it odd how one mystery can lead to another, entirely different, one? Such was the case with a puzzling single piece of Cybis that surfaced some months ago.  It was among a private collection being liquidated by the family of an enthusiastic collector who also knew the studio owners personally from the 1950s onward. 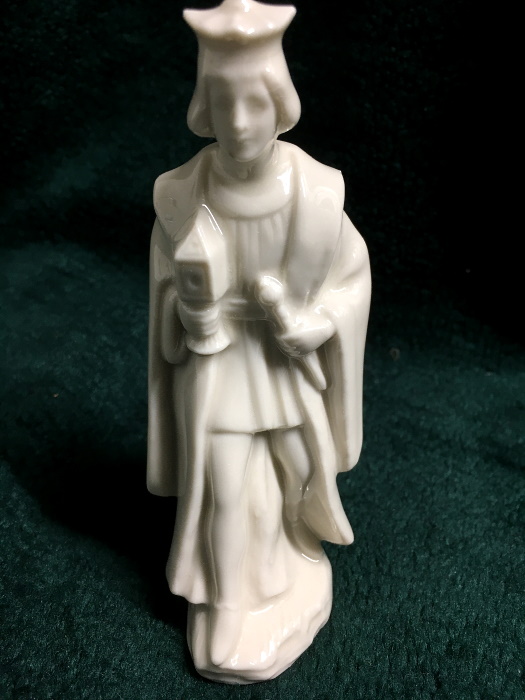 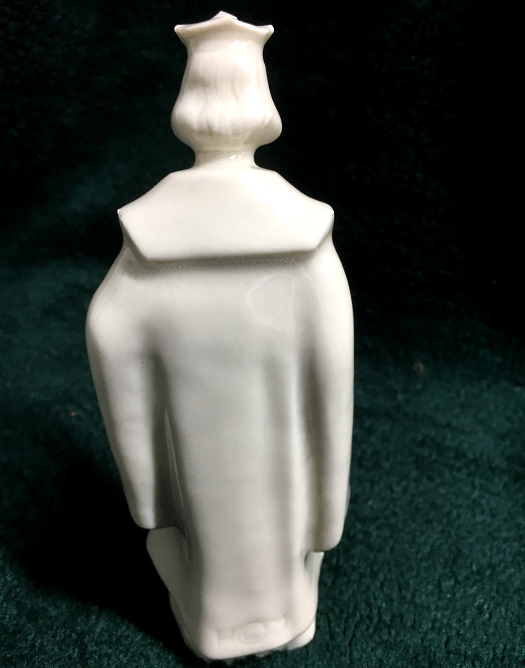 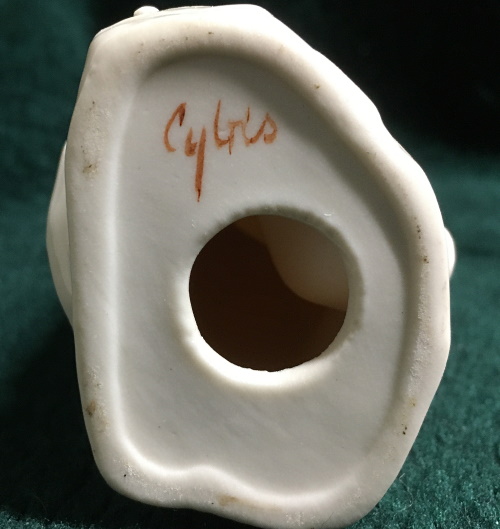 It was apparent from the workmanship that this was a 1950s piece, although the brown hand-painted signature may date from the second half of that decade. My initial impression, based on the clothing style and especially his hairstyle and hat, was that he was meant to represent someone from the Tudor era – think Henry VII or VIII. Knowing that many 1950s Cybis pieces were religious subjects, perhaps this was supposed to be Sir (later Saint) Thomas More? 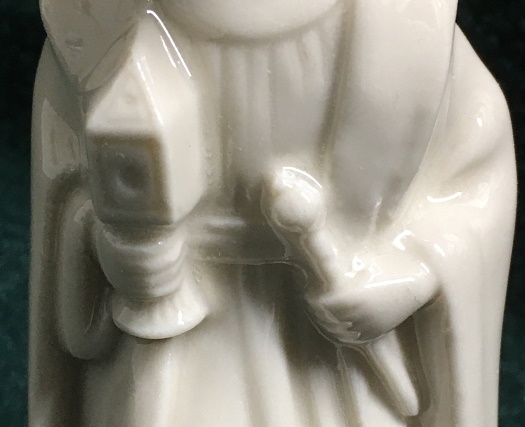 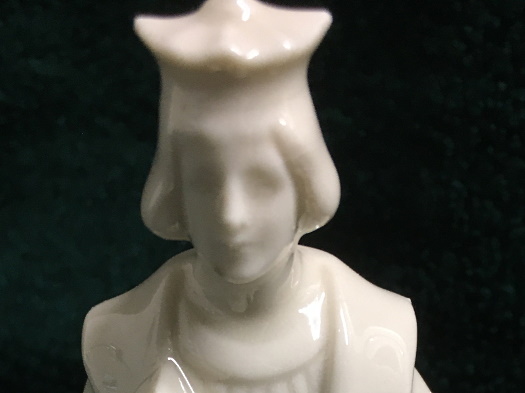 The main problem with that theory was, of course, his ‘accessories’ because representation of Thomas More simply don’t show him carrying a staff or what appears to be a dreidel on a stick! I wasted a good hour looking at representations of various Renaissance-era saints, and of course nothing matched. Who the heck was this guy?? 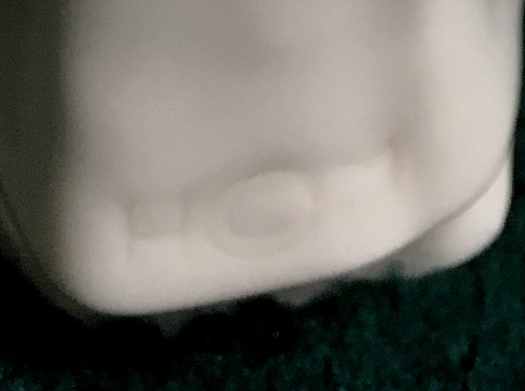 Then I noticed the mold impression on the back hem of his robe: H©M, which sounded like a good shorthand for Holland Molds. Normally their molds included their full name as Holland © Mold, on the underside but of course Cybis would and did remove that from their Holland-Mold-cast items. However, someone clearly forgot to also eliminate the shorter version from this one.

It turns out that the Holland Mold Company produced two different sets of nativity molds: One set during the 1950s, and another during the 1960s and beyond. 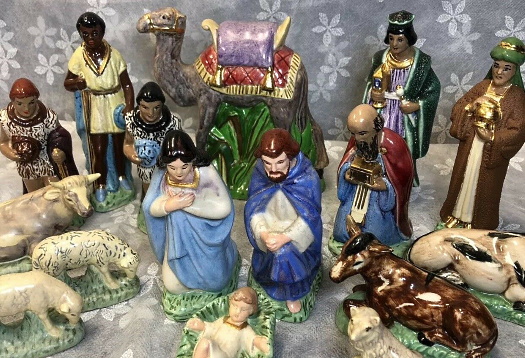 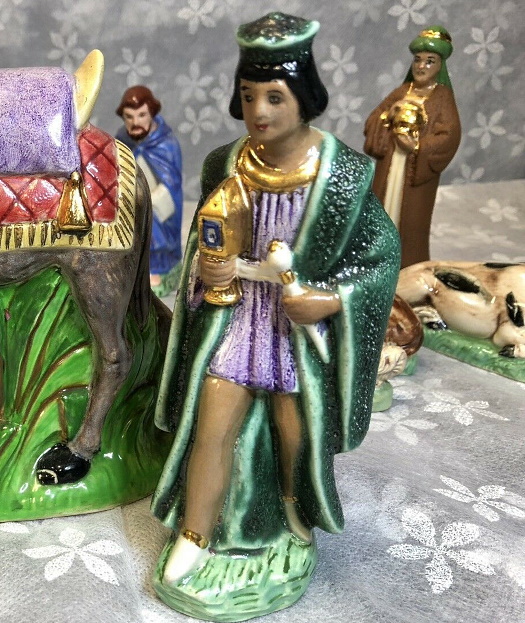 And there is our “Tudor guy” amongst all of the nativity pieces. The hobbyist who created this set conveniently dated each piece Dec 54 on the underside, proving that Holland was selling these molds at the same time that Cybis was buying many other molds from them. 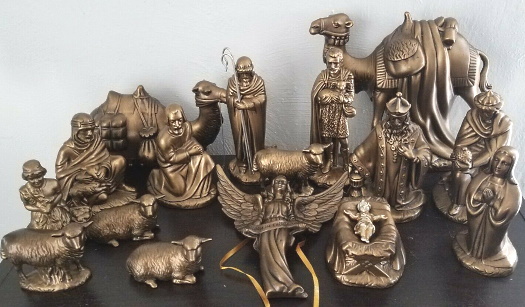 At some point during the 1960s, Holland changed their nativity series mold set to this one. I have found photos of hobbyist sets with dates in the mid and late 1960s and also various years during the 1970s. A 1975 Holland Mold catalog includes these pieces. This was the final iteration of their nativity mold series. 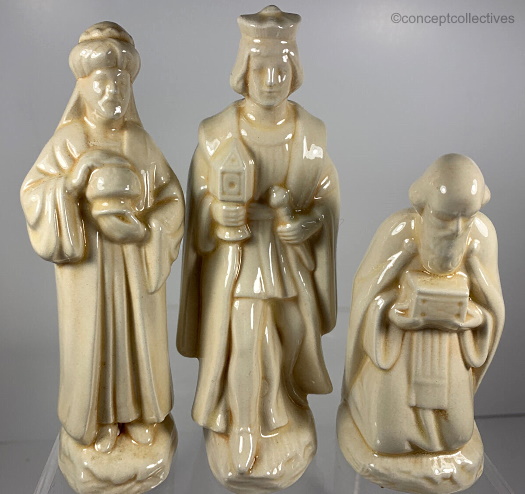 The 1950s set includes one king, possibly a second, and the third figure who is probably supposed to be a wise man because he wears no headgear. What I thought looked like a dreidel is actually a censer for the frankincense! 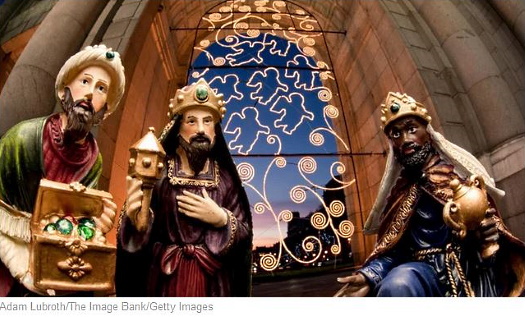 And here’s an image that is a pretty darn good match for the 1950s Holland Molds. 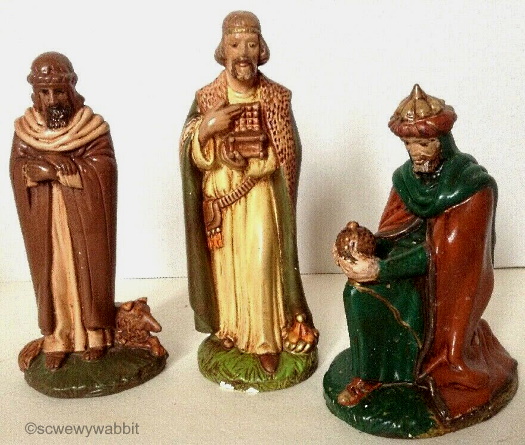 Now that we’ve discovered who the mystery fellow was, we have another one to solve, which is…

Did Cybis Create Two Nativity Sets During the 1950s?

The existence of just one king/magi/wise man makes no sense unless he was part of a set, but I’ve never come across any mention or photo of any Cybis-marked item that matches any of the other molds in that Holland set. As we know, the Cybis studio used the nativity set produced by the Atlantic Mold Company to create their circa-1950s Nativity Murals. 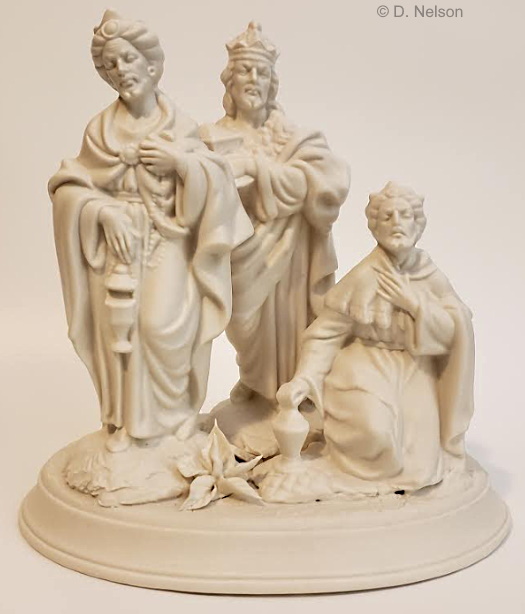 Frankly, when comparing the 1950s Holland Wise Men with their Atlantic Mold counterparts, is that any kind of surprise?

So, in the immortal words of Adrian Monk, “Here’s what [I think] happened.”

In the 1950s, when the Cybis studio decided to produce a series of nativity pieces, they bought a set of molds from at least two local companies: Holland and Atlantic, both of which were operating during that decade. The studio no doubt cast a full set from each, as a test, and then decided to go with the Atlantic Mold pieces – or so we can assume, because I have never seen any reference to, or photo of, an early Cybis nativity-series piece other than the murals.

The first question then becomes, what happened to the other 11 pieces (a camel, two more wise men, shepherd holding hat, shepherd holding crook, Mary, Joseph, Jesus, lamb, cow, and donkey) that Cybis also cast at the same time as Balthasar (whom legend credits with giving frankincense)? Did the same collector buy the entire test-set at some point? If so, what happened to the other pieces?

Of course, this assumes that only one set was cast from the Holland molds, to compare with a set they cast from the Atlantic molds. But what if the Atlantic set came along a bit later, and thus Cybis actually offered the Holland pieces at retail? If that was done for a year or less, the studio might have chosen to ignore their existence completely, and only acknowledge their final choice: the Nativity Murals. If the Holland-mold items were a sales dud, that would explain why no other pieces have turned up on eBay.

Before anyone dismisses the “ignored by the studio” theory, remember that they did the exact same thing regarding Cordey! Nowhere in any Cybis literature is Cordey mentioned or pictured, nor any of the Cordey-style pieces that were made and sold with the signature M. B. Cybis on them. If the Holland Mold nativity pieces were not something the modern studio was proud of, it was easy to sweep their existence under the rug – especially if those were only produced for a very short time.

If anyone happens to have any Cybis-marked piece that matches the appearance of any of the molds in the 1950s Holland set, I’d love to hear from you because that would support the “retail items” theory rather than the by-default “test set” theory. The 1950s Cybis pieces can be either glazed or bisque (matte) finish, and either plain white or decorated with color. There is a contact-form page link below. I’d really like to know whether ‘Balthasar’ has any companions out there! 😊