Far fewer circa-1940s drawings by Boleslaw Cybis have been found, no doubt because he was busily engaged in settling into his new life in America. Only one item shown below is actually dated as that decade, although several have been attributed (by outside sources) to that timeframe. 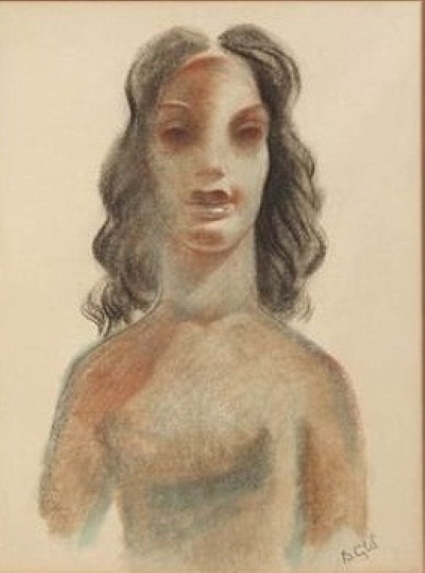 This pastel-on-paper drawing of a long-haired woman was described by the seller only as “after 1939”. It’s unclear whether the dimensions of 16″ wide and 22″ high referred to the image only, or to the overall framed size.  Signed B Cybis in pencil at the lower right.

Kamelot Auctions listed this pencil and watercolor drawing under the title Blue Pearl in March 2020, as per that penciled title on the framing backer. Signed B Cybis in pencil, the woman’s clothing style fits with the 1940s; the image area is approximately 13” x 11”. The local Trenton framing shop (“Collectors Gallery”) also stamped the backer; the inclusion of a zip code (06618) in the address indicates that the framing was done after 1963, possibly shortly before the studio operation moved into the new building on Norman Avenue in 1969. The backing was in poor condition, showing water damage and spots of black mold. It also has a penciled number 25 on the backer as well as a small P-Touch label with the same digits; no clue as to what this represents or who applied it. This item was later listed for sale in Poland by DESA Unicum a few months later (December 2020) with the offending backerboard removed. 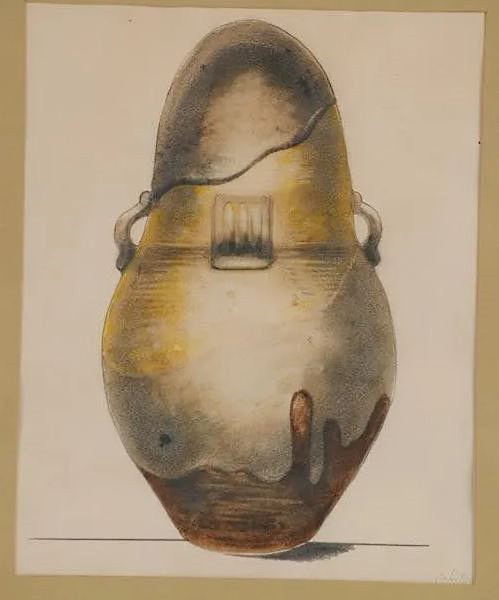 This mixed-media drawing of an amphora has a rather ‘archeology/antiquity’ style about it. The framing backerboard was in the same poor shape as Blue Pearl and had a P-Touch “22” applied to the edge of the wood frame. Signed B Cybis at the lower right, the image size is the same as Blue Pearl (approx. 13” x 11”) which was in the same 2020 Pennsylvania auction. This item too was later offered by DESA Unicum, in February 2021 with damage to the edges of the frame and the original backerboard removed. This photo of the drawing removed from the frame is from the Kamelot sale and was not oriented properly. 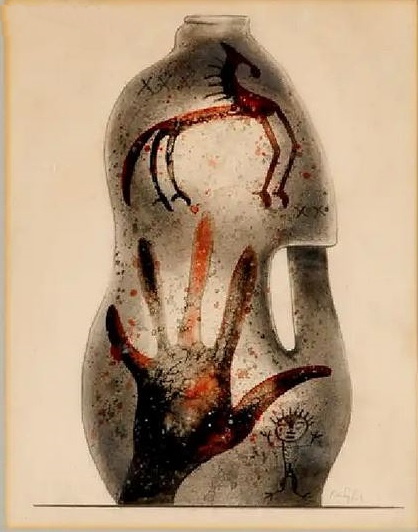 A similar drawing of the same size, in the same sale, was listed by Kamelot as “Hand in Jar” but a more accurate description would be jar with primitive Lescaux-style motifs; signed B Cybis at lower right. The vessel shape instantly reminded me of a plastic gallon-size milk container, although I don’t think they had those during the 1940s!

The 1970-71 Cybis in Retrospect museum exhibit catalog mentioned “graphite pencil and watercolor renderings by Boleslaw Cybis illustrating preliminary designs for vases with classical motif, c. 1943” but included no photographs. I don’t know if either of the foregoing would fit the description of “classical motif”, although perhaps the Amphora might.

This fourth drawing in the same size and identical framing as the foregoing was described by Kamelot as a “talisman doll” but it could also be called a Female Fetish. The backer board on this one has the Collector’s Gallery shop stamp on it. It also has a #23 notation in pencil and as a P-Touch label. Just barely discernible next to the framer’s stamp is a faint penciled notation saying Indian doll, probably added by someone at Cybis during the 1960s because it is so faded.

One of the relatively few original pieces of art in the 1970-71 Cybis in Retrospect museum exhibit were two conte drawings, both described as circa 1940 but not pictured in the catalog. They were loaned to the show by Marja Cybis’ brother and sister-in-law, Casimir and Helen Tym. One is a drawing of two large trees, named Twins; the other, titled Lost, shows “a stallion in the distance.” These were done in the same medium as the original Folio One drawings and were approximately the same size (18″ x 24″.) At least they will be easy to identify if either of them ever show up for sale online in the future!

A real oddity in the show was a trio of framed black-and-white photocopies of original sketches by Boleslaw Cybis illustrating “heating ducts in studio for distribution of heat, c. 1942”. This would have been the Church Street studio although it’s not known which building(s) were depicted. It was probably one of the two accessory buildings because the brick carriage house containing the kilns was already brutally hot due to their operation. 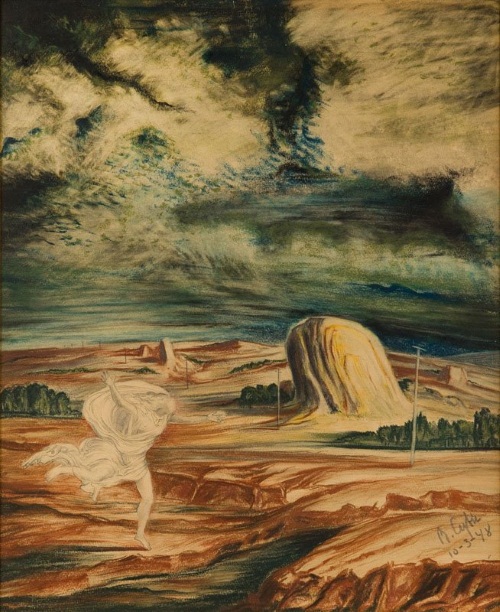 Running Woman is signed and dated: B. Cybis and 10-3-48 at the lower right and also a faux signature (see the 1930s Drawings post for an explanation of the these) Boleslaw Cybis on the reverse side. It was described as “gouache, pencil on paper” and measures roughly 18″ x 23”. At least we have a firm date on this one (either March 10th or October 3rd, depending on whether Boleslaw’s date notations had become Americanized.) This item was sold at auction in Poland by DESA Unicum in September 2015.

This undated, drypoint pencil drawing showing an entwined man and sea creature measures approximately 6” x 7.5”. I am assigning to the 1940s based on some similarity of design to both Running Woman and the oil painting titled Time, whose interesting history is related in the Paintings, Part One post.

More circa-1940s drawings will be added to this post if/when discovered.